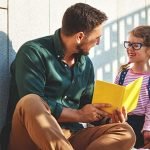 Building the bond between fathers and kids with learning difficulties

Here are tips for dads to help them be more actively engaged in the life of their child with learning disabilities.

Ever since our son, Alex, was little and I was taking him from tutoring to speech therapy to therapeutic swimming, the overwhelming prevalence of women in those settings was impossible to ignore. In waiting rooms, on the sidelines of swim and horseback riding lessons, and in parent support groups, moms were everywhere. Articles, brochures, and even books offered advice on everything from potty training to classroom accommodations. But, always, the target audience was the mother.

It is no wonder, then, that fathers often feel excluded. And in families where kids have learning disabilities (LD) or Attention-Deficit/Hyperactivity Disorder (ADHD), the related emotional and academic problems can leave fathers feeling even more excluded from the family dynamics.

“All the literature is very mother-focused. There is a real shortage of information and support for fathers,” observes James May, program director for the Washington State Fathers Network. “I’m amazed at the number of calls I get from men saying, ‘I can’t find any resources designed for me.’ So often there is a feeling of, ‘I guess I’m not important.’ It doesn’t help that you walk into agencies and there are no pictures of men and their kids on the walls. It’s easy to see why fathers feel isolated.”

Traditionally, it has been the mother who has carted children from school to lessons to play dates. And while more dads are involved in their children’s lives today than ever before, the gap is still great, particularly for those fathers whose children struggle in school.

“I tried early on to be really involved in my son’s life at school and at home,” says one San Francisco Bay Area father of a 12-year-old son who has attention and motor problems. “It just seemed to backfire. Every time I made a suggestion or tried to get involved, my wife would give me ‘the look.’ It was like I couldn’t do anything right, and since she was home with our son the most, I finally just backed off.”

This is a common scenario, say family therapists. And the longer it goes on, the harder it is to change the way fathers interact with their children with learning difficulties.

One factor that complicates the picture, says Stanford Children’s Health Council Executive Director, Christopher Harris, is the fact that the father is often the parent whose genetic history causes dyslexia (one type of learning disability), which may be passed on to his child. “From the dad’s perspective,” Harris explains, “if he had a miserable time in school, living through it again through his child is a painful déjà vu.”

What often happens, Harris says, is that the father withdraws from the pain of looking back, or feels unsure how to intercede, because in many cases, the mom has already taken charge. Add to that the historic stereotype of the strong, invulnerable man, and things only become more difficult.

In the case of the stay-at-home mother and the father who works outside the home, it is even easier for the mother to become the “do-er,” and the parent who is most knowledgeable about the child’s struggles.

“My wife was the expert,” says Robert, who has three children, one of them severely dyslexic. “Whenever there was a school problem, or a problem with making friends, she would have read the latest articles or talked with our counselor, so she would just handle it. The more she did it, the less I was involved.” Another complicating factor can be when men try to suppress or deny their feelings about their child’s struggles, Harris says. “They’ll say to their child with learning difficulties, ‘I overcame this thing, why can’t you?’ and that can put even more distance between them.”

Why kids need their dads

The U.S. Department of Education is working to get fathers more involved because it is known that children enjoy school more, and do better, when their fathers participate. Research also shows that children whose fathers are not very involved in their daily lives are more likely to drop out of school and to have problems developing relationships of their own. Especially in the life of a child who has learning and emotional issues, the alliance with dad is crucial, say child development experts.

Bringing dad into the picture

If your family is one in which mom is still the authority and the main participant when it comes to your child with learning difficulties, there are steps both parents can take to change that, say experts. Here are some suggestions:

Be the dad who shows up

In the end, whether you are the best-read expert on your child’s problems is much less important than that you are consistently present and involved with him, experts have found.

At my house, we have, over time, found ways to divide the tasks and activities related to our son. My husband is the golfer and the basketball player, so he shares those activities with Alex by coaching or just going out to play. I’m usually the one who reads aloud and helps with book reports. But when it comes to meeting with teachers or counselors, we both make time.

Eric Speitzel, whose two grown sons both have dyslexia, says he has always made time to be around. What has bothered him is the continuous lack of understanding of other people about what it is like to be a father of children with LD. “Over and over I’d hear, ‘Your kids are lazy,’ or, ‘They could do that if they just tried.'” He says “I’m not dyslexic, but I did everything with my sons. You have to find ways to get involved and be a part of what’s going on. You have to try to find out what it’s like. Everybody should do a simulation (a program with exercises designed to simulate what it’s like to be dyslexic, put on by organizations like Parents Helping Parents). It’s about hanging in there with your kids. You just can’t give up.”

“My 8-year-old daughter and husband have LD. My husband wasn’t told when he was younger and he just felt stupid. He has dyslexia. The effects of not feeling like everyone else are still with him. Now my daughter is going through the same thing. He didn’t want to help her at first. I explained that although I do my best I can’t understand what she is going through. He does. So, he started helping her. She is doing so much better and feels better about herself because her daddy has LD too. He isn’t stupid so she knows she isn’t either. Since he started helping her, her grades have gone up dramatically. I am so happy that my husband got involved, it really made a difference for our daughter.” – Jennaren