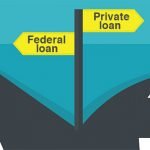 What parents and students need to know about federal vs. private student loans

Here are four big reasons to choose federal student loans over private loans (when you can).

With college getting more and more expensive, many students (and their parents) are taking out student loans. At the end of the 2014 school year, nearly 70 percent of students had loan debt — and the average balance owed was a whopping $28,950. And that’s just for students who attended public and private nonprofit colleges; the average debt load for students who attended private for-profit schools is even higher.

You and your child put a lot of time and effort into choosing a college. After all, not all schools are the same. Well, not all student loans are the same, either, and it pays to spend some time learning about your choices before you choose.

There are essentially two types of student loans: federal loans and private loans. Federal loans are funded by the federal government and include Direct Subsidized Loans, Direct Unsubsidized Loans, Direct PLUS Loans, Federal Perkins Loans, and Direct Consolidation Loans. Private loans, on the other hand, may be funded by banks, credit unions, universities, or even state agencies

No matter how tempting private loans look, experts warn you to make them your last choice.

“Students should use federal student loans as their first option to pay for college,” says Diane Cheng, associate research director of The Institute for College Access and Success (TICAS), a nonprofit devoted to making higher education more affordable and accessible for all students. “Private loans should be their last resort.”

At a glance: comparing federal and private student loan terms

Here are some general guidelines covering the differences between federal and private student loans, according to the U.S. Department of Education. Of course, your individual loan offers may have slightly different terms, so always read the fine print.

Federal: Not in most cases
Private: Often you need a co-signer

Federal: No, no penalty paying back your loan early.
Private: Sometimes there is a penalty for paying your loan back early.

Federal: Yes. You don’t need to begin repayment until you leave school.
Private: No

Eligible for loan consolidation after graduation?

Stafford Loans are the most common form of federal direct student loan. They come with fixed interest rates of about 4 percent; students don’t have to repay them while they’re enrolled in school, and there are flexible repayment options. These loans can either be subsidized or unsubsidized. In general, subsidized loans have slightly lower interest rates and are restricted to students with demonstrated financial need. Also, the government pays the interest on subsidized loans while the borrower is still in college or has a deferment. Unsubsidized loans are more widely available, but the borrower must pay all interest on the loan from the time of disbursement and the interest rate is typically a bit higher.

PLUS loans are federal direct loans for graduate students or parents of dependent undergraduate students. The borrower must qualify for financial aid and have a decent credit history to be eligible. Interest rates are currently fixed at 7 percent. It’s possible to borrow up to the cost of the education minus other financial aid received.

In the past, students with financial need were also eligible for a Perkins loan. Congress let the Perkins program expire on September 30, 2017, so these loans are no longer being made.

You must fill out the Free Application for Federal Student Aid (FAFSA) to qualify for federal student loans.

Cheng recommends that students borrow the maximum amount of federal loans they are eligible for when they receive their college award letter before considering other kinds of debt. Many students take out private loans before maxing out on their federal loan possibilities, she says. “When we looked at the most recent national data, almost half of undergraduates who had taken out private loans hadn’t taken out all they could in federal loans first,” says Cheng.

“More needs to be done at the college level and by the students to make sure that they know there are safer borrowing options available,” Cheng says.