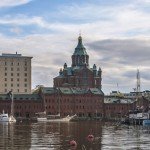 No shoes but plenty of service: The surprising features of the world's top-performing schools.

Can you name a famous person in Finland? Historical episode? Imposing landmark? Foodstuff? It’s not that Finland doesn’t have its share of Olympic athletes, brilliant architects, and technology moguls, but “Nokia” is all most people can mutter when asked about this small northern nation.

Unless you’re a teacher. Then the word “Finland” fills you with awe. Because everyone in the schooling profession knows that Finland is the international all-star of education.

In 2006 the Programme for International Student Assessment (PISA) conducted a survey of 15-year-olds’ academic skills from 57 nations. Finland placed first in science by a whopping 5% margin, second in math (edged out by one point by Chinese Taipei), and third in reading (topped by South Korea).

Comparisons that involve so many variables are … difficult. Some might say impossible. Still, just a glance at PISA’s scores year after year prompts the question: How does Finland churn out so many avid learners?

“No sweat,” except in the saunas

At first glance, the Finnish educational system looks like it would only produce hippie slackers. Check out the casual amenities: Schools often have lounges with fireplaces but no tardy bells. Finnish students don’t wear uniforms, nor do they often wear shoes. (Since Finns go barefoot inside the home, and schools aspire to offer students a nurturing, homey environment, the no-shoe rule has some pedagogical logic.) And although academic standards are high, there’s not the grind one associates with high-performance schooling. Never burdened with more than half an hour of homework per night, Finnish kids attend school fewer days than 85% of other developed nations (though still more than Americans), and those school days are typically short by international standards.

Finnish teachers enjoy an equally laid-back arrangement. They work an average of 570 hours a year, nearly half the U.S. total of 1,100 hours. They also dress casually and are usually called by their first names (Aino, Helmi, Viivi, Eetu, etc.).

Is the secret massive financial investment? No. Finland spends only $7,500 per student, considerably less than the United States’ average $8,700.

So how does Finland produce the world’s best young scholars via minimal hours and cash? Since PISA began ranking nations and revealing Finland’s special sauce, plane-loads of inquisitive teachers from every corner of the globe have been making pilgrimages to this educational mecca. Here’s a taste of what they’ve observed:

The level of respect accorded to Finnish teachers tends to grab attention, especially in America where teaching is viewed as a “fallback” profession occupied primarily by the lower third of college graduates. That equation is flipped in Finland, where teachers boast the highest vocational status (followed by physicians.) A full 25% of Finnish youngsters select teaching as their career goal, but only a fraction succeed. Only 10% to 13% of applicants gain acceptance into the masters’ degree in education program.

After all this hard work, the rewards are generous, but not necessarily financially so. Teachers earn a generous $45 to $50 per hour for elementary school, $75 to $80 for secondary school. Yet some far lower-performing nations such as Spain and Germany pay teachers more. Instead, Finnish teachers enjoy immense independence. Allowed to design their own lesson plans and choose their own textbooks (following loose national guidelines), Finnish teachers regard their work as creative and self-expressive.

Finnish toddlers have access to free preschools supervised by certified college graduates. Ah, you wonder — are the little innocents getting a jump-start there, reading and writing all day? Wrong! Truth is, Finland’s preschools offer no academics but plenty of focus on social skills, emotional awareness, and learning to play. Remarkably, Finnish children don’t approach reading until age seven (Waldorf nation?). They learn other concepts first, primarily self-reliance. One American observer noted that first-graders were expected to walk unescorted through the woods to school and lace up their own ice skates.

Twenty colleges exist in Finland, and they’re all free. Imagine the financial relaxation this provides for both parents and children. Universities are not widely stratified either; the disparity between the “best” and “worst” is not terribly large.

Americans give lip service to the notion that “all men are created equal,” but our appetite for competition creates an intense focus on ranking low and high performers — whether they’re schools or students.

Finland downplays educational competition in a number of ways. Schools aren’t ranked against each other, and teachers aren’t threatened with formal reviews. At many schools, teachers don’t grade students until the fifth grade, and they aren’t forced to organize curriculum around standardized testing. Gifted students aren’t tracked into special programs, invited into honor societies, or chosen to be valedictorians. Instead, struggling students receive free extra tutoring. After ninth grade, students attend either an academic program (53%) or vocational one (47%) — this flexibility results in a 96% graduation rate, dwarfing the United States’ measly 75%. Finally, since there are no private schools to speak of, there’s no sense that the best students are being skimmed off the top.

Overall, such attitudes go hand in hand with Finland’s socialist-style egalitarian society, which focuses on meting out fees and services according to need rather than merit. Even parking ticket penalties are determined according to income: A wealthy sausage factory heir was fined $204,000 for going 50 miles per hour in a 25-mph zone!

Finnish schools lack some of the extracurriculars — such as sports teams or musical bands — considered so essential to U.S. high schools. But free lunches are available to all students. “School choice” doesn’t exist; everyone goes to the neighborhood school. Students learn at least three languages: Finnish, Swedish, and English. Finally, Finland is a culture of readers, with a great library system and book mobiles reaching even remote locations.

Although the Finnish system seems antithetical to South Korea’s (the Asian nation placed second in the 2007 PISA surveys), the two small countries share much in common. Both cultures hold teachers in the highest esteem. Both achieved independence relatively recently — Finland in 1917, South Korea 1946 — and both are resource-poor nations that decided education was the path out of poverty. Finnish and Korean languages are easy to read and spell; they don’t have the illogical phonetics of English.

Is it fair to compare the small, homogenous northern nation to our roiling melting pot of diversity? Many experts say no. After all, given our higher immigration rate and wider socioeconomic stratification, our schools tend to become social experiments not simply for learning but also for many other social functions schools aren’t designed to handle.

Still, should these challenges prevent us from learning what we can from Finland’s schools?  If nothing else, it’s worth noting the central importance of inspired, highly educated teachers and what keeps the United States from doing the same.