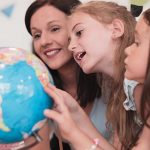 Your fourth grader and social studies

Fourth graders focus on their state history while mastering places, dates, and regions.

Who recalls the dates of the Byzantine Empire? Or that the Ohlone Indians spoke one of the Utian languages? Details from social studies are easy to forget once we graduate to the real world. Still, such primers in history, geography, politics, and anthropology are crucial to our children’s education, and kids can learn a lot in fourth grade social studies or history class

The focus in fourth grade history is on students’ home states. Fourth-graders also start to learn the basics of democracy — starting with local, state, and national governments — as they explore the rationale for rules and laws. Fourth-graders are introduced to early U.S. history, building the foundation for more in-depth study in future grades.

Students will learn to use a variety of resources, including social studies textbooks, the Internet, newspapers, and primary sources (letters, diaries, speeches, photographs, and autobiographies). You can expect them to make and use timelines, graphs, charts, and maps to interpret historical data and to complete projects that include interviewing, debating, researching, taking virtual field trips, and role-playing to reenact events. The class may go on a field trip to a history museum or the state capital.

“Children enjoy learning social studies most when it relates to their personal lives,” says teacher Tonya Breland, the recipient of a Milken Foundation National Educator Award. “As they learn about the history of their state and the early history of our country, it is important that they see the connection to their own life and culture. Social studies is inclusive of culture, customs, traditions and history.”

Fourth-graders are expected to learn about our country’s five regions, the Northeast, Southeast, Southwest, Midwest, and West. They should gain an understanding of the physical characteristics (canyons, cliffs, deserts, mountains, lakes, etc.), features, natural resources, history, and climate of these regions.

In addition, students will be expected to learn these regions’ cultures, including customs, food, and arts, while exploring how different cultural groups have contributed to the United States. Typical activities include researching a region to create a travel brochure, a PowerPoint presentation, or a student museum.

Children in fourth grade study state history by exploring culture, economics, and geography. They’re expected to identify the customs, celebrations, and traditions of various groups of people and to compare the way families lived long ago to the way they live now by surveying jobs, transportation, food, literature, art, values, and celebrations. Classrooms should also include lessons on early settlers and Native Americans.

To learn their state’s geography and physical features, students are sometimes asked to build a three-dimensional relief map and label mountain ranges, rivers, and cities. Other projects might include designing a brochure that highlights state history, facts, and points of interest or building a model of a historical building like the state capitol. Fourth-graders are also expected to know state natural resources and study the difference between renewable resources (for example, water and forests) and nonrenewable ones (coal and oil).

Fourth-graders spend time studying maps, and they should expect to know how to use an elevation or a climate map and learn how to interpret a map using the legend, scale, compass rose, and key. Children are often asked to compare maps to glean pertinent information — for example, a change in population growth or density over time.

In class children examine current issues and events around the world using TV news programs, newspapers, magazines, and the Internet. The class might discuss how events affect students’ lives or compare them to past events. Discussing current events raises students’ awareness of the world and helps them connect the present with history and with information learned in other subjects. It also increases your child’s ability to think critically and analytically.

A sample of students nationwide take the National Assessment of Educational Progress test — otherwise known as the Nation’s Report Card — in social studies in 4th, 8th, and 12th grade. The latest results are from 2006. The questions give you an indication of what students are expected to know, and the results tell you how students in your state are performing in comparison to their peers in other states. Below are sample test questions from the 2006 tests.

What you should expect your child to know by the end of fourth grade: