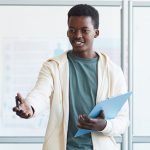 Why great high schools are designed to put students in charge of their learning.

At her old school, Estrella Rocha was lost in her own stress. Being an honors student felt like a status symbol, and she worried about her grades, checking them constantly on her phone.

The turning point came when, after transferring schools, Estrella started a self-directed project to explore potential careers. With the help of her advisor, she chose the medical field and volunteered at hospitals, interviewed medical professionals, and spoke with veterans about practicing medicine in the Navy. She even earned her EMT certification.

It was daunting at first to take on such an open-ended assignment, she says. But now Estrella is excited for school and has more confidence and motivation.

“To some degree, I think it’s [the] empowerment of being able to do anything I want,” she says.

Putting students in the driver’s seat

Estrella’s school, the Jefferson County Open School in Lakewood, CO, practices student-centered education. This philosophy can look different from program to program, but it boils down to one essential element: Students have a say in what and how they learn.

The concept is known under a few different names, such as inquiry-based learning, or giving students voice and choice. Some schools offer school-wide programs, such as senior capstone projects, where seniors work on a year-long project of their own design. At other schools, individual teachers design courses in a way that gives students more control over what and how they learn.

MacKenzie has published several books on the inquiry method, wherein students and teachers work together to map out the direction of each student’s learning. Students explore their interests and curiosities, he says, while the educator’s job is to tie in the grade-based learning goals and help students develop skills like critical thinking and collaboration.

Why student voice and choice is so important in high school

Teenagers are developmentally at a stage when their brains crave relevance and meaning, but many high schools present learning that is highly routinized and disconnected from students’ interests or even the value of learning. Students take courses, read books, write papers, and do math that they largely do not choose in exchange for abstract points that are calculated as grades, which then become gatekeepers for future opportunities, like college.

Throughout his career as an educator, MacKenzie has seen countless students who have become disengaged from traditional high school or have learned to “play the game” of education to earn high grades without really doing any deep learning. Under a student-centered model, the focus is on learning skills rather than a collection of facts or knowledge, he says. The result? As students grow their mastery and learn about things they care about, they feel more connected to their education.

In a study of 12 New England high schools using these practices, educators reported that students were more engaged and saw their learning as relevant to their lives. “We want students to be able to find meaning in their learning — and not just engagement, but fulfillment,” MacKenzie says.

This student-centered approach has also been linked to better academic outcomes. A 2014 study of four student-centered high schools in California found that students performed better on state assessments than peers in other district schools, and graduation rates beat state and district averages.

It also may be a way to engage students from historically disadvantaged communities whose life experience may have made them feel particularly powerless. Researcher Anindya Kundu says giving students a voice in their education is essential to fostering agency, the idea that each person has a certain level of ability to actively influence their surroundings and situation. According to Kundu, how much agency we have is affected by the circumstances we’re born into. In general, children with fewer opportunities to learn and grow early in life can grow up without the necessary skills and support to face obstacles and pursue positive life changes, making them feel powerless to change their circumstances.

In his book, The Power of Student Agency, Kundu argues that educators can help students build that capacity. In his research, Kundu interviewed young adults who overcame disadvantages to find success, and found they were significantly influenced by having autonomy in their learning and receiving individual mentorship and support.

To cultivate student agency, educators should make sure each learner is challenged by their work and can pursue topics they’re interested in, Kundu says. It’s also critical that schools focus on students’ individual strengths and potential, and understand the unique challenges they face.

“That’s the part that requires a relationship-based model — really knowing who your students are and what gets them up in the morning and kind of thinking about, what are their future goals?” Kundu says. “And how can I make them realize that what they’re learning is relevant on the path to achieving those goals?”

Each project is co-designed by the student and their advisor, leaving plenty of room for interpretation. In the creative expression passage, past students have recorded albums, pursued competitive rock-climbing, or led outdoor learning labs for younger kids, says Principal Scott Bain.

The projects can also be deeply personal. One student began attending therapy and Al-Anon meetings during their adventure passage — centered around a “personal quest” — after focusing the project on their relationship with an alcoholic family member.

“It always comes back to… a more internal process for the students… exploring who they are, who they want to be, before they make this transition from adolescence into adulthood,” Bain says.

The educator’s role is to guide and support the student through their journey and draw connections to learning goals. Estrella says her advisor, Jen Wisniewski, was her sounding board and helped her set realistic expectations. “It’s self-driven, but you’re not doing it alone,” Wisniewski says.

Giving all students voice and choice

To create a student-centered approach that serves all learners, the curriculum must be culturally relevant to students, Kundu says, insofar as the students should be able to choose topics that feel relevant to their lives. Choosing between a paper on Hamlet and MacBeth or between two teacher-constructed questions about the civil war is not choice.

Kundu also stresses that schools must be sensitive to the challenges students and their families face outside of the classroom. That could mean offering informational materials in multiple languages, or holding district meetings when working parents can attend.

“Students don’t exist in a vacuum. The more we can think about the community that they come from and they’re a part of, the better we can cater to student agency,” Kundu says.

At the Open School, educators say the flexibility of the Walkabout program allows students to tailor projects to their background and needs. Wisniewski pointed to one student who is pregnant and has focused her adventure passage on having a healthy pregnancy.

“I think it’s a model that could really work for kids who are most at-risk, because they can see themselves in their education,” Wisniewski says. “And they’re being seen, sometimes for the first time, as just a whole person.”

How student-centered learning can go wrong

Still, even proponents of inquiry-based or student-centered learning say the approach has limitations and potential pitfalls.

How to recognize it when you see it