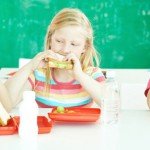 Can kids eat their way to better grades?

Pop quiz: If you take a classroom of hungry kids and mainline Ding Dongs into their veins, then give them a math test, what’s going to happen? How about first offering them a Skittles free-for-all? A Pop-Tarts pig-out? Or a french fry feeding frenzy?

Ask any parent to offer anecdotes about how food affects kids’ brains, and the floodgates open. To wit: At my daughter’s recent birthday party, the 6-year-old girls decorated masks with the focus of Renaissance masters until we served the chocolate cake. Within minutes the scene had regressed 1,700 odd years to a bacchanalia of half-naked, sugar-smeared revelers, intent on raising Hades from the underworld with their screams.

Parents in attendance marveled at the “classic sugar rush.”

But what was really happening in those little brains? And what does science tell us about food’s relationship to cognition?

A famine of facts

As a firm, some might say fanatical, believer in the power of food to influence kids’ thinking — and specifically their academic performance — I was eager to dive into the sea of literature on this topic.

Prepared for some serious Internet surfing, I soon found myself wading in a veritable puddle of research. Compared to thousands of other arenas on, say, television’s impact on the brain or the influence of classroom size on learning, less seems to be known about how food affects children’s mental functioning.

“I was surprised too,” says Kerri Tobin, a third-year graduate student in education at Vanderbilt University who is researching the potential link between fast food and academic performance. “There’ve been plenty of studies on the effects of malnutrition, mineral deficiencies, and the importance of breakfast but not that much on foods.”

Sugar, fat, and additives — oh my!

Some of the findings, she says, challenge conventional wisdom. For instance, researchers have found that sugars — be they natural or artificial — don’t cause hyperactivity. Another study found that children, like adults, performed better on mental cognition and memory tests when amped up on caffeine. “Though I don’t think anyone’s suggesting that we give caffeine to children,” Tobin hastens to add.

There have been fewer studies focusing on how certain foods affect cognition, though there is a growing body of research on how diets affect Alzheimer’s patients. Tobin cites one study in which rats fed a diet high in saturated fats had slower cognitive functioning than those on a normal diet. Another study, published in 2005 by the American Society for Nutrition, found that higher intakes of PUFAs (polyunsaturated fatty acids found in fish and vegetable oils) may contribute to improved academic performance while increased ingestion of cholesterol was linked to poorer performance.

In the past 30 years, several studies have attempted to understand the effects of additives in our foods. According to one meta study published in 2004, many reports have documented that colorings, preservatives, and other additives carry adverse behavioral effects.

In 2004 a U.K. study found that additives may increase hyperactivity. After putting a group of 3-year-olds on an additive-free diet for a week, researchers gave some of the children an additive-laced drink and others an additive-free but otherwise identical beverage. Parents of the children drinking the additives reported an increase in disruptive behavior (they didn’t know which drink their children had been given). Another report published in 2007 in the British medical journal The Lancet found significant adverse behavioral responses in both 3-year-olds and 8- and 9-year-olds when they consumed drinks with a mixture of sodium benzoate and artificial coloring. Yet another study published in 2007 in the European Journal of Clinical Nutrition found that a junk food diet at age 4 ½ was associated with a higher incidence of behavioral problems at age 7 — but the researchers noted that it was unclear whether this reflected a nutritional issue or a difference in parenting styles.

Burgers with a side of bad test scores?

Tobin’s own research — unpublished but presented at the 2009 conference of the American Educational Research Association — looked at the food consumption surveys of 5,500 fifth-graders from a national longitudinal survey by the Department of Education. Tobin found that children who ate fast food three or more times per week performed lower on standardized tests in reading and math.

Think such findings say more about kids’ socioeconomic background than the actual affects of fast food? Not necessarily. Tobin says she controlled for the following variables: the parents’ income, age, education, occupational status, and number of hours employed; whether or not they attend parent-teacher conferences; whether the family has food security issues; and how many hours the child spends in before- or aftercare. She also controlled for the children’s race, gender, and age; the number of books they own; their interest in the subject matter tested; other food behaviors; obesity; school attendance; and their geographical region and urbanicity.

According to Tobin, none of these factors changed the link between a fast-food diet and low academic performance.

So does this mean fast food makes you stupid?

The devil’s in the details

Tobin is cautious about jumping to any conclusions: “Having controlled for so many things, I don’t think it’s unreasonable to imagine that there could potentially be a biological effect.” But, she adds, there could be other explanations. “Maybe kids who don’t perform well academically are the type of kids who like to pretend they get to go to fast-food restaurants all the time. Or maybe the kind of parent that goes to fast-food restaurants is the same kind of parent who doesn’t have time to help with homework.”

In any case, Tobin’s research underscores some of the difficulties in researching the relationship between food and academic performance. Self-reported food-consumption surveys (from both children and adults) are notoriously inaccurate. Moreover, most food isn’t a single ingredient you can test in isolation.

To make matters worse, testing the effects of certain ingredients requires that families adhere to special diets, which typically limits the duration of the tests and therefore their scope. Finally, because we don’t eat ingredients in isolation, understanding the complexity of how chemical compounds interact in our bodies is usually beyond the scope of nutritional research. As Tobin noted, if there is something about fast food that has a deleterious effect on kids’ thinking, it won’t be easy to isolate: “Is it saturated fat? Is it a certain preservative? Is it the ammonia they use to clean hamburger meat? We don’t know.”