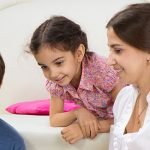 Support your children’s English language learning by focusing on their literacy in their native language.

There are many wonderful cognitive benefits to raising your child to speak more than one language. Bilingual children do better in subjects like reading and science, and they score higher on standardized tests and exhibit better problem-solving abilities. There’s also evidence that learning multiple languages improves creativity, and that the bilingual brain is better at filtering out distractions.

The earlier a child is exposed to a second language, the greater likelihood he or she will gain proficiency. (And after that, learning subsequent languages is easier than learning the first foreign language.)

So what is the best way for parents who don’t speak English to support their child’s development of a second language? Focus on increasing your child’s literacy in your native language.

Parents who are not comfortable with English may worry about how their children will do in school without their help in English, says Francisco Palermo, assistant professor of human development and family science in the College of Human Environmental Sciences. There is evidence, he says, that learning early reading and math skills in Spanish supports learning those skills in English.

So read to your child, and talk about the stories you’ve read. Play rhyming word games, sing songs, and expose them to the written word in Spanish. By exposing your child to your native language, you’ll build a strong foundation for their literacy skills.