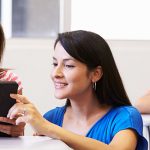 What parents should know about equitable grading in high school

How some educators are changing how they grade and helping learning in the process.

At the end of the semester, the students in Sarah Zerwin’s high school English classes make a case for the grade they believe they deserve.

For months, they’ve taken quizzes, discussed their reading in class, and submitted essays. None of that, however, has been converted into points and added up. Instead, if students believe their grade should be an “A,” they outline their learning goals, the steps they took to reach them, and the progress they made, such as revising an essay and turning it in by the deadline. Zerwin then makes the call: Does she agree with the student’s self-assessment?

Zerwin’s approach reflects a shift in how grades are doled out in school, and a growing concern that the traditional, points-based grading system is inequitable. Though it may seem simple and fair in theory, a points-based system is open to bias, such as when a teacher allocates points for effort and participation in class. It tends to reward students who come from more affluent backgrounds and have the means and support to complete daily assignments and extra credit projects.

Critics also argue that traditional grading undermines the very point of education: learning. And instead of encouraging students to learn new material and skills, students are more focused on accruing points and gaming the system, says Zerwin, the author of Point-Less: An English Teacher’s Guide to More Meaningful Grading and a teacher in Boulder, CO. Today’s online school portals, which keep a real-time tally on student scores, simply add to the pressure.

Research has found that grades can take away from learning, motivating students to cheat, cut corners, or find the easiest way to complete an assignment. It also makes them fear failure — even though failing is part of learning.

“It makes everything high stakes,” Zerwin says. “It makes them feel like they can’t take risks because there’s maybe this penalty of losing points, and then their grade would go down. When you remove all of that from the equation, it changes everything for the kids.”

A more equitable approach to grading includes common practices such as…

Removing the 0 to 100 point scale: Instead of averaging or adding up a student’s performance over the course of the semester, teachers weigh more recent performance and growth. Even if it took more than one try, did the student learn the material? This encourages students to keep working at it and improving, rather than penalizing them for their initial struggles. It helps students who may not have had the same kind of support, resources, and head start as students with tutors and extracurricular enrichment programs.

Allowing students to try again: Students can retake a test or revise a project to show that they are making an effort to learn the material. This also encourages students to keep trying, even if they failed or performed poorly the first time.

Offering more opportunities for reflection and feedback: Teachers often ask students to keep a journal and reflect on their progress. Teachers also provide more feedback (rather than points) on their assignments, as well as ask students to give each other feedback.

Using this approach, Joe Feldman, author of Grading for Equity and a former teacher and administrator, commissioned a study with 350 teachers at more than 15 suburban and urban middle school and high school classrooms in California, the District of Columbia, Maryland, and Massachusetts. The result: The percentage of students given a “D” or an “F” decreased. The percentage of students awarded an “A” decreased, too, particularly among white and affluent students, suggesting that there was less grade inflation. It also found that student grades were more closely correlated with their performance on standardized tests, suggesting that their grades better reflected their knowledge of the material.

In Zerwin’s classroom, she asks students at the beginning of the semester to select three learning goals, such as being able to read a book and come up with their own interpretations. She then works with each student to customize what they can do to reach those goals, and asks them to keep track of their progress in a journal. Students often come into her classroom expecting an easy “A,” but then realize that to show progress and growth, they have to put in more effort.

“People think it’s a free-for-all but it’s not,” Zerwin says. “They still need to do the work.”

But adopting such a dramatically different approach to grading can be challenging:

We’re conditioned to using points to determine grades. Teachers will need to let go of using points to ensure students cooperate in class, complete their homework, and follow rules. That means they’ll have to rethink how they set and enforce deadlines, class requirements, and learning goals. Likewise, students will need to adjust, and be redirected from tracking their grades moment by moment.

What happens when a student requests an “A” but really deserves a “B” or a “C?”

Zerwin chronicles how she ran into this problem early on, when a student requested an “A,” but she knew that the student hadn’t done the work to deserve it. “The ironic thing is, I knew that my old points-based grading system would have saved me,” she wrote. Since then, she’s learned to gather better data, communicate with students on a regular basis, and clearly outline the goals and standards so students are well aware of the progress they’re making. Students shouldn’t be surprised by their grade at the end of class, Zerwin says.

While such an approach should remove some biases, it is certainly not bias-free.

Zerwin and teachers who have adopted a no-points system are upfront with their students and parents, and they say they have received minimal resistance. Parents should look for the teacher’s written feedback in progress reports, rather than simply the grade in the online school portal. Zerwin suggests they ask, “Is my child keeping up with the work? What is my child learning? What does my child need to work on?”

“It’s really hard to completely step out of the great grade game as we know it,” Zerwin says. “But when students realize that they can turn in something that’s not perfect, and it’s going to be okay, then all of a sudden, they’re just focused on doing the work. It’s kind of amazing.”

If you want to encourage your child’s teachers to approach grading more equitably, reach out to them at the beginning of the school year and ask how growth and improvement are factored into a student’s evaluation. Can students retake tests or redo work? What kind of feedback will students receive? Parents can show teachers that they share the same goal: for their children to learn.

Zerwin’s Point-Less: An English Teacher’s Guide to More Meaningful Grading offers real-world examples of how she and other teachers have used equitable grading practices in their classrooms, such as how they gather the data they need — instead of points — to determine grades for their students. To make it work, teachers need to set clear and measurable goals so that students (and parents) aren’t surprised by their grade at the end of the class.

Edelman’s Grading for Equity shows how administrators from around the country have led their schools to try more equitable grading practices and the benefits he’s seen for both students and teachers. From fewer students receiving “D” and “F” grades to standardized test scores that better reflect student grades, these schools have improved by adopting a new approach to grades.