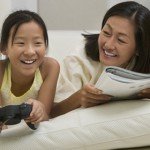 In defense of video games

Chances are your child is already engaged with games like Mario Cart or Tomb Raider -- if not in your living room then at a friend's house. Learn how to make video games work for you.

In his February 2009 address to a joint session of Congress, President Barack Obama advised parents to help their kids in school and “put away the video games.” But despite what the president says, gaming doesn’t have to interfere with learning. In fact, some video games teach valuable skills, helping kids form hypotheses and make decisions wisely and quickly. The key to avoiding overstimulation and computer addiction is finding age-appropriate, educational video games and setting limits on the amount of time spent playing them.

Just as you might replace white bread with a whole-wheat variety, you can help your child by choosing a “healthier” video game with instructional value. Interactive games are natural teachers. They immerse kids in collaborative environments, allowing for rapid decision-making and instant feedback. “If a game lacks the sensation of play, then it isn’t achieving its true potential,” writes Gail Matthews-DeNatale, associate director of academic technology at Simmons College in Boston, in her 2008 study, “Learning From Video Games: Designing Digital Curriculums.” “Play is observable throughout the animal kingdom; it is the fundamental way we learn.” Studies of the brain have proven that repeated exposure to video games reinforces the ability to create mental maps, formulate hypotheses and focus on several things at once.

Playing an educational game should be an exercise in “constructing the proper hierarchy of tasks and moving through the tasks in the correct sequence,” writes Steven Johnson in his 2005 book, Everything Bad Is Good for You. “It’s about finding order and meaning in the world, and making decisions that help create that order.”

With the help of Common Sense Media, we’ve compiled a short list of age-appropriate video games that will help your child develop these important skills.

Has your preschooler discovered your computer? Perhaps pressing sticky fingers on your keyboard to see what happens? With the Fisher-Price Fun-2-Learn Computer Cool School, you can encourage young kids to play on your computer with no risk to your personal or business files. This game comes with a brightly colored, kid-friendly QWERTY keyboard; an attached writing and drawing tablet; and a stylus pen. Housed on the keyboard are five buttons to launch the five learning centers featured in the Leo’s Classroom software. For ages 3 and up. Read the complete review at Common Sense Media.

In Mia’s Reading Adventure: The Bugaboo Bugs, kids go on a learning adventure with an adorable little mouse. Mia’s house has been invaded by the Bugaboo Bugs, careless insects that leave messes. Fearing that the humans sharing the house with her family will notice the pests and call an exterminator, Mia decides to do something to convince the bugs to move on. As kids play with Mia, they’ll encounter 12 educational games that reinforce reading and writing skills taught in kindergarten through third grade. For ages 5 and up. Read the complete review at Common Sense Media.

In Drawn to Life on the Nintendo DS, your child illustrates the hero for a world she helps create. The game revolves around saving a village of creatures called Raposas from the evil doings of a character named Wilfre. He has torn pages from the Raposas’ Book of Life — the source of all things that exist in their world — and scattered them across the land, causing things like the moon, sun and stars to disappear. Watch your child save the Raposas! For ages 7 and up. Read the complete review at Common Sense Media.

Crayon Physics Deluxe is a puzzle game set in a familiar, childlike environment of crumpled paper and crayon drawings. And yet, this seemingly juvenile setting contains a powerful physics engine that turns your scribblings into objects that have weight and mass. The game consists of 76 puzzles which all share the same goal: get the little red ball to roll over to the yellow star. The cursor is a crayon, and you can draw anything he imagines to solve the puzzle. For ages 8 and up. Read the complete review at Common Sense Media.

SimCity 4 carries on the tradition of the SimCity series by allowing your child to be the all-powerful mayor of his own city. He’ll zone land for residential and business developments; plan roads, the water system and the energy grid; trade with nearby cities; establish schools, hospitals and emergency services; and create parks and gardens. Graphs, charts and maps will aid his decisions, as will listening to residents called the Sims, a new element to the game. He can name individual Sims, decide where they will live, and then observe how his city-level decisions affect them. For ages 8 and up. Read the complete review at Common Sense Media.

An unabashed tribute to Super Mario Brothers, Braid is a side-scrolling adventure loaded with nods to Nintendo’s iconic plumber, including dangerous plants that pop out of pipes, cannons that spit out monsters, and clouds upon which the blue-suited hero can hitch rides. But Braid is much more than simple homage. Each of the game’s six worlds features a different time-shifting mechanism that is used to decipher a series of mind-bending puzzles. Depending on the level and circumstance, time might slow down, enemies might move forward or backward, or the clock might stop altogether. Players can rewind the clock at any time and in any level. For ages 12 and up. Read the complete review at Common Sense Media.

Video games have a rating system, just like movies and TV shows. While some games encourage creativity and learning, others may be too violent or mature for your child. The Entertainment Software Rating Board (ESRB) is a nonprofit organization that rates every video game, so remember to do research before you buy anything.