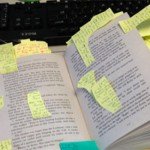 Give intellectual graffiti a try

Skills and tricks practiced in a successful classroom might be worth putting in the parenting repertoire at home.

My 13-year-old daughter accompanied me to the office this week, hunkered down in an empty cube and curled over her book. It wasn’t long before she’d begun piquing the interest of my coworkers: what the heck was she doing?

Annotated with copious and meticulous notes on hundreds of stickies poking out in all directions, her book Chains by Laurie Halse Anderson looked like the artifact of a fanatical scholar. The method behind this madness? The practice is called IG – short for intellectual graffiti – a trademarked term created by her brilliant language arts teacher who has managed to make the kind of close, college reading that only OCD graduate students can appreciate seem cool to middle schoolers.

“IG,” she told parents, “is the graffiti they are allowed to do. I want them to feel like it’s cool to think.” If my daughter’s once monosyllabic response to reading compared to her current profligate commentary is any indication, the teacher’s word ploy worked. Talk about the power of rebranding!

Teachers: an untapped resource for parents

I’ve learned a lot from teachers over the years. How to read, how to factor a polynomial, how to dissect the darker implications of Moll Flanders and use primary sources. One thing I never expected to learn from teachers is how to be a better parent. Now, with two kids in schools with teachers who regularly exceed my expectations, I’m often struck by how good teachers know things many parents (especially this one) simply don’t know about how to motivate children.

Now with yet another study suggesting that teacher morale is in decline, it’s worth thinking about how precious their skills are and how untapped they remain. According to the 29th MetLife Survey of the American Teacher, teachers’ level of satisfaction has dropped 23 percentage points since 2008 and more than half of the nation’s public school teachers report feeling high levels of stress several days a week (an increase of 15 percent since 1985).

Earlier this week my 9-year-old was up and dressed in her dungarees, inhaling a bowl of Cheerios and announcing that she needed to get to school now. What’s the hurry? I argued. School doesn’t start for another hour and a half. “But if I get to school early, Mr. Chew will let me clean the classroom.” This from the child for whom it takes relentless badgering to induce her to clear her plate after dinner. But Mr. Chew in his wisdom has created a system that lets students earn points toward an award for the whole classroom, such as a visit to a nearby park or library. The system has caught on like an oil fire in a shack. When I arrived with my daughter four other girls were already happily toiling away — and had been since the crack of dawn apparently — in pursuit of the teacher’s beguiling points.

The aforementioned language arts teacher has even managed to rebrand homework, linking it to a cool internet acronym: SWIK, or “shows what I know.” “It’s giving them a chance to show what they know, it’s not an empty exercise,” she told a group of parents at Back to School Night. Students now correct her if she ever uses the dreaded H-word.

Indeed great teachers know things about motivating kids that many parents could use. (A lot of the moments of magical parenting I’ve witnessed have turned out to involve parents who also happen to be teachers.) They know about group incentives, individual inspiration, the power of word choice, the importance of consistency, the optimism created by a symbol scribbled in the margins, and the value of repetition.

Many of these magic tools have helped my husband and me become better parents — quite unbeknownst to the teachers who have influenced our lives. So if there are any teachers out there reading this — take heart. Yeah, your job is hard, and sometimes you’re probably not even sure how much your kids are learning. But don’t forget about the reverberations of your lessons on all the families you have touched over the years.

Our research suggests it’s teachers that parents trust most when it comes to taking advice about their kids. Yes, every parent knows their child best, but sometimes we need the tricks of a professional to help us rebrand that pile of dirty dishes without raising our voice.