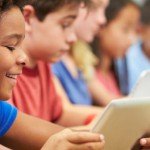 Advertisement
Parenting » Education trends » iPads in the classroom: the promise and the problems

iPads in the classroom: the promise and the problems

A close look at tablets in schools — what works and what doesn’t.

I am standing in front of a class at Drayton Hall Elementary in Charleston, SC. Fortunately, this isn’t one of my nightmares where I find myself delivering a tedious talk to an ornery audience of spitball-wielding preteens. This is real, and these kids are too busy to care if I’m boring. Also, I’m standing next to their teacher, Amy Winstead, who has no intention of delivering a lecture.

The fifth graders have read Bud, Not Buddy by Christopher Paul Curtis about civil rights during the Great Depression. Now they are busy designing a movie trailer to demonstrate what they’ve learned. With a rubric, a print copy of the book, and an iPad in front of them, they draw, research, write, summarize, photograph, and cue music on the iPads. There isn’t a bored look or paper airplane in the room. One boy holds up his iPad to demonstrate a slick transition he created for his credits. Another snaps a photo of the book for an art montage, while a third finds a quote to illustrate a concept. Occasionally a student asks Winstead for advice, but most seem to have something to say and know exactly how to say it.

A tablet in every classroom?

Across the country, school districts are purchasing tablets in hopes of creating interactive learning evironments like the one in Winstead’s classroom. As of early 2013, half of the nation’s school districts were using some sort of tablet or eReader (this figure includes a vast range, from a few tablets at a single high school in a district to entire districts where most students have a tablet). Apple reports there are seven million iPads in U.S. schools, and more than 10 million iPads in schools around the world.

Early research shows that tablets in the classroom have the potential to significantly enhance learning. UK-based researchers examined schools using tablets and found a range of learning benefits, including increases in student motivation, collaboration between students and teachers, and collaboration among students themselves. Another report found that using iPads helps high school students grasp complicated scientific concepts, like time and space. (A National Geographic article explains the study’s findings nicely.)

But getting technology into students’ hands is only step one. Transforming learning requires far more than buying tablets and doling them out. According to tech experts, many educators don’t understand the potential — or the challenge — technology offers. “Schools are making the same mistake with mobile devices that they made with desktops and laptops,” says Elliot Soloway, a founder of hi-ce, the Center for Highly Interactive Classrooms, Curricula & Computing in Education, and a professor at the University of Michigan. “Technology has benefited retail, entertainment, research, and other industries because those areas redesigned themselves to take advantage of the technology,” says Soloway, but, “bolting technology onto an existing curriculum will not lead to increased student achievement.”

Indeed, integrating new technologies isn’t easy. Consider two non-education related examples: Amazon and Blockbuster. Amazon built itself from the ground up in response to technical innovation and — because it was willing to let go of the old retail model — transformed the way people shop. Blockbuster attempted, too late and without much commitment, to staple some technology onto its old business model. Today, of course, that company no longer exists.

Adapting to change this enormous does not come with a road map. Simply giving students tablets won’t change much. But using tablets and the Internet to transform the classroom into a place where students ask questions, seek answers, do research, and test hypotheses can not only make learning more fun for students, but can also give teachers a way to see exactly how well each child is learning and customize each lesson. With worksheets and a blackboard, a differentiated classroom is difficult to accomplish. But it’s easier to do with a tablet — and a teacher who understands how to use it.

Heading off without a road map doesn’t always end well. Last year, Los Angeles Unified School District (LAUSD) launched a one billion dollar program that would put iPads into the hands of 600,000 students. Not surprisingly with a project this gargantuan, mistakes were made. Some teachers complained that they could not access the Internet in the classroom via the devices. Teachers didn’t receive adaquate training. Some students bypassed security measures and surfed prohibited websites. In the wake of the controversy, union representatives accused LAUSD of pandering to corporations by taking handouts in the form of free iPads for staff. Parents and teachers are protesting the effort, saying the money would be better spent on repairing schools. Many are calling for a halt to the program.

In LAUSD’s defense, their goal was monumentally ambitious. Even the most sophisticated tech company would likely run into problems if it attempted to distribute that much gear to 600,000 teenagers. Critics charge that a change this enormous should have been rolled out slowly to small pilot groups with curricula rebuilt by experts from the ground up and teachers supported by massive amounts of training. Others have suggested that iPads weren’t the best choice — or the cheapest. But, as LAUSD argued in its official statement, the biggest mistake was not that the project was rushed, but that it has taken so long: “We are 13 years into the 21st century. Access to technology is not a luxury; it’s a basic necessity… Because many students do not have access to technology at home, schools have a responsibility to help them get access to the knowledge and tools they need to be on the same footing as those students who do.”

The effort was a worthy one — although it’s easy to lose sight of, given the many implementation blunders. Letting students access the Internet can transform a classroom, especially if teachers can fully harness the potential of the tools available. But because LA parents and teachers did not get the necessary support or communication, the effort has created heated opposition — and a national backlash against the idea of tech in schools. Tech advocates worry that LAUSD’s implementation debacle is overshadowing what’s really at stake, while skeptics argue that tablets in the classroom may be an unworkable idea — not to mention a poor use of scarce education resources.

So let’s leave the clamor in LA and visit some classrooms where tablets are making a positive difference. In these classrooms, learning has been calmly transformed from a place that served some students — leaving others bored or falling behind — into one that engages every student at the level where they are able to learn, when they are ready to learn.

Down the hall from Amy Winstead’s classroom at Drayton Hall Elementary, kindergarten teacher Kristi Meeuwse has been using iPads in her class since she became a test pilot for the district’s iPad initiative three years ago. Her students use them to read (each student’s iPad is loaded with a personalized selection of books), play games that reinforce the curriculum, and create projects that demonstrate what they learned. The iPads allow Meeuwse to personalize instruction for every child. If a student is struggling, she can let the iPad offer repetition (through games, targeted reading, or apps) and if another needs to move faster, she directs him to a faster-paced game or app.

Countering the popular parent complaint about in-school tablet programs — “Too much screen time!” — Meeuwse points out that most parents equate screen time with passively watching TV. For her students, these tablets are interactive learning tools and customized books, she says. And her kids don’t use the iPads any more than they use blocks, paper, crayons, or any other powerful learning tool in her classroom.

But is she getting results? When asked for some measurable example of  success, Meeuwse says that although she’d been teaching for 22 years when she adopted the iPad program, it inaugurated an immediate change. “That first year was the first time in all the years I’ve been teaching that 100 percent of my students went to first grade reading above grade level.” The teacher didn’t change. Nor did her basic methodology. She just had better tools.

Randy Joss, a high school math teacher at Menlo School, a private 6-12 school in Atherton, CA, has also found success in tablet-based teaching. “I come out of a technology background,” Joss explains. “In that world, we like to start with the problem, then come up with a solution to solve it — not the other way around. Technology for its own sake isn’t that helpful. But it can be a brilliant solution to a problem.”

The problem he wanted to solve was that moment when students, thinking they understood math in class, got home and got stuck. “They would stop, frustrated,” he explains, “and give up. And that meant we spent a lot of class time the next day going over the homework.” It occurred to him that if he could be available, for each student, at the exact moment when his students got stuck, everything would go more smoothly. So he posted videos of himself solving the problems he used in class online so students could access them when they had questions. Every kid in his school has an iPad, so they could watch the videos from anywhere at any time.

“Kids started accessing them from home, from campus, and anywhere they were working on the homework,” says Joss. “Soon all the students started showing up for class with the homework done, ready to move on.” Everyone improved, got higher test scores, and moved through the material at a faster pace.

Asked how they would react if their teacher made them shut off the Internet to learn, Amy Winstead’s fifth graders expressed dismay. “I’d leave,” a boy named Nick announced. “Right out the door!” He pointed to the door for emphasis.

Another boy, Ahmad, showed off an app that turns learning fractions into a game. “I love this,” he explains. “I play it whenever I can.” Next, he talked about BrainPop — a cartoon based app that teaches everything from math and science to history and grammar. For this student, learning is clearly play.

Winstead’s primary worry about the iPad program is that it won’t continue in middle school. “I am concerned about how these kids will transition to a school that doesn’t have a one-to-one technology program,” she says. The middle school in their district has not yet found the funds to implement such a program. “I know a lot of parents are looking for a middle school that does have a tablet program.”

Back in LA, the protests continue. The backlash against tech in schools worries me — as a parent and a citizen — because so many people are very loudly missing the point. Of course technology won’t solve all our education woes. Some high-achieving education countries, like Singapore, for example, are investing in education tech, but others, including Finland, don’t use a lot of high tech in their classrooms, and their students are clearly thriving. Still, technology is an essential tool in our modern world and we need to make sure our teachers and students know how to use it. Try to imagine how any major U.S. company or workplace — your own workplace, for example — would function if it relied on paper, a blackboard, and a few aging computers shared by 30 people. In the last 20 years, we have built a massive body of knowledge and incredible tools to allow anyone to access it from anywhere at any time. It has transformed every industry from bookstores to banking. Shouldn’t we harness it to raise the smartest, most inquisitive, creative, and educated population in history?