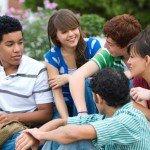 Parents and educators have only to scan the headlines to realize the urgent need to stop bullying. In Kansas, they're trying the miraculous program that's transforming Finnish schools.

Bullies in Lawrence, KS are about to get Finn-ished.

That’s right, bullies lurking in school hallways and playgrounds in this prairie state town will soon have to face a fearsome opponent. The state is instituting a winning anti-bullying policy from Europe’s #1 nation in public education, Finland.

KiVa — a “holistic” anti-bullying program that enlists support from the entire school community — is flurrying in the Nordic nation of Finland like a benevolent blizzard, freezing harassment in its tracks. An analysis in the January/February 2011 issue of the journal Child Development reports that KiVa instigated a 46 percent reduction in “victimization” and 61 percent reduction in “bullying others” in only nine months — results that many bully-infested American schools should envy.

Researchers at the University of Kansas will attempt to duplicate Finland’s success. Todd Little, a quantitative psychologist, Anne Williford, a professor of social welfare, and Patricia Hawley, a developmental psychologist, are seeking funding for an initial pilot study of KiVa, to be implemented in local schools.

According to Williford, the number of schools and classrooms involved will depend on the size of the grant they receive. If all goes according to plan, the researchers hope to launch the KiVa pilot at the beginning of the 2012 school year.

Officials at the Lawrence school district are excited about the project. “We do have a bullying-prevention framework in all our schools already,” Chief Academic Officer Kim Bodensteiner says. “But I understand KiVa is very successful in Finland and we’re very happy to partner on it.”

Why does KiVa work so spectacularly? The answer is strikingly biological. KiVa seeks to create an environment that’s excruciatingly inhospitable to the parasitical behavior of bullies. Working together, students, teachers, administrators, and parents transform the school’s “peer ecology” into a culture where bullies are awarded no friendship or status for their abusive actions. Instead, their behavior is allocated only the condemnation it deserves. In essence, KiVa — an acronym of “KiVasaamist Vastaan,” the Finnish words for “against bullying” — is an activist campaign of compassion that helps bystanders and victims put bullying into deep-freeze.

When it comes to bullying, the Nordic countries seem to be ahead of the rest of us. The Olweus Bullying Prevention Program, which, like KiVa, takes a “whole school” approach, was developed 40 years ago in Norway by Dan Olweus and was exported to the U.S. in the 1990s in cooperation with Clemson University. The Olweus program was originally (and successfully) piloted in 18 middle schools in South Carolina and 12 elementary schools in Philadelphia. Since then, it’s been implemented in almost every state in the country.

Olweus shares some KiVa methods, but according to the University of Kansas researchers, the Finnish program is more comprehensive. They say KiVa’s multi-layered approach makes it so effective. KiVa includes activities, learning media, and targeted strategies to enhance empathy and empower students to help bullying victims. “Although other programs share some of these features, none have assembled them into a coordinated whole-school, multi-layered intervention central to KiVa,” Williford says.

KiVa provides anti-bullying instructions via computer games — how better to reach today’s youth? — as well as group work and theater exercises. Once students have developed a basic foundation of knowledge and skills, they’re encouraged to intervene in real-life situations.

Teachers receive anti-bullying instruction, and in turn educate parents. The bullies themselves are required to critique their behavior in a group that includes the victim, bystanders who witnessed the abuse, the classroom teacher, and designated teachers and staff.

Lawrence, KS, and the entire U.S. will be blessed if KiVa is sown here and reaps Finnish results. First piloted in 2007, 80 percent of Finnish schools now use the program. It won first prize in the 2009 European Crime Prevention contest. The Netherlands has also imported KiVa’s program.

Parents and educators have only to scan the headlines to realize the urgent need for an effective approach to bullying. A Tonganoxie, KS teenager was awarded $440,000 in a 2005 settlement after suffering homophobic slurs for years. Across the state line in Kansas City, MO, a 12-year-old boy killed himself in 2007 after enduring incessant taunting at his elementary school. A recent poll taken by the Kansas Bullying Prevention Program indicates that 35.1 percent of Kansan students in grades 3 to 12 are “regularly victimized by students who bully.” In reply to the survey question, “How often do other students try to put a stop to it when a student is being bullied?” the answer from middle schoolers is a discouraging 12.7 percent of the time.

Finland itself hasn’t been immune. In 2007, a Jokela High School student killed eight people before ending his own life, and the following year a Seinajoki University student killed ten people, and then killed himself. Both were victims of bullying.

Kids who are bullied are at high risk for depression, anxiety, low self-esteem, difficulty in trusting other people, self-destructive behavior, other psychosocial and psychiatric disorders, and, most tragically, suicide. Bullies are also at-risk: Their behavior correlates with future delinquency, alcohol abuse, and antisocial personality disorders. Bullying has also been directly linked to catastrophic school massacres around the country.

Will KiVa work in the U.S., given the differences between Finnish culture and our own? Finland is a homogeneous society, for one thing; Finnish classrooms lack the ethnic, religious, and economic diversity of their American counterparts. The Lawrence pilot project is an “audition” — but if it’s as successful here as it’s been in its homeland, KiVa will likely ripple across the U.S. in the biggest Finnish invasion since Nokia cell phones.