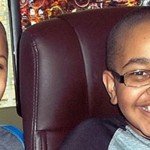 Mastering failure is my superpower

Single mom Pamela Juers says that to help her two boys become strong, resourceful adults, she sees every failure as a chance to learn and grow.

Editor’s note: Following our online parenting chat, Letting Kids Fail and Grow, — part of our Emotional Smarts series — we invited parents to share their stories about kids and failure. We promised to publish the best. We loved Pamela Juers’ moving story about regularly letting her boys learn from their failures.

As a single mother of two, failing is something my boys and I feel we are staring at every day. I am quite sure to outsiders looking in, it may also seem as though something obviously went wrong, some type of failure occurred.

For me, divorcing after 20 years of domestic violence is far from a failure. If anything, the failure would more accurately be allowing myself to suffer that long and allowing my children to be exposed to it at all. Shortly after giving birth to my second son, I found the drive and courage to flee. My oldest at that time was 3 and his brother a newborn. So no, moving into single-mother status wasn’t and isn’t a failure in my eyes.

However, this status creates an environment of learning from our failings quite often. Add to that status the fact that I am disabled due to a spinal cord injury, and additionally that each of my sons have some special needs, facing failure is something that cannot be avoided.

Teaching my sons (11 and 7) to be positive and forward-moving in the event of a failure has been key to their continued success in emotional, psychological, and spiritual health. Since I have not, as of yet, gained the ability to see the future, or travel back in time, mastering the skill of failure is my superpower. I also teach my children that power so as they continue to grow, develop, and face their future, they can perfect a skill and a powerful tool that many often lack.

That might mean allowing my youngest to carry one too many breakable things that he cherishes, and watch them drop and smash into pieces, after not heading my warnings. Or letting my oldest oversleep, even though I know he will miss an event he has waited a month for. But because he did not want to go to bed on time the night before, like so many other times, and set his alarm responsibly, he spent the day in tears having missed it altogether.

In the long run, this experience will help him recognize his failure and remember the feeling it brought about. It will also help prevent a missed job interview at a company he really wants to work for in the future. Now don’t get me wrong. These lessons of failure are painful for Mommy, too. Missing events that have cost deposit money, or allowing toys to break that took two months to buy in the first place because funds are never enough, is a big deal.

There are days I am on the kitchen floor in tears — tired, exhausted emotionally, overwhelmed with how to buy food and make medical co-payments, or gas money versus medications. Those things are draining and challenge me to find a way to remain objective and focused, despite the hardships. But the bottom line is: I also have learned through my failures and know, if I keep at it, the little things improve, making the foundation bigger for the next phase and eventually, I will look up and see an empire built one failing at a time.

Right now, my boys are still building their superpower. But they are learning and succeeding in this, and they put the pieces together faster after each important failure. So I step back and let life teach what I cannot. I do so with a supportive, watchful eye and cheer them on as they learn for themselves. Failure is not the period to the sentence in their life, but rather just a comma. Because a failure should only pause us for a moment, and then we should keep moving forward.

Do you have your own story about your child and failure — whether you couldn’t bear to see them fall on their face or let them learn from their mistakes? Send it to us and we might publish it and promote it in an upcoming newsletter!