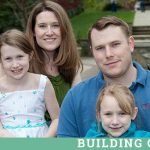 A few weeks before Jessica Allen’s husband, Chaz, was expected to come home from Afghanistan, she received a life-changing phone call from the Army. Chaz had stepped on a 40-pound improvised explosive device (IED).

“According to the battlefield report, they didn’t think he was going to make it,” Jessica recalls. “In the initial phone calls, they were telling me, ‘We found one leg here and another leg over there’ – each phone call was a different story.” Finally, Jessica learned the truth: Chaz lost both of his legs and one of his arms was seriously injured. But things could have been far worse, Jessica says, so she counts herself lucky. A smaller man likely would have been killed in the explosion. “My husband buried 30 of his buddies, and that was almost my reality,” Jessica says. “So I’m just very grateful every day.”

There’s a motto in military communities — “embrace the suck” — which translates roughly to: military life is tough, but you may as well accept it because you don’t have a choice. The expression reflects, in irreverent terms, a philosophy that’s common in families like the Allens: make the best of whatever life throws at you.

This ethos of making lemonade out of lemons may explain a paradox about military children. These are children who experience more than their fair share of risk factors for emotional trauma and academic failure. They move schools often. They experience stressful home lives, often dealing with parents who are absent, injured, or traumatized. And though only a few of these children suffer the ultimate loss — the death of a parent — the fear of this loss and witnessing this experience in their communities indelibly marks their childhoods. Several recent studies have found that the wars in Iraq and Afghanistan, with their multiple, lengthy deployments, have taken a toll on military kids; yet as a group, military kids show impressive outcomes. According to an American Psychologist report, military children “typically function as well as or even better than civilian children on most indices of health, well-being, and academic achievement.” Somehow, military kids develop a quality that education experts today identify as an essential ingredient for life success: resilience.

Defined as adapting positively to experiences of significant adversity or trauma, resilience is — by definition — a response to challenge. Military children no doubt experience more than their fair share of adversity, but what allows them to build their adaptive strengths rather than crumple under the weight of stress?

The Allen family’s experience illustrates how some military families manage to “embrace the suck” — and come out the other side.

Chaz remained conscious after the IED explosion tore away his legs, and even radioed for a helicopter to come and pick him up. From a hospital bed in Germany just 24 hours after the accident, he called home to reassure his daughters, Deryn and Ryann, who were 8 and 5 at the time, that he was going to be okay. Later he was transferred to Walter Reed Medical Center outside of Washington, DC, where he would spend almost two years — first as an inpatient, then receiving outpatient care.

During the first few months after the accident, Jessica spent alternate weeks with Chaz in Washington, leaving Deryn and Ryann with her mother in Tennessee. Then she moved with the girls permanently to Maryland, where the couple made an unusual decision: not to enroll the girls in school. Jessica and Chaz became full-time homeschooling parents.

“Life is so busy when they’re in school,” Jessica says. “It’s out the door in the morning, then dinner, homework, and bed. After what happened, we wanted our girls. We needed to work on healing as a family.”

The Allens’ desire to draw their family close was instinctive. Experts say strong family and community bonds are essential ingredients for building resilience. “[R]esilient families are more likely to spend time together, and to use that time to support and nurture family relationships, regardless of whether it is leisure time or time spent doing tasks,” according to a report by the Military Family Research Institute (MFRI) at Purdue University.

The MFRI report also points out another aspect of the Allens’ parenting that supported their children’s ability to respond to trauma: dealing with their own emotional stress in positive ways. “[P]arents who themselves feel more able to cope with stressors are likely to transmit these behaviors to their children.” In other words, when Jessica focused on the gratitude she felt for having her husband come home alive, she modeled that for her children.

This doesn’t mean that they shielded their children from unpleasant facts of life — in fact, just the opposite. Jessica and Chaz have had conversations most parents never have to broach with their children. When Deryn was in in kindergarten, her friend’s dad died in combat. “We had to talk about the possibility that her dad might not come home, either,” Jessica recalls. After Chaz’s accident, Jessica was honest with the girls about their dad’s injuries and what was going on, focusing on helping them learn from their new reality. She answered all the girls’ questions, from, “Will Daddy walk again?” to “How will he pee?” as calmly and frankly as possible. They even incorporated Chaz’s injuries into the girls’ homeschooling curriculum: “Chaz was like a science project,” she says. “He came home with a horrible infection and had to have a PICC line put in. One of my daughters learned how to take care of it. She learned all about wound care and about prosthetics.”

“These days, we hear a lot about helicopter parents who jump in and bail their kids out at the least sign of stress,” says MFRI Outreach Specialist Christy Flynn, “but this doesn’t help them develop coping skills. Working through challenging experiences helps kids build their self-confidence. Military kids have these experiences all the time: they get used to being the new kid; they are around diverse populations of people; and their parents go away for long stretches of time. They have a range of experiences most kids don’t have access to, and it teaches them a whole set of responsibilities.”

The downside of embracing the suck

Although experts have found that the military culture of determined stoicism builds important self-reliance skills, the “buck up” orientation has its downsides. Real resiliency is best fostered in a context of emotional support, something many military families are afraid to seek. According to MFRI’s Christy Flynn, seeking support from others runs counter to the military ethic of independence and self-sufficiency. “The military has a ‘we’ve got this’ attitude,” Flynn says. “It’s traditionally been hard for military families to show signs of stress or to ask for help.”

Recently this has begun to change, partly because of a growing awareness of the cost of war on military families. Michele Obama’s Joining Forces initiative seeks to support military families with employment, education, and wellness resources and organizations like FOCUS (Families OverComing Under Stress) offer resiliency training for military families.

Jessica acknowledges that asking for help hasn’t been easy for her or for Chaz, but she’s learned whom she can count on. Her mother has provided tremendous support, she says, as have many friends. Out of necessity, she’s learned to cast an even wider net. Their current home is a safety hazard for Chaz — the doorways are too narrow for his wheelchair and the bathrooms aren’t accessible — so they’re building a new home. The house is under construction, but they need additional funds to complete it, so Jessica is trying to raise money through her blog, The War of a Wounded Warrior Wife.

Despite a daily routine that requires far more than the average family has to deal with, the Allens spend a significant amount of time helping others. Along with caring for her husband, helping homeschool Deryn and Ryann (“They tell everyone, ‘Dad is the teacher and Mom is the principal,’” she says), and running her own accounting business, Jessica directs the family caregiver program for the Yellow Ribbon Fund, a DC-based nonprofit that supports wounded veterans and their families. In 2014, she organized caregiver retreats in four cities around the country. Deryn and Ryann, now 12 and 10, help their mother with the Yellow Ribbon retreats; they also do community service with their Girl Scout troops and participate in FUEL, a program that provides food for hungry children. “They’re really grateful children,” Jessica says proudly. “They just go with the flow, and it’s amazing to watch.” Next fall, the girls are opting to go back to school, a decision they made themselves.

Life for the Allens will never go back to their pre-war normal. Chaz requires prosthetic care, pain management, and other ongoing treatments, and likely always will. Jessica is sometimes appalled by the unkindness — or at least insensitivity — of strangers, whose stares and inquiries bother her more than they do her husband. “Some people are just not appropriate,” she says. “They see my husband’s injuries and they feel entitled to ask questions. One lady even asked if it was okay for Chaz to take care of the girls. People see something on TV about PTSD [post-traumatic stress disorder] and they assume they know all about it. The army wants its people to get out and get assimilated, but when you get the stares and the questions, it makes you just want to stay in your room.”

Needless to say, Chaz and Jessica don’t stay in their room – and they make sure their daughters don’t, either. “I think our attitude has helped our girls,” says Jessica. “We let them know that life is going to have some big bumps in it, but you have to just pick up and move on.”

Want to help your child develop resilience? Get insights from a psychologist who has been studying resilience for years.