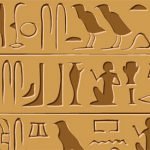 Dive into ancient history and unlock the magic of Egyptian writing for your child.

Between mummies, buried gold, and pictographic codes, no wonder kids love those ancient Egyptians and their wildly dramatic culture. Tap into your child’s weakness for all things Egyptian and give him a fabulous glimpse into the history of language.

Hieroglyphics (pronounced “highrowgliffick”) was a writing system in which words are simple drawings of the thing being described. In this sense, Egyptian writers — called scribes — were artists as well as writers! But that wasn’t all. These pictures could also stand for things connected with themselves; for instance, the picture for “mouth” could have the meaning of “speak,” for “arm,” the meaning of “give.” Some of the pictures could even stand for sounds — like the letters of our alphabet do.

These links to Egyptian art at the Metropolitan Museum of Art show how ancient Egyptians used hieroglyphic writing in their world:

This activity offers kids a way to learn about ancient Egyptian pictograms and thereby understand a little more about how our writing has evolved.

How to do it

As a warm-up, try to communicate the following words through poses or simple actions: “cat,” “walking,” “dog,” or “tree.” Now, using pencils or crayons, make two separate pictures, one from each of the following sentences: “Under a hot sun, a cat went into a house” and “The light of the moon showed the dog the tree.” Can you point out which part of the picture means the sun, a cat, or a house? Or a moon,  dog, or tree?

Next cut out these parts of the pictures (best done with the help of an adult). On a fresh sheet of paper, glue the parts that make up the sentence: “The cat went to the tree in the moonlight.” Have your child show his pictograms to someone not familiar with the activity to guess what this “Egyptian” sentence means!