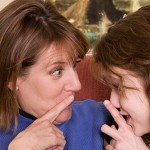 You can’t tell anybody

What should you do when your child says she can only tell you something if you promise to keep it a secret?

My daughter plopped into the car, but was unusually quiet, jarring my mom radar to its caution setting. My family jokes that she was born talking. There are no lulls in conversation that she doesn’t fill with her stories. Something was clearly off.

“Mommy,” she said, “I want to tell you something, but you have to promise not to tell anybody else.” She looked at me with too serious of an expression for a 13-year-old, imploring me to keep a secret.

My heart raced, and I tried to steel myself for her reaction to what I was about to say. “Honey,” I responded gently, “I’m sorry, but I can’t promise that without knowing what it’s about.” She thought for a moment, and then decided to open up. Her friend Beth,* she said, confided that her boyfriend had drugged her and had sex with her using a soda bottle.

The horror and disbelief were momentarily paralyzing. Someone had to be told, but whom?

Secrets are the coin of the realm in teen and tween friendships. Our children may share these with us believing that, by extension, we are bound by their promises. Shattering that faith is heart-rending, complicated, but sometimes necessary. What do you do when your child confides in you and tells you a secret that involves harm or risky behavior? There are no hard and fast rules, but experts agree on the basics.

I consider myself a well-informed mother. I write about education for a living, I read parenting articles, even attend lectures. Yet I couldn’t recall any instructions for dealing with this situation. So I stumbled along asking questions, trying to stay calm. Is Beth hurt? What did she say happened? Has she told her parents? I was trying to determine if Beth was raped or if this was (horribly misguided) sexual experimentation.

Even though I hadn’t promised to keep the secret, I explained why I had to tell someone. If no other adults knew what happened, I said, I have a responsibility to protect Beth and potentially other girls.

You want to be a safe person for your child to talk to, explains Annie Fox, parenting expert, author, and blogger providing online advice to tweens, teens, and parents. Fox suggests taking “a few deep breaths” before saying anything. “The last thing you want is for your kid to be sorry they told you because you completely freaked out.”

Cases of life or death or serious harm are rare. More often kids are worried about a friend’s behavior — she’s hanging out with the wrong people, he brags about being high in class, she wants you to lie about where she’s spending the night.

Whether you view the behavior as normal teen rebellion or a sign of danger may depend on context and a family’s values, says Carolyn Stone, professor of counselor education at the University of North Florida, and head of the ethics committee for the American School Counselor Association.

When the line’s unclear

Denise K. was torn when her teenage daughter returned from a school dance and said her friend Kelsey* was incoherently drunk when they dropped her off at home. Her daughter made her promise not to tell Kelsey’s mother, and Denise agreed. But then she learned that the other girls hadn’t waited to see if Kelsey made it safely inside.

“I would want to be told if that were my daughter,” says Denise. “Especially if she were in danger of alcohol poisoning or (if I was) wondering if someone slipped something else into her drink.”

Though it was 1:30 in the morning, Denise, her husband, and daughter drove to Kelsey’s house. If they found the girl passed out on the stoop, Denise was prepared to tell her parents. On the drive over, Denise’s daughter exchanged coherent text messages with Kelsey, who was safely inside and had just brushed her teeth. Satisfied her daughter’s friend was okay, their family turned around and headed home. Denise never told Kelsey’s mother.

Who to call? It depends

I struggled with whom to tell about Beth. I knew Beth’s parents, but not well enough to make this phone call. I cringed imagining how awkward it would be when we inevitably ran into each other at school. Plus, you never know how parents will react.

Who did that leave? Our rabbi? The police? It’s not always clear-cut, says Richard Weissbourd, a senior lecturer at Harvard’s Graduate School of Education, where he teaches a course on moral decision-making and children that addresses issues such as these.

“I know this is frustrating, but the answer is always it depends,” says Weissbourd. It depends on what you know about the people and the child’s relationship with them.
If there’s no imminent danger, Weissbourd suggests discussing the options with your child’s friend. They don’t have to tell their parents, but they have to tell a school counselor or someone like that and get help — and make it clear that you’ll be checking back.

As my daughter and I continued talking, she gave me our answer. Beth was seeing a therapist and my daughter knew the person’s name. I called the therapist and we spoke in a kind of code. The therapist couldn’t disclose clients’ names, but thanked me for the information.

In most cases, school counselors should be the first call, says Stephanie Rudolph, a therapist who has worked with teens for 15 years. They’re legally required to investigate and move quickly in an emergency, such as when a child is suicidal. They know the resources available and how to navigate conversations between kids and their parents.

When one of her teenage daughters shared that a friend was talking about suicide, Colorado mom Lisa T. told her daughter they had an obligation to contact the school principal. The teen agreed and her friend received help.

“What I tell my kids is that if they tell me something that is about someone else’s safety, health, or well-being, it is my responsibility as a member of the ‘village’ to act on that,” Lisa says.

Still, it’s wise to know something about the counselor or principal before going to them with such sensitive information. As in any profession, some are duds.

Juliann N. called the principal of their Oregon school when her 8-year-old daughter confided that a friend was having sex with her uncle and danced naked for him. A few days later, she received a furious phone call from the girl’s mom. The uncle was actually her boyfriend and she didn’t believe a word of her daughter’s story.

“She was crying, yelling at me, telling me that I ruined her life,” recalls Juliann. “I was absolutely shocked that the principal would give out my name and phone number,” she says. “It kind of made me never want to get involved again.”

When you ask your child to break a promise to a friend, the results can be devastating. She can get a reputation for being a tattletale or snitch and might be socially ostracized. Despite their very real concerns about social backlash, our kids share these secrets with us because it’s too much for them to handle alone. They want our help.

When breaking the news that you’ll be sharing this secret, Fox says, it’s important to emphasize the positive — that they’re a good friend, that you’re proud of them. Even if it ends a friendship, we need to be clear that the alternative may be having a friend who hurts himself or dies.

“This is so nuanced,” Fox tells me. “There’s no script to follow, just guidelines with the idea that you want to be a safe person for your kids to talk to now and forever.”

* Child’s name has been changed.