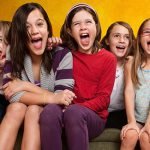 For a growing number of girls, the first signs of puberty are showing up earlier — sometimes as early as second grade. Here's what the experts say about how to handle it.

Puberty is one of the most difficult times in a parent’s relationship with their child. Cute, relatively malleable kids suddenly become grouchy and erratic. Their bodies change in ways that can be disconcerting to their parents. Heights surge, voices drop, and interest in sexuality comes to the forefront. Most of us would postpone this stage for as long as possible. But with increasing frequency, girls are sprouting womanly bodies in elementary school, when parents — and the rest of the world — expect them to be learning arithmetic, playing with dolls, and acting (and looking) like the children they are.

Experts agree that breast development in girls is happening earlier than it used to, though estimates vary as to how much earlier. A 2010 study of 1,239 girls found that by age 8, 18 percent of Caucasian girls, 43 percent of African American girls, and 31 of Hispanic girls had some breast development.

The beginning of breast development in the early elementary years is sometimes referred to as “precocious puberty.” But most of the time, it isn’t that. Puberty is a complex process triggered by the hypothalamus gland, which stimulates the ovaries to secrete estradiol and the testes to secrete testosterone. In girls, estradiol causes breast development, a growth spurt, bone-age advancement, and menstruation. In boys, testosterone causes the penis and testicles to grow, pubic hair growth and, by conversion to estradiol, a growth spurt.

Precocious puberty is a condition in which this process begins and progresses significantly before about the age of 7 for girls and before age 9 for boys. Treatment may be recommended to halt precocious puberty in order to maximize a child’s adult height; since puberty signals the bones to mature and stop growing, children who go through this process too early stop growing before they reach their full height potential. But for the majority of girls who start to show signs of developing breasts in the second or third grade, precocious puberty is not what is happening.

“Puberty has changed in the last 40 years,” explains Paul B. Kaplowitz, MD, PhD, Division Chief, Endocrinology at the Children’s National Health System in Washington, DC. “We are seeing more girls start breast development at 8 or 9 instead of 10 or 11, but the age at which girls start their period has changed much less.”

In other words, puberty for girls is beginning earlier and spanning a greater length of time. This extended puberty has some implications that parents of girls who are developing early should be aware of. But in most cases, it’s not a medical issue that requires treatment. In fact, it has become so common as to be considered the new normal.

In a report published by the American Association of Pediatrics, Kaplowitz and his fellow authors advise pediatricians faced with 7-year-olds showing signs of puberty, “Although a small number of such children have a disorder that requires thorough testing and treatment, the great majority of patients have benign, normal variants of puberty.”

Where Did the Little Girls Go?

No one is certain why puberty has changed or even whether it is a worldwide phenomenon or one localized in the U.S., the West, or industrialized nations. “It is relatively easy to track menarche [the first period],” explains Julie Deardorff, coauthor with Louise Greenspan of The New Puberty: How to Navigate Early Development in Today’s Girls. “It is much harder to track trends in breast development.”

And since science doesn’t completely understand why puberty starts, it is hard to know why it is now starting earlier. But experts agree the trend is closely related to the obesity epidemic. Excess body fat seems to be a trigger to the body that it can get on with the process of maturing. “We know that we rarely see early breast development in kids that are a normal weight,” offers Tonya Chaffee, MD, MPH, Clinical Professor of Pediatrics at the University of California in San Francisco.

There are other suspected culprits as well, though there is less hard data to explain their role with certainty. One is the increased exposure of children to endocrine-disrupting chemicals that can mimic hormones in the body. Another is family stress: Deardorff and Greenspan found links between high-stress environments and early maturation in girls.

If your daughter shows signs of breast development earlier than her peers, it may be only slightly reassuring to know that she is experiencing a normal variant of puberty. You still have to help her adjust to this new body and navigate the world looking older than she is.

The potential psychological effects of developing early are concerning. “The research shows that early maturing girls are more likely to have lowered self-esteem, initiate sex early, and get involved with drugs,” says Chaffee.
This is of course by no means a necessary outcome. Adults play a big role in helping their early maturing daughters adjust.

One way is to let your child know that even though her body may look different from her friends’ bodies, there’s nothing wrong with her. Explain that all girls go through these changes, she is just starting a bit earlier.

“We strongly advocate starting puberty education in school in the fall semester of fourth grade whether or not the majority of the class is going through it,” says Deardorff. “Just to normalize it.”

When you talk to her about her body, remember that she isn’t experiencing the sexual maturation that comes later in puberty. The hormonal mood swings and sexual feelings associated with puberty won’t start until closer to the time of her first period, which will likely happen closer to the time the rest of her peers get theirs.

So when you explain what is happening to her, use language that is appropriate for her age and don’t sexualize the changes her body is going through. Buy her bras that look like tank tops or clothes she would wear.

“Do lots of normalizing,” says Deardorff. “And deal with body shaming issues, bra snapping and such, as they come up with the school. Don’t be afraid to go talk to the teacher. But keep it all positive. Remind her that bodies come in all shapes and sizes. She should be proud of hers and take good care of it.”