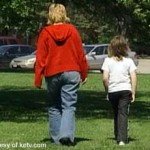 One mom's fight for her child's identity

It all started at a family wedding in Colorado. Ellen James* took her 4-year-old son, Ben, to the bathroom. It was crowded, so they shared a stall. Watching his mother going to the bathroom, he began to loudly pepper her with questions about her unfamiliar anatomy. “He seemed shocked,” James recalls. “He had two brothers, and I guess he assumed everyone had a penis, the same way everyone has a nose, or an elbow.”

At the time, her son’s response made her laugh. Later, she realized it marked a turning point. Ben had never shown any interest in his older brother’s toys, and he’d always been drawn to girls’ clothes. To simulate long hair, he wore towels or arm chair covers on his head. When he was 3, he was a princess for Halloween.

Until the trip to Colorado, Ellen James and her husband suspected their son might be gay. But this was different. “After that, he started talking about being a girl,” she says. “He began to make it clear who he was, and who he was didn’t match his anatomy.”

Living in a conservative Midwest town, James and her husband didn’t know anyone with gender identity issues. The family is solidly middle class: Ellen James practices family law, her husband manages a manufacturing company. All three of their children were baptized in the Catholic Church, where James attended Sunday services. The prospect of raising a child who felt like he was born into the wrong body pushed them to the edges of their understanding. “It was a whole new reality — and not something we were prepared for,” James says.

Born in the wrong body

After the Colorado trip, Ben began drawing pictures of himself in boy’s clothing, but then adding thought bubbles above his head to show what he felt to be his actual self: a long-haired girl in a bathing suit. He asked his family to call him Kate. And at night, he prayed for God to “make his outsides match his insides,” as he put it.

Ellen James and her husband began reading everything they could find on gender identity and transgender children. One high-profile expert’s research warned that allowing children to dress in the clothing of the opposite sex and to identify themselves as the opposite gender — even in play — could create a self-fulfilling prophesy. In response, James and her husband tried to keep the door open for Ben to embrace a male identity if that was what he decided: James kept Ben’s hair in a boyish buzz cut and persuaded him to paint his room teal instead of pink.

But such expert opinions conflicted with other research James read — and ultimately with her instincts as a parent. James says her child never wavered. Whenever she checked in and asked him what he liked about being a boy, the answer was always the same: “Nothing.”

Ultimately, Ellen James and her husband consulted a therapist who specialized in transgender issues; they took Ben to see the therapist as well. The more they learned, says James, the more convinced they became that they should allow Ben to live as a girl named Kate, if that was what he wanted.

In the end, Ellen James says she and her husband took the advice of one expert who suggested that they follow their child’s lead. “The counselor said Kate would tell us what she needed and when,” James says. “As adults, that’s excruciating. You want to know what to expect, what the next step will be. But it’s been true: She’s let us know every step of the way.”

In first grade, their child was Ben at school and Kate fulltime at home. The following year, Kate asked her mother when she could, “go to school as myself.” Ellen James wanted to move slowly — “At that point we were still second-guessing ourselves,” she says — and she suggested that third grade would be a good time to make the transition. “Katie threw herself face down on the couch,” James recalls. “That seemed like forever to her.”

Deciding that his mother wasn’t moving fast enough, Ben outed himself. He told close friends at school that he was a girl; he also told the school counselor.

As the school year wore on, James realized that living a double life was taking a toll on her child. At home, Kate was exuberant, spirited, and happy; at school, Ben was withdrawn, quiet, and shy.

So Ellen James met with school officials and told them Ben wanted to start third grade as a girl. She was apprehensive about how officials at the Catholic school would respond, and was pleased that their initial reaction was positive. “At first, everyone seemed to be on board,” James recalls.

When word got out to the archdiocese, however, the school changed its tune. Over Easter break school officials informed Ellen James that if it was “Kate” who showed up after summer break, she would no longer be welcome at school. James said that from this point on, the principal, teachers, and other parents stopped speaking to her. After the break, her child’s social life also took a turn for the worse. Teachers no longer called on the student whose name was still Ben on the roster. On the playground, kids taunted Ben, and told him he was headed for hell. “My father says you’re committing one of the Seven Deadly Sins,” one kid said.

“It was tough on Kate, because these were kids she thought were her friends,” Ellen James says. “It bothered her that they were fine until the adults got involved: That was when the remarks got vicious.”

As a lifelong Catholic, Ellen James felt equally devastated. “I felt my whole world come crashing in,” she says. “Everything I’d been raised to believe — lessons about tolerance and acceptance — seemed like a joke.”

Now, two years later, Kate attends a public school where she’s thriving, according to her mother. School administrators and teachers know Kate’s situation, and they’ve been supportive from the start. Kate has friends and is invited to play dates and slumber parties. (Kate’s close friends at school know about her identity, but many other kids at her school do not.)

“Your goal as a parent is for your child to be healthy and happy, and she is now,” Ellen James says.

But James’ relief is tinged with apprehension. There have been problems: Last year, for example, a friend turned on Kate when she learned that Kate had been born a boy. The girls are in different classrooms this year, and so far everything has been peaceful. Still, Ellen James knows there are rough patches ahead, particularly in middle and high school, when kids can be intolerant — especially about sexuality and gender issues.

Kate and her parents will also face a choice about whether or not to start hormone therapy. The treatment, which originated in the Netherlands and has been used in the U.S. for just a decade, initially forestalls puberty; later, around age 16, the child can take estrogen or testosterone to develop appropriate physical characteristics. (Once a transgender young person reaches adulthood, he or she can elect to have a surgical sex change.)

For now, Ellen James is too busy to worry about the future. Along with three kids and a legal practice, she’s regional director for Parents, Families and Friends of Lesbians and Gays (PFLAG). James gives speeches regularly to civic groups, school counselors, and other organizations, telling her family’s story. “I feel like I’m educating the world around Kate,” she says.

Ellen James knows many people don’t agree with the choice she and her husband have made to let Ben become Kate. “People act as if a little redirection would fix it, as if she were a bratty kid in a candy store,” James says. One teacher even suggested that James was indulging her child’s behavior because she really wanted a daughter.

“But this isn’t a whim we came up with when we were bored one day,” Ellen James says. “This transition has been going on for years.” Ultimately, James is convinced that there wasn’t an alternative ending to her child’s identity story. “It isn’t a choice,” James says. “It’s who she is.”

*Ellen James uses a pseudonym to protect her family’s privacy.