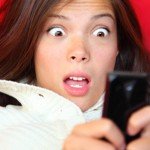 The lowdown on sexting

Everything you wanted to know about this teen smut trend but were afraid to ask.

Thirteen-year-old Hope Witsell liked a boy and wanted him to notice her. So she sent a topless photo of herself to his cell phone — and received more attention than she’d bargained for. After another girl grabbed hold of the phone, the X-rated image  circulated throughout Hope’s Florida middle school.

Sexting may seem like old-fashioned flirting in a high-tech guise, but as Hope discovered, it can produce results far more dangerous than batting eyelashes ever did. First, Hope’s photo made her the target of bullying. Later, when the administration got involved, the photo became grounds for her suspension. Last September she hanged herself.

Hope was the second teen to commit suicide after a sexting incident. Jessica Logan, 18, of Cincinnati, Ohio, killed herself in July 2008 after her boyfriend forwarded explicit photos of her following the couple’s break-up.

The images may look naughty — or even obscene — but experts say most of the teens sending them aren’t. According to Russell Sabella, a professor of school counseling who specializes in tech issues at Florida Gulf Coast University, kids who engage in sexting are simply naïve about the power of technology.

“They don’t realize how easy it is to lose control of information and data when it leaves their gadget,” he says. “It [starts out as] a social thing, but it can quickly come back to hurt them.”

According to a Fall 2008 study by the National Campaign to Prevent Teen and Unplanned Pregnancy, as many as one in five teens had sent sexually suggestive photos of themselves to someone else and a third had received such images. Numbers from more recent surveys, however, do not show a clear trend. A 2009 study from the Pew Research Center suggests that the numbers of teens who are sexting might be lower — but that older kids are far more involved. Pew’s results showed just 4 percent of the 800 teens polled said they had sent explicit images, and 15 percent had received them. The Pew survey also found that 17-year-olds were twice as likely to engage in sexting, compared to 12-year-olds. Most recently, a fall 2011 survey conducted by MTV and the Associated Press found that 13 percent of teens surveyed sent naked pictures of themselves and 21 percent received such photos, a three-percent increase in both categories from their Fall 2009 survey.

But perhaps there’s a silver lining to this troubling trend: teens are increasingly aware of issues around sexting. In MTV/AP’s latest survey, 71 percent of teens surveyed said sharing naked pictures on the Internet or via cell phones was a serious problem.

How can you make sure your kids have smut-free cell phones? Experts advise both monitoring and restricting their phone use. Many phone plans limit the number of texts that can be sent per month and block images. You can also justify doing spot checks of your teens’ phones if you pay for all or part of the bills. The Pew study found that teens who paid for their own phone bills were more likely to report that they had engaged in sexting. About 17% of those teens had sent nude or semi-nude images, compared to 3% of those who had a parent or someone else pay for all or part of their bills.

“It doesn’t eliminate the risk, but it reduces the risk,” says Sabella, who keeps tabs on his 16-year-old son’s phone.

Work with the school

Since most sexting incidents are uncovered not at home but in school, parents should collaborate with schools to help curb sexting. Last summer the Houston school district voted to ban sexting and warn students that their phones would be taken away and police called. The Miami-Dade school district plans to incorporate lessons on tech safety into its curriculum.

If you want to help your school raise awareness, approach your local law enforcement agency, says Michelle Boykins, a spokesperson for the National Crime Prevention Council. Police officers and prosecutors can come to schools to talk about the laws affecting sexting, which vary between states, and give examples of real cases they’ve seen.

Parents and schools should also work together to help victims, Boykins says. Kids who are harassed after a sexting incident need to be monitored for extreme behavior changes that could signal depression. A safe haven in school should be provided, and if the bullying gets overwhelming, get police involved. Jessica Logan’s parents filed a lawsuit against her school, claiming administrators didn’t do enough to stop classmates from harassing her.

Finally, it’s crucial that parents understand that sexting doesn’t just involve issues of technology and bullying. It’s also about, well, sex. Parents should use the sordid trend as a way to talk to teens about sex, Boykins says. Remind teens that respect should be the basis of a relationship — they shouldn’t feel pressured to exchange explicit photos to attract or keep a partner.

“We need to help them understand that not everybody they interact with in a digital environment has their best interests at heart,” Boykins says. “Relationships at that age change overnight. They’re not thinking about the human factor in the technology that they’re using.” Technology may let them flirt in new ways, but, at heart, the old warnings about relationships still apply.