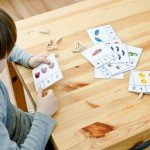 Simple ways you can practice math at home with your child.

No one questions the importance of developing of early math skills. Proficiency in basic arithmetic of whole numbers and fractions is expected throughout a child’s academic career, and early experiences can make all the difference.

How do you engage your child’s natural curiosity?

Standard drills using pencil and paper have their place, providing repetition that is necessary to master a skill, but they are not likely to spark your child’s interest. Much more effective in this regard are hands-on activities that require mathematical thinking. Here are six ways that you can help your child develop early math skills: