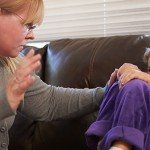 Is spanking discipline or abuse?

It's common, it's cultural, it's legal in all states in the nation. But does spanking work?

I grew up with two kinds of spanking. My mother, a gentle and affectionate Brit raising four small children without much support, rarely spanked. Well, she often smacked our butts, jokingly, affectionately, with a laugh, sometimes followed by a tickle or hug. If that’s spanking, she was doing it wrong. It wasn’t a punishment. It became a joke between us. My father — Irish, angry, probably a survivor of extreme corporal punishment as the eldest of 10 — was the designated disciplinarian. And, if we did something worthy of punishment, he would be called upon to deal it out. Even if not called upon, he often raised a hand.

Since those days, spanking has lost its veneer of normality. Twenty years ago, studies showed that 74 percent of parents used spanking as a disciplinary practice. Research suggests many parents now feel torn about this age-old parenting practice. In a survey of 3,000 parents across the country, only 19 percent of parents believe spanking is part of the standard parenting toolkit, but 53 percent say that threatening a spanking is moderately to extremely important and 1 in 4 parents admit to spanking their children “a fair bit” to “very often.” (The truth of such self-reported numbers may in fact be higher because the behavior ignites such disapproval.) Suffice it to say, spanking is not dead. Parents continue to decide where they stand on the issue more based on their own family history than a single cultural consensus.

When it came to raising my own children, it didn’t take much soul searching. My mother and I are close. I confide in her. My children love her. The opposite is true of my late father. We were never close. I didn’t trust him as a child and refused to leave him alone with my own children. So they weren’t close to him either. At best, my siblings and I survived him. Possibly, according to some compelling research, not even that. “Being hit by parents is a very stressful experience,” explains Murray Straus, Professor of Sociology, founder and Co-Director of the Family Research Laboratory, University of New Hampshire, and the author of numerous defining books and research studies on corporal punishment. “And it is a chronic stress that, for a third of American kids, begins in infancy. The average age of cessation is 12. So it is a chronic stress for 12 years. That affects the brain.”

Knowing firsthand how I feel about the parent who hit me and somewhat familiar with compelling research on the negative outcomes, I fell firmly into the no-spanking camp when it came time to raise my own kids.

But what is spanking? The dictionary definition — to strike especially on the buttocks with the open hand — leaves a lot to be desired. How hard? How many times? Is it a joking swat to the bottom or a euphemism for a belt to bare flesh? Researchers have specified further that spanking is done with intent to discipline and that it does not leave a mark or bruise. But this still leaves a lot of questions unanswered.

Regardless of the exact definition, more than 100 studies agree on this point: Spanking is not only ineffective, it has negative outcomes. “Parents have no way of seeing the damage done,” explains Straus on a recent video. “Because it doesn’t show up for months — or years — later.” The official statement on spanking from the American Academy of Pediatrics puts it like this: “The more children are spanked, the more anger they report as adults, the more likely they are to spank their own children, the more likely they are to approve of hitting a spouse, and the more marital conflict they experience as adults. Spanking has been associated with higher rates of physical aggression, more substance abuse, and increased risk of crime and violence when used with older children and adolescents.”

Deciding not to spank and not doing it, though, are two different things. Even Straus acknowledges that as some point parents face the decision again, less rationally, when negotiating peer disapproval and fury a toddler tantrum. “The advice that professionals give,” says Straus. “Is to avoid spanking if you can. And everyone accepts that. But if you are the parent of a 2-year-old, it only takes a day to discover” that this is harder than it seems.

Faced with rambunctious toddlers, I spanked each of my kids. Once.

Like my mother, I did it wrong. My son laughed and tried to spank me back, undermining the entire effort and making me laugh. So I changed tactics. My daughter laughed and repeated what I was telling her not to do so I would spank her again. In both cases, it became a game. It was clear from my small experiment, that in order to use spanking as a deterrent, I would have to hit these babies who trusted me with enough force to hurt them. Why would I do that? So, since I couldn’t bring myself to really spank my children, I explained why their behavior was inappropriate instead. That took more patience but it was effective. Both of my now-teenagers are respectful, helpful proto-adults.

“If there is any age when you should not attack a child,” advises Straus, “it is when they are an infant or toddler because that is when the brain is in its period of most rapid development and most easily set on the wrong track.”

Spanking occurs in most of the historical record. It predates the Bible. But it was not always a way to discipline children. It started out with willing, adult (female) participants — usually as part of pagan fertility rites. (There are a few examples of this throughout history, but during the Lupercalia festival Roman priests spanked willing women to help them overcome infertility.) The Biblical proverb — “he who spares the rod hates his son, but, he who loves him is careful to discipline him” is often cited to defend spanking, but according to experts that may be a misinterpretation. In a time of shepherds who used a rod to steer sheep, it was more likely a metaphor for guiding a child. Even if this phrase was intended literally, another Proverb also prescribes punishing disrespectful children by having birds to peck out and eat their eyes. No one advocates for that.

The word discipline means — at its root — teach. It does not mean to beat or punish. Another phrase often used as an edict to spank kids “spare the rod, spoil the child,” is also attributed to the Bible. But it’s not. It comes from a satirical poem, Hudibras, by Victorian-era novelist and poet Samuel Butler, and the phrase refers to sex, not parenting.

None of this is really relevant, though. Somewhere along the way, in most cultures, and all throughout history, smacking unruly children became a thing humans do. And these proverbs and phrases are among the many ways we have managed to find reasons, euphemisms, rationales, and excuses for the practice, even though decades of science says it’s not only ineffective but has lifelong negative impacts on children. The more violent the culture, the more the children get smacked. (Or perhaps it’s the other way around.)

The recent case of Minnesota Vikings running back Adrian Peterson points up another problem with spanking: It’s very hard to determine when it has crossed over to abuse. Peterson whipped his 4-year-old son with a tree branch stripped of leaves — a switch. The beating left welts, broke the skin, and left marks all over a small child who was helpless in an altercation with an adult professional athlete. If Peterson had done that to someone his own size, he would be in prison. But because he did it to his 4-year-old child, he might have been within the law. Peterson called it a whooping much like he received at the hands of his own parents — and deemed it reasonable discipline. (He accepted a plea bargain of a fine of $4,000 and community service, so it will not be decided in court.) He credits his own father’s beatings with his own wild success as an adult. Though there’s no evidence of this, Peterson’s experience does track with studies that show children who are spanked or beaten are more likely to hit other children, their own children, their spouse, and others when they grow up. It’s not surprising: their parents taught them that hitting someone is an effective way to resolve conflict and “teach someone a lesson.”

According to a Google search on Adrian Peterson, whether whipping a small child with a tree branch is abuse remains a matter of debate in our culture. Striking a child, as long as it’s within the context of reasonable discipline, is legal in all states. But spanking — when dealt in anger as it often is — sometimes crosses over into our legal definition of child abuse. So the courts are often left deciding what blows are abusive and which are parenting. That’s one reason that more than 40 countries have outlawed spanking entirely — from Norway and the Congo to Brazil and Israel. If it’s not allowed at all, there is no gray area to dispute.

Just because our parents did it — or their parents did it — is no argument to continue to do it. Our parents and theirs did a lot of things we don’t do anymore — serve laudanum-spiked baby bottles, ride in cars without seat belts, arrange marriages, and drink alcohol during pregnancy — because we learned that they’re bad for us or our children. I’m lucky that I was so bad at spanking. My kids trust me. My father, who rose to the task and behaved like the father his father taught him to be, was an old man before he could admit that he regretted that role and wished for a different kind of relationship with his children. Much too late.