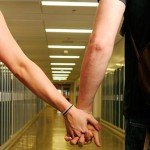 Dating is part of growing up, but early dating can be risky.

Many adults remember having their first boyfriend or girlfriend in sixth, seventh, or eighth grade. Some consider it a normal step for kids entering adolescence — a rite of passage like acne or being embarrassed by your parents — but it may be time to reconsider.

Turns out, puppy love may not be quite as harmless as it seems. According to research, dating in middle school is tied to poor study habits and even dropping out as well as behaviors such as drinking alcohol and doing drugs. Compared to adolescents who waited or dated early and then reversed their course in high school, early daters reported twice as much drug, tobacco, and alcohol use and dropped out of school at four times the rate.

Pamela Orpinas, a child development researcher at the University of Georgia, made this startling discovery over the course of a seven-year longitudinal study where she followed more than 600 kids in Georgia from sixth to twelfth grade.

Every year, she’d ask the students a series of questions about everything from homework habits to whether they’d tried pot. The pivotal question, just a single line in the survey, was whether the child “had a boyfriend or girlfriend (someone that you dated, gone out with, gone steady with)” in the previous three months. In addition to collecting the kids’ survey responses, Orpinas gathered information from the children’s teachers. Every year, teachers rated the children’s study skills — such as completing homework, reading assigned chapters, being organized, and doing extra credit work — from high to low.

Her study, published in the Journal of Research on Adolescence in 2013, is among the first to look at how early dating is related to school work, and the results are pretty clear: “The kids who report little or no dating, their teacher evaluations are consistently higher — and the kids who report dating more, their teacher evaluations are consistently low.” What the study leaves unexplained is whether early dating was associated with broader risk factors for problem behavior — such as low socioeconomic status — or whether early dating was linked to problem behavior irrespective of other risks.

While it won’t surprise most parents to hear alcohol, cigarettes, and drugs listed as problem behaviors, it’s likely to raise eyebrows that early dating belongs on that same list. But it does, Orpinas says. “It’s a risk factor,” she says, “and it’s associated with other problem behaviors.”

What is “dating” in middle school, anyway?

Over the course of her study, Orpinas left the meanings of “dating,” “going out with,” and “going steady” up to the kids’ interpretations. Partly, she says, because kids at each stage and grade know what these things mean to them — and that’s more useful for self-reporting survey responses than getting bogged down in a definition, she says. “In the end, it’s some kind of romantic involvement.”

The big questions, then, are what really constitutes dating and when should you start letting your child date? For instance, what about so-called relationships that exist solely via text message — a trend dubbed D8-ing in a Wall Street Journal story. Are these situations, where kids text incessantly but barely utter a word to one another, count? It’s a gray area — but if you think kids would report them in response to Orpinas’ survey, they probably do. “It’s definitely an area for further research,” Orpinas says, warning that any relationship-like activity that dominates hours of a middle schooler’s time is a red flag. “We had one participant who would talk on the phone from 6 pm to 4 am with her boyfriend,” Orpinas recalls, lamenting the lack of balance in the girl’s life. Even when kids are only texting, she says, “parents really need to step in and see how much time they’re spending.”

Text-only dating is just one facet of the complex early dating scene, along with “more than friends” and “Facebook official” and everything in between. The only real way to find out what counts? You’ll have to have that conversation with your child.

From 2003 to 2009, as Orpinas was collecting the survey data and spotting the tie between early dating and poor study skills, she admits she forbade her daughter (now in college) from dating till she turned 16. “To my surprise, she was very relieved,” Orpinas says. “She didn’t have to deal with the peer pressure.” Orpinas reasons that early dating affects schoolwork negatively because these relationships tend to be short — and when it ends, the kids are still in the same class. She likens it to the emotional fallout that often comes from adults dating coworkers.

Forbidding kids to date until they’re 16 is a popular solution. Vic, a middle school teacher and father of six, says, “Dating is about learning to establish stable romantic relationships,” but tweens just aren’t capable of that yet. “Middle schoolers need to be learning to establish stable emotional self-awareness,” he says. “Pairing up during early adolescence makes about as much sense as smoking at a gasoline refinery.”

Feona Sharhran Huff, mom of a middle school girl, was disturbed when a boy asked her daughter out. “I have seen the emotional effects that dating has on some of my friends’ middle school children,” she says. “The girls post things [on Facebook] like, ‘I love him but why is he doing me like this?’ and ‘Why doesn’t he call me? I need to talk to him,’” says Huff, adding that these aren’t the types of thoughts or emotions she thinks girls should experience at this age. To Huff’s delight, her daughter told the boy no. “[I] wanted to shed tears of joy when she said that she told the young man that she was too young and had to focus in her studies,” she says.

Or let them be

Yet simply banning dating till later may be neither simple nor effective. With girls reaching puberty earlier, is it wrong to force kids to ignore their biological development? And what about the kids who’ll date anyway, just behind your back?

There is a silver lining here: at a certain age, for certain kids, good, strong dating relationships are really positive. “Being in a good relationship as an older adolescent or young adult is a protective factor,” Orpinas says. Specifically, studies show that older kids with good grades tend to seek out partners with similar academic standing — and those students tend to continue to do well. (Kids with lower grades, however, tend to choose romantic partners for other achievements, such as “good at partying.”) So what’s the age cutoff? “That’s the million dollar question that every mother wants to know,” Orpinas laughs.

After spending years evaluating this research and using it to inform her own parenting, Orpinas offers this advice. Some kids are under so much pressure to get into relationships they don’t really want, they may need their parents to set limits. Encourage them to make friends and get to know each other, she says, rather than date.

“Dating should not be a rite of passage,” she says. Not this early.