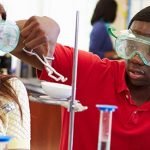 When students get good grades in certain subjects and lesser grades in others, they may take it as a sign of what they're good at. This could explain the high rates of attrition in STEM subjects in high school and college.

Over the holiday break, my kindhearted, hardworking, straight-A niece was in distress: She was facing her first F. Ever.

I’ve seen her toil away at school — taking AP English with the school’s notoriously harshest grader, staying behind to study while our entire family hit the slopes — and in life — keeping her promise to babysit when tempting plans arise and feeding those darn turtles (again!) while certain neighbors are away. She’s capable and ambitious, saving money to buy a camera to make documentary films — and then entering a contest I sent her on a whim (she become a finalist with this film). She’s a nose-to-the-grindstone kind of girl, so when she’s facing an F (or maybe a D), it’s not because she’s suddenly become a slacker.

Terrified to tell her mom, she tested the waters by telling me. It’s a moment, I told her, when you really see what you’re made of. It reveals character. Will she slink away, or buck up and try again?

But as we talked, I realized she was facing a divergence of two paths worthy of Robert Frost. You see, she’s taking both science and humanities classes in her second year at college. At the same time.

In college, I did the same thing for a year and a half. I remember getting A’s in UCLA’s North Campus humanities classes and struggling to get B-‘s and C’s in the South Campus science and math classes. I also remember a 95 on a humanities paper being a straightforward A, while a 30 percent (what I assumed was an F) on a chemistry lab could magically become a B+ with the curve. I worked hard in both — maybe harder in the STEM classes — but it felt like the writing was on the wall. When you consistently earn higher marks in one area, maybe that’s a sign, right?

Now, watching it happen to my niece, I realize it’s not writing on the wall. It’s a matter of assuming that grades at the same university are somehow comparable. They aren’t. I urged my niece not to give up just because STEM teachers are harsh graders, not to take it as a message to ditch those arduous science courses.

I told her she’s not alone, it happened to me and I let it steer me away. But if my anecdotal experience isn’t enough, a new report released yesterday has the numbers to back me up. Here are the dismaying trends from a study about STEM in America (they polled 55,000 teachers and reached 95 percent of U.S. high schools to generate their data, trends, and projections):

Of course, grading isn’t the only culprit, but I believe it’s part of it — and something I hope schools consider as they improve (Stat!) STEM engagement programs. I’m not saying hand out easy A’s – that’s neither motivating nor inspiring. But many kids, looking for feedback about their career prospects, may do the same side-by-side comparisons of their grades, feel their STEM interest start to wane, and make erroneous decisions about whether or not to move forward.

Here’s another take on this situation: Richard Rusczyk, a former Math Olympiad winner and the founder of the online math program “Art of Problem Solving,” advocates changing grading expectations. He’d agree with me about not handing out easy A’s, but he would characterize what happened to me — and almost happened to my niece — as falling prey to the “tyranny of 100%.” His argument is: “It’s supposed to be hard — if you’re getting 98% in a class… it may be too easy.” Read more about Rusczyk’s take and the upside to lower grades in STEM (particularly math) here. The problem with overcoming the “Tyranny of 100%” is that, right now, if you opt out, you’re on your own. By choosing to struggle and accepting lower marks, you may be forfeit your spot in a prestigious graduate program.

By the way, my niece committed to retaking the course, working hard, and doing better. Then, she got her grade. The final grade, with the curve, was a B.