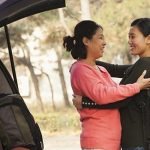 Who’s afraid of an empty nest?

A mother braces herself for one of the biggest parenting transitions of all: her youngest child’s departure.

This fall, my youngest child will leave for college. Over this last year of college visits, SATs, college applications, rejections, and acceptances, I haven’t allowed myself to think about it — her actual departure — much. But now it’s almost here.

Her two older brothers are both already in college, so I’ve been through it before: the packing, the goodbyes, the empty chair at the dinner table. Then they’re back (college vacations are long!), and just when I’ve grown used to their noisy presence, they’re off again. I ache every time they leave. But we talk on the phone and text a couple of times a week, and then another vacation comes around and they’re back again.

This time it’s different — and not just because my daughter will likely be going even farther away than my sons. When each of the boys left home, there was always another child (or two) to focus on. This time, all three kids will be gone.

When I try to imagine what a home without any kids will be like, the feeling is similar to the way I felt when I was pregnant for the first time. As the due date drew closer, I tried to get ready. I borrowed a crib, bought a car seat, and received lots of tiny, adorable outfits. In a crazed nesting frenzy in my eighth month, I scrubbed and organized every drawer and cupboard in my house. But there was no way to prepare emotionally or mentally. I just had to wait, as motherhood hurtled toward me. I knew it would change my life forever, but I didn’t know how.

Most parents eventually wind up where I am, of course. It’s a phenomenon so commonplace there’s even a well-worn, anthropomorphic name for it: The Empty Nest. And though it’s not a clinical diagnosis, Psychology Today lists empty nest syndrome as a common transition period during which many parents, who’ve successfully encouraged their children to become independent adults, experience feelings of loneliness or loss. I’ve talked to friends and acquaintances who have experienced it, and in many cases their reactions run to extremes. One mother used the word “bereft” when she recalled the first few months after her daughter left for college. Another distraught dad I barely know stopped me on the street and talked for 20 minutes the day after his daughter left. But there were also the parents I met at a party who were gleefully counting the days until their daughter, a difficult teen, packed her bags. “She’s so ready,” her father told me. “And so are we.”

Most of the empty nesters I talk to miss their children, but they point out advantages to life without teenagers, too. There’s the house that, when you clean it, actually stays clean. The freedom to work late on a weekday if you feel like it, or have a spontaneous drink with a friend. Some parents I know have launched second acts after their kids left home. One friend embarked on a new career path, another travels frequently and recently took a Spanish immersion class in Guatemala, a third has thrown herself into political activism. Some marriages splinter after the kids leave, but many relationships seem to take on a fresh romantic glow as couples enjoy date nights and plan kid-free getaways.

I also know a number of parents for whom the empty nest didn’t last long: their kids returned home after graduation, some for short stints, others for a year or two, still others for the foreseeable future. So-called “boomerang” kids are common in the Bay Area, where housing prices are stratospheric, but it’s a phenomenon that’s happening nationwide. According to a 2012 Pew survey, 24 percent of adults ages 18 to 24 moved back in with their parents after leaving home, primarily because of economic conditions.

Many parents experience intense feelings when their kids leave home. In a starkly candid column for the Washington Post, Michael Gerson reports that dropping his youngest son off at college was, “the worst thing that time has done to me so far.” He says his son’s “life is starting for real. I have begun the long letting go. Put another way: He has a wonderful future in which my part naturally diminishes. I have no possible future that is better without him close.”

Another dad, actor Rob Lowe, also found it heart-wrenching to watch his son pack for college. “I know that this is his finest hour,” Lowe writes in Slate. “But looking at his suitcases on his bed, his New England Patriots post­ers on the wall, and his dog watching him pack, sends me out of the room to a hidden corner where I can’t stop crying.”

However, studies shows there’s a silver lining. An article on Oprah.com offers an upbeat assessment of how parents fare over time: “Research is confirming what many mothers have been discovering — that ‘empty nest’ syndrome isn’t so empty after all. These days, the classic description of lingering depression, apathy, and loss of identity (‘Who am I if I’m not taking care of the kids?’) is no longer typical.” The article attributes this change to an increase in the number of women with fulfilling careers, as well as the ubiquity of cellphones and computers, which make it easy for parents and children to stay in touch.

Indeed, according to new research, empty nest syndrome is evolving along with family gender roles. Christine M. Proulx, associate professor in the Department of Human Development and Family Science at the University of Missouri, led a 2008 study of couples whose children had left for college to determine if there are differences in how fathers and mothers fare when a child leaves home. Proulx and and her team conducted phone interviews with 142 families and found that both mothers and fathers responded positively to the transition. “There were some adjustments, of course,” says Proulx. “All family transitions require some adjustment. But most of the parents were awe-filled by their children and their accomplishments. One mother told us, ‘You finally realize the fruits of your labor.’ There wasn’t a sense of, ‘what am I going to do with my time?’ These parents had plenty to do.”

Social psychologist Susan Newman quotes a young man who complained that dealing with his parent’s unhappiness, while also trying to strike out on his own, is an undue burden: “As the son of a mother that doesn’t let go, I ask you all, please, let us go, we won’t be too far away. But, please, don’t place this weight on our shoulders.”

I don’t know what it will be like when all three of my kids are gone. Over the long parenting years, there have been many moments when I’ve longed for time to myself: a quiet house, no one needing homework help or lunch or a ride anywhere. I’m particularly looking forward to having more mental space. For the last two-plus decades, my brain has been crammed with urgent but ultimately useless details: soccer practices, carpools, school functions, summer camps, school project deadlines, a perpetual shopping list, and an ever-changing calendar of who needs to be where and when. I imagine reading uninterrupted whenever I want to, hiking without whiny companions, skipping a meal from scratch in favor of an improvised salad.

But I won’t know what it’s like until I get there, just like when my first child was born. The first time I put my newborn in his car seat, his head slumped over to the side — and I called my mother in a panic. “What if it’s hurting him?” I wept. My mother talked me off the ledge that day, and I gradually figured out what I was doing. I remind myself of that now, as this new empty nester stage draws closer. Once upon a time I didn’t know how to do be a parent, either. But I learned.

Meanwhile, I think about my daughter and all the adventures she has ahead of her. I look forward to seeing her grow and flourish in her new life away from home. After I drop her off at college, I imagine myself crying on the flight home, just as I did after I said goodbye to my boys. There will be a longing, yawning sadness — but there will be pride, too, as it dawns on me that I’m the parent of three children who are now adults, making their own way in the world. And that’s how it should be, after all. The empty nest cliché , which to me has always had a cloying ring to it, seems fitting here: If the nest is empty, it means they’ve learned to fly.