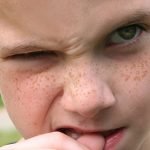 Young kids are prone to all sorts of bad habits and repetitive behaviors — some more disruptive than others. Here’s what the experts say.

It was the day of the second grade winter concert. Heather (not her real name) watched from the first row as her son’s class filed onto the stage. As the kids started singing, she watched her son repeatedly reach up to twirl his hair. Over and over again, he’d bring his hand down, only to bring it right back up again. Stop twirling your hair, she silently telegraphed across the room as hard as she could, hoping the words might somehow find their way into his head. “It was really conspicuous,” recalls Heather. “I’d noticed him doing it for a few weeks before that but I hadn’t realized it had become such a habit.”

A few months earlier, Heather recalled, her son had done this eye-squinting thing, where he’d wrinkle up his whole face a few times when someone asked him a question. And before that, it was repetitive yawning that didn’t seem related to being tired. She’d never worried too much about these behaviors before, but seeing her son’s hair twirling on display made her worry something might really be wrong. “I didn’t handle it all that well,” she admits. “Luckily I mentioned my concerns to his principal, who said it looked to her like something that would probably pass quickly if I just ignored it. And she was right.”

What’s behind that behavior?

Hair twirling, lip-licking, throat clearing, sniffing; beginning around age 3 and lasting well into the elementary school years, kids are prone to all sorts of repetitive behaviors, some more disruptive than others. You may have heard these kinds of repetitive behaviors called tics. And they may be, although they aren’t necessarily.

“True tics have a neurobiological foundation,” says Dr. Kurt Freeman, Professor of Pediatrics and Director of the Behavioral Pediatrics Treatment Program at Oregon Health & Science University. There are a variety of definitions for tics, says Freeman, but they boil down to a few key features: Tics are repetitive, non-functional movements or sounds that are brief and rapid in nature.

Tics are more common in boys than girls. Kids with chronic tics — those lasting more than a year — are more likely to be diagnosed with ADHD or OCD. Tics may go away for a period of time and return. Parents may notice that the behavior disappears during a focused, enjoyable activity like playing guitar, and it may become more frequent during times of stress, illness, fatigue, or boredom.

But just because your child has developed a tendency to yawn or blink or sniff excessively doesn’t mean they have a tic disorder — or even a true tic. “There is a difference between tics and what we might call repetitive, body-focused habits and behaviors — things like the hair twirling and shirt chewing and nail biting,” Freeman says. “Those behaviors could be tics, but it’s also possible that they aren’t.”

Behaviors like these are pretty common. About 25 percent of kids will exhibit at least one tic or tic-like behavior during their childhood. The majority of these are what are known as transient tics; they disappear within a month or so.

“If you watch a group of little kids, kindergartners or first graders, you’ll see them doing all sorts of repetitive behaviors that are more about sensory refinement — things like hopping and spinning are some common ones. As many as 25% will have tics, for instance, blinking, head and neck movements, throat clearing—but most remit without any treatment whatsoever,” says Matt Specht, a psychologist in the Tic and Repetitive Behavior Disorders Clinic at Johns Hopkins Medicine.

A big caveat: The sudden onset of tics or involuntary purposeless movements in children could be a sign of Pediatric Acute-onset Neuropsychiatric Syndrome (PANS) or Pediatric Autoimmune Neuropsychiatric Disorder Associated with Streptococcal Infections (PANDAS). According to Stanford Children’s Health, these two complex, related syndromes are often overlooked by medical doctors who assume there is not an underlying medical cause for the patient’s psychiatric symptoms. Parents who are concerned about a child’s repetitive behavior should start with a visit to the pediatrician, who can advise whether or not your child should be tested for strep, which is thought to trigger PANDAS, or referred to a neurologist or clinic specializing in the treatment of these syndromes.

In the absence of a medical cause, Freeman says, it’s best to try not to focus on the behavior. “We encourage parents to be less reactive and more matter-of-fact about these behaviors and just have more of a monitoring eye, seeking guidance from their primary care physician as the behaviors persist,” he says.

“If parents want to explore it with kids, a good time to talk about it is when the tics aren’t actually happening; you might say, hey, I notice you’re clearing your throat a lot, have you noticed that?’ without judgment.”

If a few prompts to stop the behavior don’t work, says Freeman, do your best to ignore it. Repeatedly drawing attention to your child’s tic, or scolding or punishing them for it, can exacerbate their anxiety and make the behavior occur even more.

The front line treatment for kids with tics are behavioral treatments that address the environmental conditions that contribute to the tics and give kids strategies for managing them, says Specht. Some of these strategies can be helpful whether or not your child’s repetitive behavior qualifies as a true tic.

“From a non-medical standpoint, the types of interventions for tics and these repetitive body-focused behaviors are very similar. On the diagnostic side, there is a difference, but on the behavioral side, we’re likely to use strategies that overlap quite a lot for these behaviors,” says Freeman.

These strategies include ways parents can support and motivate kids and strategies kids can use to manage their behaviors. A specialist can also help kids and families with the language to talk to other kids about what these movements are about, and to teachers about how to respond appropriately.

The strategies are often the easy part, says Specht, who is working on a DVD for parents of kids with tic disorders to guide them in working with their child. “The harder part, especially when the tics are more intense and complex, is getting a kid to do them, and that’s where a cognitive behavioral therapist can help.”

Fast forward 6 years. Heather’s son hadn’t shown repetitive behaviors in years. He was a happy, confident kid who turned out to have a drive for performing on stage. And then, around the time of the opening of a show that was to run all summer, he started twirling his hair again.

“This time, I stayed calm,” Heather recalls. She and her son came up with a micro-movement he could do every time he felt his hand start to rise to his hair. When on stage, he would make a circle with his thumb and pointer finger and rub those two finger tips together. “It was noticeable if you were looking for it, but it was such a subtle, tiny movement that it didn’t distract anyone.” And after a week or so, she said, he didn’t need to do it at all.

That kind of strategy might work for a child with mild behaviors, says Specht, who adds that while he generally encourages trying to substitute a less noticeable movement for the repetitive behavior, perhaps the most important thing is to help kids refocus their attention. “Kids who are having these repetitive behaviors are often perpetually distracted by somatosensory experiences, internal bodily sensations that are relieved by doing the behavior, which are kind of a brain glitch, if you will. We want to help kids get refocused on the most salient thing that’s going on — what’s happening in the classroom, or in this case, the action on stage — rather than responding to the distraction of the sensory experience. And reinforcing the positive outcome by saying, ‘Wow, that’s so great that you’re performing,’ rather than focusing on the repetitive behavior. This instills in the child that he is special not because he has tics, but because he doesn’t let them get in his way.”

To learn more about tics and tic disorders, visit tourette.org

Editor’s note:
Thank you to the readers who pointed out that the sudden onset of involuntary repetitive movements in children may be a symptom of PANDAS or PANS, two complex, related syndromes triggered by infection that disrupt neurologic functioning. This story has been revised to make it clear that if you’re concerned about sudden changes in your child’s behavior, your first step should be an appointment with their pediatrician. For more information about PANDAS/PANS, visit pandasnetwork.org or the Stanford PANS clinic at Stanford Children’s Health.