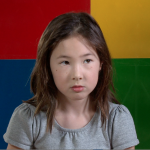 Advertisement
Parenting » Emotional smarts » Do you feel me? (monkey bars)

To feel or suffer bodily pain or mental pain or distress

The girl in the video also felt hurt because of something she was telling herself. Could she have interpreted her classmates’ actions in a way that might have left her feeling better?
Ask your child to rewrite or rethink the story with a different interpretation about the girl’s classmates.

Explore stories about feeling hurt in our feeling word book lists:
Watch more Do you feel me? videos and learn more about emotions.
Read more about the Feeling Words Curriculum.
Have some fun with feeling words with our Mad-Sad-Glad Libs.