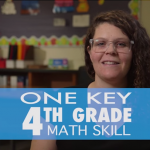 Here’s what Ms. Hatschek wants fourth graders to really master in math so they can be successful in fifth grade, algebra, and beyond.

Learn more about your fourth grader’s learning and development this year, including: