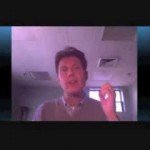 Madeline Levine
“Disagreement is tolerated. Disrespect is not,” says psychologist Madeline Levine. Here’s her advice on what to do when your child utters these dagger-to-the-heart words. Format: Video (1:04)

Erica Reischer
Is it time for a stern lecture or a time-out? Neither. Parent coach and psychologist Erica Reischer says by taking this approach, you’ll get beyond these three ugly words. Format: Video (1:42)