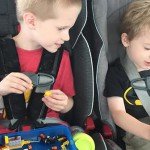 Waiting doesn't have to be synonymous with whining. Try these deceptively simple on-the-go games that sneak in skills your child needs in kindergarten.

When the Loper family embarked on a 22-day cross-country trip covering 8900 miles, 28 states, and eight national parks, their friends and family thought they were crazy. With 5-year-old Jack, 3-year-old Owen, and 20-month-old Madeline in tow, the trip involved at least 200 hours of car time. That’s a lot of sitting and waiting for kids who haven’t even started kindergarten yet.

So how’d they make it work?

A simple solution to a daily problem

Waiting is a fact of life. We spend almost an hour a day waiting — for appointments, in traffic, in check-out lines. For young kids, that can seem like an eternity. But spend that time playing games, like the Lopers, and you turn an otherwise boring wait into quality learning time. Why? Playing games is more than just a good way to keep kids busy and happy. It’s an opportunity for your young child to develop key skills. Games help children acquire competency in reasoning, language, and math. When kids strategize and problem-solve to play games, they also improve self-regulation — the ability to control their emotions and behavior, resist impulses, and exert self-control and discipline. So while you’re passing the time pleasantly rather than petulantly, you’re also helping your child practice skills they’ll need to adapt to — and thrive in — kindergarten.

To play: Using a pen and paper, make a grid of 10 dots across and 10 dots down for a total of 100 dots. (If that seems overwhelming to your preschooler, you can adjust the size of the grid.) Take turns connecting two dots horizontally or vertically. The player who closes a box puts their initial in the middle. The one with the most closed boxes marked with their initial at the end of the game is the winner.

The connection to kindergarten: Boosts fine motor skills as your preschooler practices drawing lines and writing their initials.

To play: With your hands behind your back, place a small item, like a coin, in one hand and hide it by making a fist. Without revealing where it is, show your child your fists and ask them to choose the hand hiding the coin. Tweak this game by holding your fists in different positions, like one above the table and the other below, or one in front of you and one behind, and asking your child, “Which hand — in front of behind?” After a few rounds, give your child the coin as a prize.

The connection to kindergarten: Teaches spatial awareness, foundational for math — and helpful for young kindergartners following new rules like standing behind the line or putting their backpack in front of the bookshelf.

To play: Pick a number, a color, a person, place, or thing. Then, like you’re playing Twenty Questions, prompt your child to ask questions to deduce what you’re thinking of. Guide your child along by giving hints, too.

The connection to kindergarten: By practicing complete questions and responses that are more than one-word answers, you’re helping them be kindergarten-ready communicators — expanding their vocabulary while giving them rudimentary grammar practice to boot.

Classics with a twist

This can be a lifesaver in a restaurant while waiting for your food to be served.

To play: Use straws to create a Tic Tac Toe board and sugar and sweetener packets as the X’s and O’s. This game may be more appropriate for older preschoolers who are ready to learn strategy and how to make choices. If your 3-year-old prefers to use the straws and sugar packets to create designs or practice counting, that’ll work, too. Ask your child to stack three yellow sweetener packets or make a row with four white sugars. The options are almost endless.

The connection to kindergarten: Recognizing and creating patterns helps with the development of counting, strategy, problem-solving, and algebraic thinking. Yes, algebra skills do start in kindergarten!

This sleight of hand game, which typically uses cups and a ball, can be adapted to the restaurant table with sugar packets and a coin.

To play: Make a row with three sugar packets. (Make sure they’re all the same color.) Hide a coin under one of the packets, then start to move them around in circles as quickly as you can. Once you stop, ask your child which packet the coin is hiding under. This game’s another chance to earn some cold, hard cash if you reward them with the coin at the end of the game.

The connection to kindergarten: Hiding games encourage children to use their imagination and help kids develop problem-solving skills.

To play: Keep a set of bingo cards (download free, age-appropriate bingo cards) and markers in the glove compartment of your car. Players can look for the numbers on license plates, street signs, billboards, or buildings.

Games to play on the fly

It’s hard to stand still while waiting in line, but games like tag and hide and seek may not be appropriate in a crowded waiting room or grocery store. When you must stay in one place, try thumb wrestling.

To play: Grasp hands with thumbs sticking up and without using any other fingers, try to be the first to pin your opponent’s thumb down for a count of three.

The connection to kindergarten: Boosts dexterity and fine motor skills.

To play: Challenge your child to pretend they’re a favorite character and to strike a pose that character would make, then see how long she can hold it. Freezing in one position can get pretty boring after a few seconds, but research shows that by adding the element of imagination, kids can hold still and stay focused much longer..

Your preschooler may not be ready to compete in the annual USA Rock Paper Scissors tournament, but a few rounds can make a wait bearable.

To play: On the count of three, each of you makes a rock (fist), paper (hand flat), or scissors (holding up the first two fingers with your hand tilted to the side to mimic cutting). Remember paper covers rock, rock breaks scissors, and scissors cut paper.

The connection to kindergarten: Encourages kids to memorize simple rules (like rock beats scissors), to strategize, and to practice motor skills.

There are plenty of preschooler-appropriate apps for your smartphone or iPad. Jack, Owen, and Madeline all enjoy Toca Boca apps. “They’re simple, safe, and usable,” Kris says. “Madeline can play most of them at 20 months, but Jack still loves them at 5.”

To play: Toca Boca games are designed for open-ended play and exploration. With 23 apps to choose from, preschoolers can prepare food in the Toca Kitchen, explore nature in Toca Nature, or use digital building blocks to create a new world with the six Toca builders.

The connection to kindergarten: Apps that allow open-ended play (meaning there are several possible outcomes rather than a single static ending to every game) teach children to use their imaginations to solve problems, which is a step toward self-reliance and independence.

Whether you’re in line, at the doctor’s office, or in the car, having these games on hand will transform waiting time into enjoyable memories together. Plus, you’ll stave off poor behavior and whining — at least for a while — while sneaking in key skills that will help prepare your child for kindergarten.