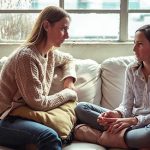 Is offering a safe ride home always a good idea? Should you come clean about your own drug history? Experts address parenting dilemmas.

Talking about intoxicants with your child is tough. There are facts you must communicate: damage to developing brains; harm to emotional, physical, and mental health; impaired judgment that can wreak havoc on a young life and turn driving deadly. But other questions arise, too, about what you choose to say — and how and when to say it. We turned to the experts for answers to five vexing questions parents are likely to face.