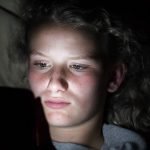 Does your teen have a digital curfew?

A new study finds devices at bedtime are cutting into teens’ much-needed sleep time and directly impacting their mental health.

A 2017 study published in the journal Child Development found that using smartphones late at night, specifically for social media, is directly linked to depression, poor coping skills, and reduced self-esteem in teens. In light of recent evidence that the time teens spend on their phones has negative effects on their wellbeing (including a survey that found 1 in 5 teens say they regularly wake up in the middle of the night to check social media), giving kids and teens a digital curfew — a designated time each night when all devices are turned off and kept out of reach — just makes sense, says Lynette Vernon, the study’s lead researcher at Murdoch University, Perth, Western Australia

According to the National Institutes of Health, teens need to clock between 9 and 10 hours of sleep a night because of their rapid physical and neurological growth. Teen sleep is further complicated by the fact that during puberty, circadian rhythms shift, a phenomenon called sleep phase delay. Essentially, adolescents don’t get tired until 10 or 11 at night, and they’re still in sleep mode at 8 am. (Which is why in 2014 the American Academy of Pediatrics recommended that middle and high schools start their day no earlier than 8:30 am to combat teen sleep deprivation.)

Anything that interferes with teens getting the sleep they need is going to impact their functioning, says Vernon. But when kids (or adults) bring their phones to bed with them, it creates kind of a perfect storm of sleep pathology. Time spent scrolling and liking is obviously time not spent sleeping, and the content itself is more likely to be stimulating than soporific. Then there’s the fact that the light from screens has been shown to affect melatonin production, interfering with the ability to fall asleep. Finally, teens have such an intense bond with their phones that the pull to engage with them is hard to resist.

“Phones store memories, so they become an important device for reinforcing teenagers’ narrative. Phones enable teens’ need to socialize with their peers. They get rewards from their phones, and they can experiment with online identities. Many of these activities are not unhealthy in themselves, but if teenagers can engage in all of these activities in the privacy of their bedroom when they are supposed to be sleeping, then phones in the bedrooms can be a temptation that leads to difficulties in daytime functioning,” Vernon says.

“But my phone is my alarm clock!”

While there are lots of things you can do to help your teen get more sleep, Vernon says, a digital curfew may be the single most important thing you can do for your teen’s physical and mental health. Ideally, this curfew is best instituted when your child first gets a smartphone. If your teen is already accustomed to having devices in her bedroom at night, a digital curfew is likely to be a tough sell. But for some kids, a parent-enforced digital curfew may come as a relief, says Lisa Medoff, a clinical psychologist specializing in adolescent development and a professor of human biology at Stanford University.

“The earlier you do it the easier it is, but it’s never too late,” she says. “It’s an issue that affects their health, and it’s ok to step in at any point and say ‘What we’ve been doing so far hasn’t been working. You’ve been having trouble getting up in the morning, I see that it’s affecting your mood, and we need to make some changes.’” (And for the kids who will inevitably play the alarm clock card, for about $10 you can get them an alarm clock that is not also a smartphone.)

A digital curfew isn’t an attempt to sever your child’s connection to friends, information, and the wider world. It’s more like the modern equivalent of “lights out.” And while you’re at it, instead of checking your own phone just one last time before bed, think about giving yourself a digital curfew, too. Or instituting a family rule whereby all devices charge overnight in the kitchen, for example.

“Adolescents are very attuned to adults being hypocritical,” says Medoff. “Especially when you’re trying to talk to kids about taking care of their physical and mental health, it’s important for them to see parents modeling that.”

What are screens doing to your child’s brain? Listen in as Like a Sponge, GreatSchools’ podcast for parents on the science of learning, investigates how digital distraction affect kids—and their parents.