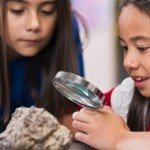 Your fifth grader and science

Fifth graders get an up-close view of animal and plant life by examining the structure of cells.

What science topics will my fifth grader learn?

In fifth grade, students explore life science, earth science, and physical science. Through hands-on investigations, they try out the kind of work that professional scientists do, helping them understand the foundations of science and inspire curiosity about the subject. Fifth-grade classes sometimes supplement classroom work by visiting science museums and observatories or taking trips to the ocean.

Life science is the study of the structure and behavior of living organisms. Expect students in fifth grade to examine cells under a microscope and learn to identify the different parts of the cell, including the cell membrane and nucleus. Children should also learn about the systems of the body and how they work together. They might be asked to draw life-size human figures, labeling the organs inside.

Fifth-grade teachers should introduce the concept of ecosystems — and the interdependence of animals and plants within them. Many students do population counts of a designated area, making a list of the plants and animals living there. Another common fifth-grade science project involves diagramming the energy flow in a food web, identifying the producers, decomposers, consumers, predators, and prey. Finally, students learn about the five major kingdoms (plants, animals, fungi, protists, and monerans) and should be able to describe and cite examples from each kingdom.

Fifth-graders continue to study the earth, learning about the water cycle and the role of evaporation, precipitation, and condensation. Science students at this level should understand the solar system consists of planets and other bodies that orbit the sun in predictable paths, learning about the earth’s layers and its changing surface. They might also make a model of the earth with different colors of clay that correspond to the crust, mantle, inner core, and outer core. Expect your child to be able to describe how rocks and fossils reveal evidence of a volcanic eruption or plate movement.

Physical science is the study of energy and matter. Expect students to learn about the three distinct states of matter: solid, liquid, and gas. Fifth-grade scientists should learn that matter is made up of elements. They should also begin to become familiar with the periodic table, using the periodic table to name and interpret the different chemical elements, looking at different forms of energy — how they can be converted into heat energy. By investigating force, the exertion of push and pull on different objects, they may observe and record data on the rate different objects of varying sizes fall.

Learning what scientists do

Your child will learn to conduct scientific experiments and investigations. She should have many opportunities to practice using science process skills, sometimes referred to as investigation or inquiry skills.

As Fred Stein, our science curriculum consultant, explains: “In fifth grade, students are better able to understand that there can be many possible explanations for a situation, and can debate the merits of explanations based on the evidence.”

According to the National Science Education Standards, students in grades 5-8 should be encouraged to:

Your child may take a state-level science test at the end of fifth grade. To see if your state releases its test questions, search your state department of education’s website.