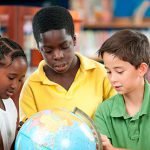 Inside the 4th grader’s brain

What insights can neuroscience offer parents about the mind of a fourth grader?

Friendships often emerge as extremely important in fourth graders, an alarming trend if it’s accompanied by peer group pressure, cliques, bullying, and fierce jockeying for popularity. The slow slippage of influence away from parents toward peers can concern moms and dads, who fear adolescent rebellion is arriving too early.

Are you one of the worriers? Here’s comfort for you: The friendship-fixated behavior of your fourth grader is absolutely normal. A fourth grader’s brain has developed a unique "self" at this age, with one-of-a-kind thinking patterns based on individualized neural pathways. You gave love, guidance, nutrition, exercise, education, and enriching experiences, which your child utilized to create dendrites, axons, synapses, and myelin – you were the primary "gardener" of your child’s brain! But now, your child might need close peers of the same age for bonding, giggling, secrets, and commiseration.

You’re still of preeminent importance, but your guidance will be wiser if you understand what’s happening inside your child’s sometimes complicated and often funny noggin. Here are some tips about your child’s evolving brain and how you can best help:

Use encouragement and positive discipline to shepherd and protect your fourth grader, instead of punishment to make your child feel bad. At Leiden University in The Netherlands, researchers using MRI scanners discovered that the basal ganglia — clusters of brain cells at the brain’s base that are affiliated with movement – of nine year olds "responded strongly" to positive feedback. Conversely, when they received harsher, negative feedback, the cognitive control areas scarcely responded at all. That’s why kids this age often get that "blank look" when scolded.

Researchers at Indiana University School of Medicine in Indianapolis used MRI to view brain regions that were stimulated when kids played a variety of video games. When the study subjects played "Need for Speed: Underground" — a non-violent game — activity in the frontal area was observed; this zone is associated with concentration, self-control and inhibition. However, when kids played "Medal of Honor: Frontline" — a violent game — there was no frontal area activity; instead, the "reptilian brain" amygdala was excited. The amygdala is associated with emotional arousal — especially anger — and is responsible for aggressive, impulsive behaviors. Repeated "firing up" of reptilian zones could "hardwire" a developing brain for less self-control and more violence. So if your child wants to play video games, steer him to ones that focus on racing or skill, not blowing holes in other sentient beings.

Growth in the fourth grader’s prefrontal cortex is accelerating as the brain prepares for adolescent changes. Yikes! Your child might be sliding into puberty already, especially if she’s a girl. Don’t delay! Inform your child now about the physical and emotional changes of puberty. Preadolescents might want a private, secret area in a locked box or drawer. Need for "personal space" also includes a desire for more independence, with less adult guidance.

Boys and girls at this age are often quite hostile to each other. This rudeness has a neurological excuse. A National Institute of Health study recently revealed via MRI scanners that girl and boy brains at this age are wildly dissimilar in the structure of their cerebral cortexes. As they move through adolescence, their brains grow more and more alike, and they become, as parents fear, much, much friendlier with the opposite sex.

Many fourth graders want to devour unhealthy "junk food." They’ll beg for it, but don’t cave in to their craving for sugary and salty substances. Feed your child a balance of vegetables, fruit, whole grains, dairy and meat. Why? Children need a wide variety of nutrients for optimal brain growth. Egg yolk, fatty meat, and soybeans contain choline, the building block for the neurotransmitter acetylocholine, which is crucial in memory function, are all ideal brain foods. (Learn about four terrific brain foods kids will love.)

Fourth graders have stronger interconnectedness in their brain architecture and improved abilities in planning, problem solving, information processing, and long-term memory than younger kids. This upgrade enables them to realize that authority figures are not always "right" — an important epiphany, but it doesn’t make parenting easier. When you set rules, make them clear and stick to them, and carefully explain your reasons. Talk about "respect" and what your expectations are as a parent. Involve your child in household chores and teach them that they are old enough now to be responsible for their actions.

Frontal lobes in fourth graders have developed to the point where they have more impulse control and a better grip on their anger. Encourage your child to advance in emotional maturity by choosing healthy habits and steering your child towards healthy friendships that enhance their ethical values. Don’t forget: Your fourth grader’s brain is still blooming and the experiences you expose her to remain the most valuable ingredients in changing, and improving, your child’s impressionable mind.