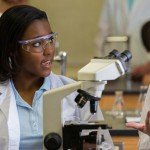 Your high schooler and science

Science isn’t just a body of knowledge — it’s a way of acquiring scientific concepts and principles, and the best high school programs get students interested in investigating the world around them. As teens learn facts and vocabulary, they develop the ability to ask scientific questions, plan experiments to answer these questions, and develop reasonable explanations based on their observations.

Science standards vary widely from state to state and school to school, but the thinking skills taught by science are universal. The topics below are examples taken from several states and therefore merely guidelines. To see how your child’s schoolwork compares, check out your state’s science standards.

Is your teen studying the right stuff?

It’s not all test tubes: Science teaches analytical thinking, creative problem-solving, and logic. Whatever their plans, graduating high school seniors should have a solid grasp of science and its relevance in their lives.

The makers of the nation’s two college admissions tests have specific recommendations for the science courses needed to prepare students for college. The College Board recommends the following coursework:

ACT recommends three or more years of laboratory science, as do most competitive universities

The National Science Education Standards, voluntary guidelines established in the late 1990s, form the basis of many state standards. In general, the topics your student could be studying in high school fall into these key areas:

In physics, high school students continue their explorations into the interaction of matter and energy, studying force, motion, momentum, electricity, and magnetism.

Students should transition from basic to sophisticated mathematical calculations, while solving problems related to speed, velocity, acceleration, and force.

Teens will study and work with various forms of energy, including electrical, chemical, light, sound, and thermal energy. Teens might study the properties of mechanical and electromagnetic waves — and experiment with both sound and light waves. Parents can expect students taking physics to learn about subatomic particles, fission, fusion, and nuclear energy.

And in the lab, teens work to explore chemical stability, chemical compounds, and chemical and physical changes of matter. They’ll study the different phases of matter, how structure changes, and the natural laws associated with this change.

High school biology students often conduct experiments in both the lab and the field, which helps to develop their understanding of living things — cell structure, systems, and ecosystems, and the genetics of organisms. More specifically, students look at cell theory, the concept of cells as the fundamental units of living things.

Students learn about biochemical reactions involving pH, temperature, and energy conversion processes like photosynthesis. They’ll study the functions of proteins, carbohydrates, and fats in the human body and should be able to demonstrate their understanding of the way energy flows through ecosystems by creating food chains and energy pyramids.

Teen biologists may examine the molecular foundations of heredity, using their knowledge of DNA, RNA, genes, and chromosomes to aid in their investigations. By studying the process of formation and growth of organisms, how genetics and environment play a role in a species’ survival, teens also study relationships between organisms and their environments, including how human activities affect the natural processes of the earth.

In these subjects, high school students examine the earth’s physical characteristics. Earth science includes the study of astronomy, the atmosphere, and geology. Expect teens to explore the classification of stars, the expansion of the universe, and the role of technology and computer modeling in shaping our understanding of the universe. Earth and space science also includes lessons on the physical structure of the earth — plate tectonics, rocks, as well as geology, fossil evidence of environmental conditions, and estimations about the age of the Earth. Earth and space science includes the movement of water on the Earth’s surface, from creeks to rivers to oceans, the manipulation of water flow, and the circulation of currents.

High-schoolers get exposure to a science topic with special relevance to current events: climate change. Students start with lessons about the atmosphere and predicting weather patterns, but parents can expect their teens to study the way human activities impact the atmosphere — and what they can do about it.

In 2005 the National Research Council issued “America’s Lab Report,” a study that found that students’ experiences in the lab were not closely connected to classroom science lessons and that the quality of those experiences was “poor for most students.”

The report found that teachers and lab manuals focus on “procedures to be followed, leaving students uncertain about what they are supposed to learn… Typical laboratory experiences rarely incorporate ongoing reflection and discussion among the teacher and students.” The report cites, among other causes, a lack of preparation and support for teachers, disparities in the quality and quantity of equipment, and a lack of agreement on the goals of the lab experience.

How do you find out where your child’s high school science instruction stands? The American Association for the Advancement of Science has developed 10 questions parents can ask regarding science instruction in their children’s school. If you find your student’s science education needs bolstering, there are many programs you can explore to help them obtain adequate experience and knowledge.

To study science is to study the world: As teenagers develop their scientific skills, it’s likely they’ll learn to ask the right questions, investigate answers, and communicate results. The scientific concepts students learn in high school can not only help them learn higher-level science but also teach them the fundamentals of creative problem-solving that will apply to all areas of their life.