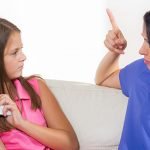 Advertisement
Parenting » Dilemmas, Emotional smarts » Gabor Mate on “You’re not the boss of me!”

Gabor Mate on “You’re not the boss of me!”

A statement like this, says the best-selling co-author of Hold On to Your Kids, suggests there's a disconnect between parent and child that needs mending.

Canadian physician and co-author of Hold On to Your Kids Gabor Maté says this isn’t about how to respond to such an impudent comment from your child. A parent must look much deeper at the relationship with the child, and ask why there is such a rift:

“In any relationship between an immature creature and a mature creature, and the mature one is taking care of the immature one, there needs to be a hierarchy. You have to dominate your children. When I say ‘dominate,’ I don’t mean to be authoritarian. I don’t mean to be exploitative or abusive. I mean you have to be in charge. You can’t let a 1-year-old decide to go outside and play naked in the snow when it’s three degrees below zero. You can’t do that. You have to dominate the child. You say, ‘No, you’re not going outside.’

“Hierarchy is automatic in nature. No baby bear says to Mother Bear, ‘You’re not the boss of me.’ That doesn’t happen. Hierarchy is implied in any caretaking relationship between a mature and an immature creature. Now, when a child is repeatedly challenging that hierarchy, it means they’ve become disconnected from the parent. It usually means that they’ve become too connected to their peers. And that means they’re actually looking at their peer group now for their values and their how-to-be and how-to-walk and how-to-talk. And it seems unnatural to them that their parents should be telling them what to do. The problem is not in the statement. [‘You’re not the boss of me.’] The problem is in what it implies, which is, ‘I’ve become disconnected to you, and I no longer accept the natural hierarchy between us.’

“The solution, then, is not to be authoritarian and force the kid. The solution is to actually investigate: ‘What happened to the relationship? How come the kid is disconnected? Why isn’t he looking to us for a sense of direction and values and how he ought to be? What’s happened?’ It usually means that the parents have been too stressed, too distracted, and the child has found other attachments, usually in a peer group. It’s not a simple question of, ‘Here’s what you say.’ It’s more — going back to what Krishnamurti said — ‘understanding the relationship.’ Because without understanding the relationship, ‘any plan of action will only breed conflict.’ There are always deeper issues behind these questions and statements.”

Richard Weissbourd
The Parents We Mean to Be author and Harvard psychologist Richard Weissbourd advises parents to use this comment as a moment to step back and reconsider what’s gone amiss.
Format: Video (0:59)

Bruce Feiler
The Secrets of Happy Families author Bruce Feiler offers this magic bullet to avoid confrontation over this childish quip — a solution that makes everybody happy.
Format: Video (1:36)

Adele Faber
Adele Faber, co-author of How to Talk So Kids Will Listen & Listen So Kids Will Talk, offers an approach for mutual problem solving, even with young kids. Format: Article

Betsy Brown Braun
“In 10 years, when you can drive your own car and pay your bills, then you don’t have to listen to a word I say,” says child expert Betsy Brown Braun. But for now…Format: Article