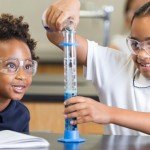 Your second grader and science

Second graders study the states of matter and how they transform through heating and cooling.

What science concepts will my second grader learn?

What types of science instruction will my second grader get?

Second-grade teachers typically teach students to do experiments and record observations, both orally and in writing. Along with experimentation, books are also incorporated to encourage coherence and order to a child’s scientific learning. A second-grade teacher might conduct an experiment that demonstrates how light travels in a straight line. A teacher might use magnets to illustrate magnetic fields and poles, and show how they are used in compasses to show direction.

Getting acquainted with the physical world

Parents can expect their second-grade scientists to learn about the physical world. To understand that air actually has a weight, they might compare the weights of a full and empty balloon on a balance. Likewise, a teacher might introduce life cycles by setting up an area where students watch caterpillars spin cocoons and become butterflies.

More important than scientific facts at this stage is children’s ability to observe, ask questions, plan and do investigations, and record and communicate what they experience. The teacher might encourage students to investigate the circulatory system by asking them to put their hands on their chests to feel their heartbeats, comparing their heartbeat rates before and after exercise. Or a second grader might identify metamorphosis and various stages of life by observing tadpoles as they turn into frogs.

“In second grade, students tend to be more socially adept, and can be expected to work cooperatively in groups on planning, doing and reporting their science investigations,” says Fred Stein, our science curriculum consultant.