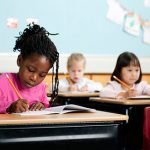 Inside the 2nd grader’s brain

What insights can neuroscience offer parents about the mind of a second grader?

"What happens if we’re late, Daddy? Will something bad happen? I don’t wanna’ be late!"

Second graders have a propensity to worry. They can fret about nightmares, the dark, their clothes, their homework, or their stomach aches that might — in their agitated minds — be a lethal disease. They hate making mistakes, not finishing tasks, and especially losing. They have to be first, correct, punctual, best, and perfect. What’s wrong with these little nut-cases? Are they blooming neurotics? Hypochondriac loons?

No, they’re not. Morose sensitivity in this age group is actually proof that their brain is developing properly. Seven-year-olds can finally grasp concepts like space, direction, distance, and time. They now understand that the clock is ticking forward. Suddenly, schedules, routines, calendars, plans, predictability, rules, justice, and assignments become excruciatingly serious causes for concern.

Neurologically, what’s buzzing and building inside the second grade brain? Jane Healy, author of Your Child’s Growing Mind, has defined them as "avid learning machines." Marguerite Kelly, Washington Post family columnist, labeled second grade as "the age of reason" touched with a "patina of sadness." Here are ways to help your second grader advance gracefully through this complex cognitive stage.

Your second grader will thrive best with a teacher who has high standards for her students. According to professor of psychiatry at UCLA School of Medicine Daniel Siegel teachers’ expectations of students’ abilities have a huge effect on student learning. In one study, teachers were mistakenly told that some of their students who had been previously identified as learning disabled were in fact gifted. After the teachers raised expectations, the students performed up to expectations. Children this age often develop affectionate relationships with their teacher; it’s not uncommon for them to weep when the year ends.

Dopamine levels are ascending in the second grader’s brain. This neurotransmitter — which enables attention and motivation — increases its output when goals are attained. Your second grader will be ecstatically mind-enhanced if you help her carefully set, chart, and successfully reach her intellectual and physical ambitions.

Reading fluency improves, aided by expansion of Broca’s area and Wernicke’s area, and the massive interconnection of neurons. Second graders might start reading because "they want to." Parents can help elevate their child’s language ability if they ask thought-provoking questions and talk to them with a high-level vocabulary.

Second graders need to feel safe, stable, and emotionally secure for their brains to acquire maximum knowledge. Chronic traumatic stress has to be avoided — it can release toxic amounts of cortisol that destroy brain cells, especially in the hippocampus region. To protect a second grader’s confidence, parents and other important adults should give loving, encouraging feedback, minimize scolding and threats, and avoid shouting or spanking for discipline.

Try scheduling at least 30 minutes a day for your second grader grader to run and play. They’re ready for bicycling, and sports programs like soccer, swimming, hockey, and martial arts are outstanding brain-boosters. Old-fashioned school yard games — tag, double dutch and capture the flag — may be the very best exercise for young kids because they teach intense social and physical skills at the same time. Many seven year olds thrive with a physical challenge because their energetic, integrated sensory systems enable them to progress far quicker than adults in skills like skating and skiing. According to John Ratey MD, author of Spark, exercise elevates a brain-building chemical Ratey dubs "Miracle-Gro for the brain" because it builds the brain’s infrastructure. Abundant research suggests that students who exercise intensely perform better academically than those who do not.

A second grader’s attention span ranges from seven to 25 minutes; boys usually at the shorter end of the range than girls. To encourage greater concentration capacity, encourage activities like meditation and board games — and limit TV. Studies indicate TV over-stimulates still-developing neurology, resulting in abbreviated attention. Why? Some scientists say TV viewing wastefully releases high quantities of the neurotransmitter dopamine, a key regulator for focus.

Is your second grader demanding more freedom? Itching for a longer leash? That’s good! This means your child is developmentally on course. Synaptic density in the frontal lobes is peaking this year, with neural pathways linking those zones to the limbic system. The result: Your child’s rational brain areas are expanding in power and assuming more control over their wilder regions, which translates into improved impulse control, greater independence, and a better capacity to plan ahead. Helpful tip: Time to get your bigger brained second grader helping out more at home. Second graders can grasp orders that contain three separate components, which enable them to perform more complex chores.

Har, har. Finally your kid understands your sense of humor. By age 7, the Broca’s area growth is larger in the right hemisphere. This beefs up language’s emotional and prosodic components. Your child’s comprehension is no longer limited to the "literal" which means that sarcasm and irony are within their grasp. The upside: They’ll just chuckle instead of freak out when you mutter, "I’m gonna sell you to the pirates." The downside: They might start turning sarcasm back on you, with requisite eye-rolling: "Really nice tie, Dad."

The memory capacity of your second grader is improving, due to dentritic complexity in the frontal and temporal lobes, which are growing at a stunning rate. Newly-gained "coherence" allows the brain to integrate the past with the present. Now that she has a deepening awareness of her own emotions and her "inner self," you can suggest she start keeping a journal or scrap book.

Expose your second grader to music. If he demonstrates an interest, get him an instrument. Play structured melodic music for him and sing songs. The journal Neurological Research published a study indicating that second graders given four months of piano training scored 27 percent higher on fraction tests than children who used math software. Another study, in the same journal, indicated 100 percent improvement over students who learned in the conventional manner.

The Developing Brain: Birth to Age Eight, by Marilee Sprenger

Seven Times Smarter: 50 Activities, Games, and Projects to Develop the Seven Intelligences of Your Child, by Laurel J. Schmidt