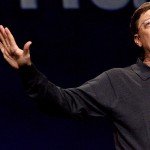 Should your kids aspire to these rock stars?

Short and sweet, this film is an inspirational valentine to why all kids should learn to code.

This film from code.org doesn’t deliver on its name because it isn’t really about what schools do or do not teach. We covered that prickly pear in our recent story about how coding should be the second language all schools should teach but sadly don’t.

Still, it does deliver: it’s a valentine to computer programming. As seductive and sweet as any heart-shaped box of chocolates, the short film captures some of the most illustrious and industrious titans of tech talking about their love affair with the bits of code that fueled their success. There’s Gates talking about how he first used programming to find out where girls would be sitting in his classes. Or Drew Houston of Dropbox explaining that because there’s such a demand for great programmers, they live “charmed lives”— cue to a montage of the most swank corporate perks: 4-star cafeteria cuisine, ping pong tables, glass practice rooms for rock bands, and chic modern couches for lounging with your laptop. The film goes hand in hand with a great blog by the founders of code.org about how 90 percent of schools don’t teach computer programming.

As a code-free humanoid, I watched this video with two parts envy and one part incredulity. Really? Is this really where the future is being cobbled together one > at a time? One thing’s for certain: I— the parent who pushes non-digital books, bans video games, and encourages tactile learning like sour dough bread baking (yeah, yeah a wannabe Waldorf mom) — will be showing this film to my two daughters tonight. Neither have ever considered becoming a programmer, though they’ve floated everything from knitter, calligrapher, martial artist, rock collector, historian of the underground railroad, founder of a child-only restaurant chain, and baby eye surgeon, but never ever “just” a programmer.

But maybe that needs to change. One thing that is so powerful about this video is the way it dispells myths: you have to be a genius to program, that it’s boring and uncreative, that it has nothing to do with humanity. Vanessa Hurst, cofounder of Girl Develop IT, put it best: “If someone had really told me that software was really about humanity, was really about helping people by using computer technology, it would have changed my outlook a lot earlier.”

This is definitely something my kids need to see. What about yours? Are your kids already anointed in the cult of programming, or do they still think it’s only something techie types like to do?