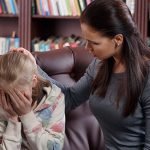 The therapist's words, Your daughter is deeply depressed, flooded one mother with heartbreak and anxiety. But it was a wake-up call that transformed her relationship with her daughter with LD.

“Your daughter is deeply depressed,” said the therapist.

The words flooded me with heartbreak and anxiety. And yet, 10-year-old Catherine had ADHD and learning disabilities and was behind most children her age in developing social and thinking skills. She had endured social rejection from other kids and their taunts that she was “stupid.” (She’s not; her IQ is above average.) Although she had been in a school program for kids with LD, the teachers there hadn’t been effective in helping her handle peer difficulties. How could Catherine not be depressed?

But peers weren’t the big problem, the therapist told me. The main feelings Catherine revealed in several months of play therapy were about me. So we spent the hour examining how Catherine and I interacted. I knew she had become increasingly defiant and moody at home, but I thought that was normal for kids with ADHD and LD. I didn’ t realize how large a part I might be playing in the problem.

As we talked, I saw that I had been increasing my demands on Catherine in her weaker areas, the ones where I saw her as being farthest behind the norm: organization, neatness, and personal appearance. And even though my intentions were good — to improve her skills in those areas — the result was that Catherine was feeling unaccepted, even unloved.

What could I do to change things? The therapist suggested I try thinking of Catherine as being a few years younger than she is. She also helped me recognize that Catherine is doing the best she can (and often actually does quite a good job). Then she suggested some specific strategies I could use to show my acceptance. Here are the ones that worked best:

Within three months, Catherine and I had settled into a much better relationship, and the therapist felt she was ready to leave therapy. We still have our difficulties, of course — I don’t use these strategies perfectly, and they don’t always work. But overall, life has become calmer and happier for the whole family. And she even keeps her room neater!