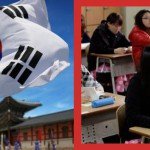 Should South Korean schools point the way to American reforms?

Last year President Barack Obama touted hardworking South Korean schools as a role model for our education system. “Our children spend over a month less in school than children in South Korea,” he told the U.S. Hispanic Chamber of Commerce. “That is no way to prepare them for a 21st-century economy.” If Obama’s point that U.S. students need to study more had many nodding in agreement, choosing South Korea as a benchmark for excellence in education had others scratching their heads.

Today South Korea is often regarded, along with Finland, as one of the two premier K-12 education systems in the world — in no small part due to the spectacular academic performance of its students. According to a 2006 survey by the Programme for International Student Assessment (PISA), which evaluates the scholastic performance of 15-year-olds in 57 nations every three years, South Koreans rank first in reading, third in math (tied with Hong Kong), and 10th in science (tied with Liechtenstein). More than 97% of South Koreans graduate from high school, the highest graduation rate in the world. Finally, some 100,000 South Koreans now attend U.S. universities — third overall just behind China and India — despite having a population that is less than 1/20th of those nations.

Should the United States emulate South Korea by vastly increasing the number of school days and adopting its other educational practices? If higher test scores and graduation rates are the goal, the logical answer would be yes. After all, the United States’ position in the PISA surveys is always far below average, seldom cracking the top 20 list. Yet a deeper look at the South Korean model suggests that its success comes at a price.

South Koreans attend school 220 days per year, almost two months more than the 180 days of Americans. (The Japanese enroll an astonishing 243 days per annum; South Korea abdicated first place in 2005 when its students ceased going to school half days on Saturday.) What distinguishes South Koreans from everyone else, however, is the immense number of hours they study outside the classroom. High schoolers, and even middle schoolers, in South Korea are often engaged in scholastics until midnight or 2 a.m. After taking classes in up to 11 subjects, they attend private academies called “hagwons” where they obtain supplemental learning. The bottom line? Most South Korean children spend 13 hours a day or more with their bottoms glued to a chair.

Although these grueling schedules help South Korea’s high test scores, the nation is remarkably inefficient at another PISA criterion known as “study effectiveness.” When PISA calculates each nation’s achievement based on the number of hours spent studying, South Koreans rank only 24th out of 30 developed nations. The winner in study effectiveness is Finland, the world’s true PISA champ, placing first in science, second in math, and second in reading. Finnish students only attend school 190 days per year (two weeks more than U.S. children) and receive less than a half-hour of homework per day.

Testing taken to its logical extreme

In the face of high expectations and high-stakes grading, South Korean teens don’t enjoy what many would consider a healthy balance of school, play, and sleep. So-called enrichments such as sports and arts are at a low premium, with many high schools lacking modern gymnasiums or sports teams. Supporting student social life is also a low priority compared to U.S. schools. A New York Times article about one of the nation’s most competitive high schools describes a teacher scolding two teens for holding hands. Finally, discipline in schools is meted out with canings by teachers for everything from disobedience to low test scores.

Even basics like sleep get short shrift during testing season. Blogger Rob Ouwehand, an English teacher living in Seoul, observed that South Korean high school seniors often sleep only four hours per night for several months leading up to the college entrance exams, thereby adhering to the popular maxim “Sleep five hours and fail, sleep four hours and pass.” (For a glimpse of the culture of the all-powerful college entrance exams, in which road and air traffic is rerouted to eliminate distractions and police chauffeur students to their exams, sirens blaring, check out this video.)

Relentless pressure and long hours, followed by tests that are regarded as the marker of all future success, produce unintended, and sometimes tragic, results. Many South Korean kids are alarmingly unready for university work. The Korea Times reported that Samuel Kim, a Columbia University scholar, assembled research revealing that 44% of South Korean students at top U.S. universities drop out. This digit exceeds the dropout rate for students from the United States (34%), China (25%), and India (21.5%). A principal reason for the lack of success is that the rote learning in Korean schools does not prepare students for the creative, active, and self-motivated form of learning U.S. universities require.

The system takes a profound emotional toll as well. South Korea’s student suicide rate is among the world’s highest, with 17 out of 100,000 students killing themselves — sometimes after a poor performance on entrance exams or because children cannot endure their parent’s disappointment. One 2008 poll indicated that 58.8% of students contemplate suicide.

Should we use South Korea as an object lesson in excellence or how a culture of high-stakes testing can go too far? Either way, South Korean schools do deserve recognition for their innovative use of technology. In 2001 the country became the first to provide high-speed Internet access to every primary, middle, and high school.

Presently, South Korea is aiming for two high-tech goals: By 2013, “flexbooks,” or digital textbooks, will be given to every student — these 3-D learning tools are easy to update with links to online articles and visual and audio material, and they’ll lighten backpacks that have been weighed down with heavy outdated textbooks. Robots for kindergarten are also due in 2013. IROBI will be a teaching assistant and a convenient “friend” who can register students, converse, sing songs, take photos, read stories aloud, and show films on its belly that has a seven-inch screen. Though U.S. teacher unions might reasonably object to a non-human teacher entering the labor market, no doubt many educators would welcome a professional stapler and housekeeper to help them with their endless classroom chores.