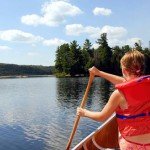 One parent's harrowing tale of a camping idyll gone awry.

Shadows flashed down the darkened hill. My 9-year-old daughter. Running. Crying. In the background disco anthems throbbed through the pine forest. A mirrored ball splashed colors onto branches.

The culminating dance on the last night of sleepaway camp should have been a time of gleeful abandon. Instead, there was my child: wild-eyed, blotchy with tears, and screaming for her parents. Scenes from Summer Camp Nightmare, Friday the 13th, Camp Slaughter, and Cabin Fever played across my mind’s eye. What the hell was going on?

Fortunately for my daughter, we were there. My husband, Hank, had volunteered as a “cabin dad” at this all-volunteer camp, and I had arrived the night before to participate in the family activities. So when my daughter overheard her cabin mom tell another counselor that “sometimes I just want to kill Tallulah,” she had someone to run to.

More than an idle threat?

Hearing the story, my husband saw red. He dragged the camp director and the woman outside.

“Did you actually say you wanted to kill my daughter?”

“Actually, I said it twice,” the woman sniffed. “I don’t think there was anything wrong with it.”

D— wasn’t your average camp counselor. A plastic surgery casualty sporting a baby tee and spray-painted-on pants, this sixtysomething teenile fashion plate had neither children of her own nor experience caring for them. She’d been involved in fundraising for the nonprofit camp, then volunteered to be a counselor. As I arrived on the scene, my daughter ran to me sobbing and trembling. By the woman’s own admission, my daughter hadn’t done anything to deserve such enmity: D— just found my slightly immature but never-a-troublemaker child “irritating.”

Now it was my turn to feel my blood rising, but I didn’t know what to do. Should we call the police? The woman who had been given charge of my child for a week was scary, but was she violent? Should we take the high road? And how do you communicate intelligently with an adult who has just threatened to kill your kid?

The director, a techie by trade who organized the summer camp to teach humanist ethics, confessed to being out of her league. She hemmed and hawed, her language skills regressing: “I don’t want to say ‘Hank bad, D— good’ or ‘D— bad, Hank good.'”

After offering a thinly disguised apology, D— excused herself and returned to gyrating on the dance floor. Once she was out of earshot, the director said to me: “She’s a multimillionaire. I don’t want to make her angry since I was hoping to hit her up for a big donation next year.” I gaped at the ethics teacher, dumbfounded. Apparently “conflict of interest” didn’t figure in her curriculum.

Every year some 11 million kids go off to some 12,000 summer camps in the United States to experience the ecstasy of nature, instant friendship, and lanyards. Many of them do, but some of them experience something else — traumatic emotional abuse, physical dangers, and weird cultish rules. Standing in the dark, I considered what might have happened had our daughter experienced this alone. Would she have told anyone? Would she have been scared enough to run away? Though we felt powerless when faced with a counselor who thought it was OK to utter death threats about her campers and a camp director who didn’t want this niggling fact to get in the way of her capital campaign, our only real power was the ability to comfort our daughter. Once Tallulah saw we took the situation seriously, she begged to return to the dance and her new friends.

Yet under normal circumstances, when things go wrong at camp, parents are not within earshot. At best, they find out later. In an incident that spurred new legislation in Michigan, one counselor at a camp repeatedly shocked campers with a stun gun. Fearing reprisal, the children did not initially report the incident.

Sometimes parents only get the news when it’s far too late. In 2005 Anat Gottesman got a call that her 4-year-old son Yoni had drowned at an elite summer camp at Cathedral Oaks Athletic Club in Santa Barbara, Calif. Despite the high price tag and prestigious address, Cathedral Oaks isn’t licensed or accredited, hardly an anomaly in the world of summer camps. As Gottsman discovered, there is no federal regulation for summer camps. Rules vary widely from state to state, with 8 states not requiring camps to be licensed and some 32 not requiring criminal background checks. Finally, only about one in four U.S. camps are accredited by the American Camp Association, according to its 300 health and safety standards.

The website of an attorney who defends summer camps in wrongful death and injury cases offers a sobering glimpse of camp catastrophes. “Whether a negligence claim is related to a lake drowning, an animal attack, a fall, a broken bone or anything else, we are here to stand by your side,” reads the Hertz Schram site.

Drowning, torture, and death threats may be rare, but what about broken bones and lesser injuries? Evidence is mixed. According to one 2009 study (pdf) published in Injury Prevention (grain of salt: it was sponsored by the American Camp Association), sleepaway camps have a rate of injury comparable with other summertime activities. On the other hand, a 2009 CBS report on injuries at a boys summer camp found that nearly all 300 campers ended up at the infirmary sometime during the week.

The crux is that camp is largely conceived as a place to let kids experience a little more freedom and, with that, more risk as well. Factor in human error — strike that — adolescent error, since most camp counselors are teens and very young adults, and it’s not surprising that sometimes things go woefully wrong. What is surprising is that our profoundly risk-averse society hasn’t taken more measures to mitigate the potential dangers of sending kids en masse into the woods to be supervised by strangers.

In the weeks after the incident, I fumed, stewed, and wondered where I’d gone wrong. Why hadn’t I done my research to uncover this camp’s backward priorities? Because I have a bias, I realized. The very idea of summer camp is so refulgent with ripe blackberries and wholesome sing-alongs, I find it hard to imagine a dark side. Unlike schools, which carry a neutral charge in my mind, the utopian summer camp casts no shadow. Of course, this idyllic image lives on partly because it holds a kernel of truth, but like any stereotype, it can interfere with thinking clearly.

Screening can save your sanity

So what can a parent do without becoming a paranoid security freak or — worse yet — following her child to summer camp? Check out this slide show of seven questions to ask a camp before sending your child there.