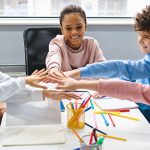 Character education: as important as academics?

No longer afraid of teaching values, many schools have added character education to their lesson plans.

For years parents and teachers discussed whether or not to teach values in schools. That debate ended when two boys opened fire at Columbine High School in 1999, killing 15 students, including themselves. In the wake of that tragedy, the worst incidence of school violence in our nation’s history up to that time, discussion shifted to which values to teach and how to effectively implement character education.

Character education programs have sprouted up around the country, some with astonishing, quantifiable results:

In 1993 the playground at Seattle’s Gatzert Elementary School, a high-poverty school where a third of the children are homeless, resembled a battlefield at lunch recess. The only way to control the first fights and violent behavior was to line up the 40 to 50 troublemakers along the school wall and keep an eye on them. Today only minor problems occur on the playground, and no children are lined up against the wall.

The successful transformation took a lot of hard work on the part of staff and students, according to Judy Ginn, a third grade teacher at the school. New staff, prevention intervention specialists, paying attention to changing the climate and culture at the school, and the Giraffe Heroes Project, a hands-on character education curriculum that she and other teachers at the school have used in their classrooms since 1994, all played a part.

Through the Giraffe Project, children work with adult volunteers and learn to be like giraffes – that is, animals who stick their necks out, have big hearts, are persistent, do no harm and make the world a better place through their actions. The children come up with community-based projects, such as canned food drives or anti-litter campaigns, which they organize themselves. In the process, they learn to work together for the common good and to contribute something positive.

In Albuquerque, New Mexico, at gang-plagued Garfield Middle School, Character Counts, a character education program that highlights six facets of character through a prescribed curriculum, was introduced with great success. In the first year, the number of recorded incidents of school violence declined from 91 to 26, according to Principal Louis Martinez.

After the Round Rocks School District in Austin, Texas, instituted character education as part of the curriculum, Jollyville School, an elementary school in the district with 576 students, reported a 40% percent drop in discipline referrals.

What is character education?

In his book, The Educated Child, William J. Bennett writes, “Good character education means cultivating virtues through formation of good habits.” According to Bennett, children need to learn through actions that honesty and compassion are good, and that deceit and cruelty are bad. He believes that adults in schools and parents should strive to be models of good character.

Character education is most effective when it is spread throughout regular school courses. In science, teachers can discuss the value of honesty in data, and in math, students can learn persistence by sticking with a problem until they get the right answer. History holds valuable lessons and heroes of character, such as the honesty of Abraham Lincoln, who walked three miles to return 6 cents.

During the 1960s and early 1970s, many teachers shied away from teaching about values because they did not feel it was their place to impose their own values on their students. But now they are seeing how including character education can transform a school community. In teaching the Giraffe Heroes Project, Ginn notes, “Values is an emotionally laden term. We avoid that discussion. The way we see it, we are teaching life skills, what you need to know to live in the world. We have to do this because it’s a cultural imperative that kids learn to get along.”

Not all character education programs are effective, according to Bennett. Lofty discussions about gun control, abortion and same-sex marriages don’t teach children right from wrong or how to get along with others. Beware of school administrators, he writes, who simply post signs that say “Help others,” or “Thanks for being kind today” and think they have done their job. Effective programs engage children in hands-on activities where good character is emphasized throughout the school environment as well as through the curriculum.

Character education includes having high standards for students’ academic success, too. “When they are challenged to work up a mental sweat, they learn about virtues such as industry and persistence,” writes Bennett. “When students rarely get homework, when they aren’t held accountable for mistakes in spelling or grammar or arithmetic, when they can put forth little effort but still earn high grades, schools foster laziness, carelessness and irresponsibility.”

Many teachers complain that parents are too lax and don’t provide enough discipline at home. Character education works best when schools and families work together. Here is what you as a parent can do to help:

• Ask your child’s teacher or principal whether the school has a character education program. If the school has a program, find out how well it is working and what you can do at home or as a volunteer at school to support the program. If the school doesn’t have a program, check the resources section below to learn about successful programs that you can help bring to your school.
• Ask to see your child’s homework. Encourage your child to establish good work habits. Be firm in your expectations that your child complete his assignments neatly, thoroughly and on time. Set limits, such as “No television until the homework is complete.” Check to see that assignments get returned to your child, and that the teacher makes corrections and sets high standards.
• Take action if your child is learning bad habits or shows a lack of discipline. Express your concerns about bad habits to your child’s teacher or bring up the topic at the next parent-teacher conference.
• Demonstrate courage, respect and compassion through your actions. Talk to your child about good character, and model the behavior you want your child to have. Talk about other people you know who are examples of good character.