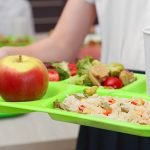 Beyond the food fights: helping schools get healthy

School districts are now required to have formal wellness policies, but battles over school food and how to best improve kids' health rage on.

In many schools, bagels have gotten smaller. Whole-wheat wraps are replacing pizza. PE equipment includes pedometers and heart-rate monitors, as well as basketballs and hockey sticks.

Schools around the nation are stepping up the focus on health, in part because of the growing evidence that many of our kids are at serious risk and in part because of a federal requirement that every public school district participating in the federal lunch or breakfast program have a “wellness plan” in place.

But while sodas are scarcer in school vending machines, there’s been a backlash, driven be parents unhappy to see cupcakes become contraband. Attempts to ban the goodies caused a furor in a Virginia school in 2006, the Washington Post reported, and prompted the Texas state legislature in 2005 to pass the Safe Cupcake Amendment to protect the rights of parents to keep sending the treats to school.

And everywhere, school officials and parent groups struggle to figure out how to pay for programs and equipment.

The stakes are high: A report in the 2005 New England Journal of Medicine forecasts a decline in Americans’ lifespans — the first in modern times — because of the rise of obesity.

The federal legislation requires each district to involve parents, students, food service staff, administrators, school officials and the public in developing a policy that includes:

It’s too soon to know how effective these wellness policies are in improving children’s health. Action for Healthy Kids, a national advocacy group focused on children’s health, took an early snapshot (by looking at the policies adopted in a small percentage of districts. The group found that of 112 urban, suburban and rural school districts, only 54% of the districts met the minimum federal requirements.

Because schools face budget constraints and increasing pressures to improve academic achievement-and because there’s no penalty for failing to comply with the wellness requirement — parents, community members, governments and other organizations are enlisting in the battle to improve kids’ health.

“Policies tend to be broad and vague,” says Nora Howley, deputy director of Action for Healthy Kids. “The devil, as they say, is in the details.”

What can parents do?

One way parents can get in involved is to help find ways to pay for new programs that promote health. More foundations and corporations are funding such efforts.

“Parents often have very significant contacts in the community,” Howley says. “They might be able to find a company to underwrite the cost of putting in a salad bar.”

One mother who led a successful effort to get junk food out of San Francisco schools says involved parents can make a difference.

“Don’t be afraid to make an issue of this,” says Dana Woldow, a mother of three teenage boys, who has led the effort to change San Francisco schools’ nutrition rules. “Just because a policy is there doesn’t mean it will be enforced. And just because you have a policy doesn’t mean it can’t be improved. Nutrition is an emerging science.”

A number of states and school districts have laws or policies that are much stricter than what the federal government requires. San Francisco, for example, already had a “no empty calories” policy that not only barred junk food but required all snack foods sold on campus to add nutritional value to student diets. Fresh fruit grown locally was added to the menu in school lunch and breakfast programs in 2006, thanks to a partnership among local organizations and local foundation support.

Do they have to eat tofu?

In San Francisco, Woldow is quick to challenge critics who say kids don’t like healthy food and that banning junk will cost schools money. She said her group of middle school parents tested both notions at their school. First, they surveyed the kids about food preferences.

“The single most requested item was a deli sandwich,” she said. That meant tuna salad on a roll or a turkey sandwich with lettuce and tomato, both healthy choices.

“It doesn’t have to be tofu and broccoli surprise,” she said.

Revenue from food sales increased, she said, and so did sales from vending machines, now soda-free.

Was there opposition? Yes, briefly from the kids, but they soon adjusted to the menu. There were bureaucratic obstacles to phasing in the project districtwide, and protests from some parents accustomed to funding high school proms with pizza sales. While she says she’s sympathetic to the fund-raisers’ complaints, Woldow says kids’ health is worth the cost.

The discussions about physical activity goals coincide with two conflicting trends. On one hand, a new movement in physical education is reinventing the concept of gym class. At schools that have embraced the “new PE,” parents (who remember dodge ball tournaments that humiliated all but the most athletically gifted) now have children who are snowshoeing, inline skating and power walking — and potentially forming fitness habits to last a lifetime.

“Thirty years ago, programs were based on team sports,” says Jacalyn Lind, president of the National Association for Sport and Physical Education, the national organization of physical education professionals. “Now there are adventure-type activities. Some schools are putting in climbing walls. Dance is another option. It really teaches rhythm and body control.”

But these classes aren’t the norm.

Shape of the Nation, a survey released in 2006 by NASPE and the American Heart Association, showed that although most states require physical education, they don’t mandate a specific amount of time for it. About half of them allow students to be exempted or to substitute other activities. The survey, which is conducted every five years, found that the percentage of students who attend daily PE classes dropped from 42% in 1991 to 28% in 2003.

In many districts, schools have cut back on regular physical activity because of tight budgets and the pressure to use the time for academics. While there’s little disagreement on the need to get kids moving, school leaders are having trouble figuring out how to do it.

The trend to cut back on physical activity spurred the American Academy of Pediatrics to issue a report emphasizing the importance of unstructured play in a child’s development and the PTA to organize a campaign to rescue recess.

Working physical education into the school day has been tougher to do for many school districts.

But many health professionals say that with the health of the nation’s kids at risk, it should be a priority. In a statement issued in 2006, the American Academy of Pediatrics called for schools to reinstate daily physical education from kindergarten through high school.

Phillip Lawler, a pioneer in the movement to transform physical education, concurs.

Lawler, a veteran PE teacher, has earned accolades around the nation for the middle school physical education program he started in Naperville, Illinois, in the 1990s.

Lawler scrapped the focus on team sports, which rewarded the jocks but didn’t give even the star players the education they needed to maintain good health after their playing days were over.

Instead, he focused on establishing baseline fitness levels for each student, and teaching each one how to improve her cardiovascular fitness and muscular strength. He used heart-rate monitors and other technology, although he says gadgets aren’t necessary to give students a high-quality physical education. And he gave students a range of activities to try. His model has been put into practice by the nonprofit PE4Life, which spreads the word through its fitness academies.

Lawler cites brain research about the impact of physical activity on brain development, and says he has incorporated literacy drills into a PE class for struggling high school students. He’s convinced, he says, that “a fit child learns better.”