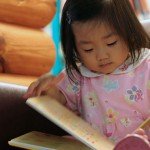 Should my young child already be reading?

The pressure is on for parents to teach their children to read at a young age. So should you or shouldn't you? The answer from reading experts may surprise you.

Not long ago, I woke up at 3 a.m. in a panic: Should my 4-year-old be reading by now? She loves it when we read to her and recognizes a few simple words, but isn’t reading on her own yet. Should we be teaching her to read? Had I “missed the memo” that explains how?

This anxiety reared its head just when I had started to relax, thinking we had escaped the toddler years relatively unscathed. I can’t remember the last time my daughter had a full-blown tantrum. She’s finally easing out of the nails-on-chalkboard “baby voice” phase. And these days we can actually leave the house in under five minutes when we have to — shoes (and underwear) on, hair mostly brushed.

In the middle of that dark night, however, I was certain my husband and I had failed at one of the crucial tests of parenting: our daughter doesn’t yet know how to read.

The very first thing the next morning, I ordered, Teach Your Child to Read in 100 Easy Lessons and breathed a sigh of relief that I hadn’t neglected a key parenting responsibility. But when I received the book a few days later, I was struck by how un-easy these 100 (100!) lessons seemed. It now sits gathering dust on a shelf in my bedroom.

The drumbeat to push even the youngest kids to read and attain other academic milestones has grown steadily louder over the past decade or so. And when you’re the parent of one of those kids, it’s hard not to pay attention. Who doesn’t occasionally wonder if their play-based preschool is really prepping their child for kindergarten reading? Who doesn’t want their own child to be as smart as a friend’s precocious three-year-old who can already read Green Eggs and Ham? Who doesn’t dream of their child getting a full ride to Harvard or Stanford?

A few of the findings parents encounter on the journey to kindergarten help fuel concerns about young children and reading. Consider these:

•the quality of a child’s language environment at age three is a strong predictor of tenth-grade reading achievement
•a child’s vocabulary at 4 is predictive of third grade reading comprehension
•and scariest of all: a child who doesn’t read proficiently by third grade is four times more likely to leave school without a diploma than a proficient reader, according to  research by the Annie E. Casey Foundation

Parental worries (and pre-dawn anxiety attacks) have fueled a thriving market of early reading programs, books, and other products. In Manhattan, parents are shelling out big bucks for prep programs to cinch sought-after spots in gifted and talented public kindergarten classes. For the more budget-conscious, the Your Baby Can Read! DVDs and flash cards let parents do the training themselves for a fraction of the cost — that is, until the company went out of business in July, 2012, after its tactics were challenged in a “Today Show” investigation, a complaint filed with the Federal Trade Commission, and numerous class action suits.

The problem, researchers say, is that no one knows if pushing your young child to read makes any difference. “There’s no evidence that teaching children to read early is a good thing,” says Dr. Susan B. Neuman, a professor of education at the University of Michigan who specializes in early literacy development. “There’s no evidence that says it’s a bad thing either, but there’s just no evidence at all, so parents might be wasting a good deal of their own — and their children’s — time, when they could be doing other things that really do promote early literacy.”

Still, with the national focus on reading brought about by No Child Left Behind and the implementation of Common Core standards in the classroom — not to mention fierce competition for enrollment at top schools and universities — many parents feel increasing pressure to get their kids reading as soon as possible to ensure their academic success.

“We see an awful lot of parents who are trying to teach their children how to read very early on, in infancy as a matter of fact,” Neuman says. “We think that some of this early push might be more focused on the parents’ needs than the kids’ needs.”

“I find the phenomenon shocking,” says Dr. Shannon Ayers, assistant research professor at Rutgers University’s National Institute for Early Education Research (NIEER). “But I don’t blame the parents. Every parent wants what’s best for his or her child. But they’re hearing about this so-called ‘window of opportunity’ before age 5, and they get scared. The bottom line is: yes, there are critical skills your young child needs before they enter school, but these skills are ones that they can learn through play and through their life experiences, not flash cards.”

What young children need to read

In fact, the evidence has shown time and again that very young children learn far more through play than they do in a “strict” academic environment, according to Alison Gopnik, a researcher at UC Berkeley and author of The Philosophical Baby: What Children’s Minds Tell Us About Truth, Love, and the Meaning of Life. Pretend play teaches children how to understand themselves and their world, leads to better adjustment in school, and helps turn them into what she calls “flexible and sophisticated thinkers.”

Joan Kelley, a language and literacy researcher at Harvard University, thinks part of the problem is that parents don’t really know what it takes to learn to read, so they’re willing to spend a lot of money on products that promise concrete solutions. “While children do need to know about letters and sounds, that’s just one piece of a very complicated puzzle when it comes to how kids learn to read,” she says.

Kelley says the most important thing parents can do is to create a rich language environment at home. This means working to balance the instructive talk we do with our kids all day (“Brush your teeth,” “Feed the dog”) with what Kelley calls “elaborative” language. She uses the example of pushing a 1-year-old in a stroller and seeing a “Lost Cat” sign on a telephone pole. You could walk right past it, or you could elaborate on the sign by saying something like, “Oh, no, someone lost their cat! Look, the sign says his name is Fluffy. Nana has a cat named Muffy. Fluffy-Muffy, Fluffy-Muffy, hey that rhymes! Remember in the Curious George book when the cat ran up the tree? Do you think Fluffy might be hiding in a tree? Let’s take a look.”

“Elaborative language makes connections in the brain — you can almost see the neurons snapping,” Kelley explains. “Every time I see a parent talking on their cell phone while pushing the stroller, I cringe, thinking about all the opportunities for building language that are being lost.”

Education professor Susan Neuman agrees that supporting your young child’s learning doesn’t require special preparation or expensive products — it just means showing up. “Parents can support early literacy just by taking advantage of all the regular routines of their day — going to the grocery store, going to the bank, following a recipe,” says Neuman. “All of these activities get children used to seeing print in functional settings and help with reading.”

When to worry about reading…when not to

There are some children for whom reading comes very easily and there are children at the other end of the spectrum who struggle a lot. But Ayers says that kids in the middle of the bell curve — the vast majority — should learn to read at a normal progression with appropriate stimulus and support.

In general, boys start reading later than girls do — boys tend to be later in showing interest and later in getting started — but they generally catch up right away once they start, according to Neuman. She recommends tailoring reading time to a boy’s gross motor energy — keep it short, sweet, and relevant.

Typically, most children will start reading in the first grade. If, by the beginning of second grade, your child hasn’t shown an interest in reading or a teacher has raised concerns about your child’s reading progress, Ayers says you shouldn’t panic, but you should take decisive action. “Once you’re aware of an issue, you just have to start intervening,” she says. “Ramp up their reading environment both at school and at home and support them however you can.” Consider consulting a reading specialist if the problem persists.

But chances are, you’ve been doing the right things all along. “The number- one thing you can do is talk to your kids and read to your kids from the earliest of ages,” Kelley says.

•Visit the library every week and befriend the children’s librarian to get good, age-appropriate book recommendations. “Having new books every week breeds excitement about reading,” says Kelley. “Get all kinds of books: ones have repetitive language, books that challenge them a bit, nursery rhymes.”
•Encourage your child to write. “Give her a pen and paper when you’re playing restaurant so she can take your order,” says Ayers. “It’s amazing to see the progression from scribbles to actual letters over time.”
•Show your child nonfiction books as well as story books. “Some young children, especially boys, are drawn to information books instead of stories,” says Neuman.
•Stick with real books instead of electronic ones. Ayers quotes research showing that with electronic storybooks, parents talked about the book only 59 percent of the time (the rest of the time was spent saying, “push this button,” etc.), whereas with a traditional book, 92 percent of the parents’ time was spent talking about the story.
•Expose your kids to big ideas. “Instead of the usual ‘How was your day?’ conversation, talk to them about something you read that was interesting,” says Kelley. “It stretches and excites your kids and helps them prepare to enter the world of reading with more understanding.”