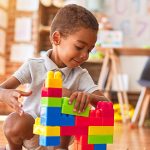 Why early math is just as important as early reading

According to new research, the importance of mathematics in early childhood cannot be underestimated. So what grade do U.S. preschools deserve in math instruction?

Answer: F (At least most of them.)

Math is nearly absent in American preschools and prekindergarten classes. One study calculated that at preschools where kids spend six hours a day, math gets an average of only 58 seconds per day. Not even a full minute.

What’s more, those spare moments of math are often taught incorrectly. Learning to recite numbers from one to 10 doesn’t get kids very far, because often kids are just memorizing, according to Stanford math professor Jo Boaler, which does little to lay the groundwork for future problem solving and logical thought.

Why is mathematics important in early childhood? “Early math skills have the greatest predictive power, followed by reading and then attention skills,” reports a psychology squad led by Greg J. Duncan, in School readiness and later achievement, published in Developmental Psychology in 2007. Follow-up studies continue to confirm the importance of early math skills. The more math-oriented activities kids do before kindergarten, the better they’ll understand math in school. Early math skills foretell higher aptitude in high school math and higher rates of college enrollment. And a 2014 Vanderbilt study determined that for “both males and females, mathematical precocity early in life predicts later creative contributions and leadership in critical occupational roles.”

Why counting doesn’t cut it

To date, the most common approach to teaching early math skills has been to surround young kids with numbers alongside their letters and encourage them to practice counting just as they practice singing the alphabet. But researchers say that this approach is short-changing children. In her essay “Math Matters, Even for Little Kids,” Stanford professor Deborah Stipek (co-written with Alan Schoenfeld and Deanna Gomby) explains the parallel to the alphabet: “Learning to count by rote teaches children number words and order, but it does not teach them number sense, any more than singing the letters L-M-N-O-P in the alphabet song teaches phonemic awareness.”

As for the magic of counting to 10, University of Chicago professor Susan Levine explains: “Kids can rattle off their numbers early, often from 1 to 10, and parents are surprised and impressed. But it’s a list with no meaning. When you say ‘give me 3 fish,’ they give you a handful.”

While parents and preschool teachers reinforce literacy lessons daily by reading together, singing, pointing out letters and letter sounds, math exposure often begins and ends with the counting.

Evidence points to early addition and subtraction being an innate ability. In a 1992 study at the University of Arizona, for example, 6-month-old babies were shown one baby doll. As the babies watched, a screen was placed in front of the doll and then a second doll was placed behind the screen. When the screen was removed, scientists could tell that, at just 6 months old, babies expected to see two dolls. In instances when there were fewer or more dolls when the screen was removed, the babies stared longer because the results were wrong, a “violation of expectation.”

“Subitize” — from the Latin word for “suddenly” — is the ability to quickly identify the number of items in a small group. When Dustin Hoffman’s character in Rainman looked down at the pile of spilled toothpicks and knew without counting that there were 246, that was an example of advanced subitization. Preschoolers can differentiate between one and three items; by age 7, this increases to between four and seven items. It’s more than just a cool party trick: Research indicates that developing the ability to subitize larger numbers can increase math skills in a few ways. One example is “counting on” or being able to start at 5 and continue counting up, which is a math strategy first graders will need as they begin tackling adding and subtracting.

Numbers in new and different contexts

One way to build on kids’ innate math abilities is to focus on helping them count in contexts that are meaningful to them. To practice counting on, start with a number they recognize, like two toy dinosaurs. Add another and say, “three,” then add another and say “four,” helping them to connect the number names with the increase in objects.

Toddlers are natural sorters. By age 2, they start recognizing and making comparisons, such as more, same, and different. They enjoy organizing multiple objects into specific “sets”, i.e., groups or categories. Asking a child to sort their prized dinosaurs into groups, such as big and small, is the basis of a few important early math skills. First, they can compare the groups. (There are more small dinosaurs.) They can count how many are in each group (two big ones, six small ones). They can re-sort in different ways (the ones with spikes here, the ones without spikes there; arranging the dinosaurs in order from shortest to tallest). Numeracy is an intimidating word, but it simply means understanding what each number represents and beginning to understand the implications of number operations: What happens when you take one of the dinosaurs away?

The National Association for Education of Young Children notes that young children are building scientific inquiry skills when they sort, compare, describe, and put things in order in terms of observable characteristics, like the dinosaur’s height.

Children are rightfully fascinated by variability in size. They delight in the enormity of elephants, trees, and skyscrapers, and the minuteness of ants and caterpillars. The allure of discovering what’s comparatively bigger or smaller fosters their curiosity about inches, pounds, gallons, miles, and other systems of measurement. And that’s what parents and educators should encourage, according to Douglas H. Clements and Julie Sarama, authors of Learning and Teaching Early Math: The Learning Trajectories Approach. Clements and Sarama suggest that measurement is the best way for young kids to learn about math. They go so far as to say it’s better than counting. “We use length consistently in our everyday lives,” they write. “[Measurement] can help develop other areas… including reasoning and logic. Also, by its very nature, [measuring] connects two critical domains of early mathematics: geometry and number.”

Building blocks and the language of space

The next time you’re cleaning up your child’s blocks or Legos, just remember: they’re building their math brains. Boosting spatial skills via block play has been proven beneficial in many studies. For example, the complexity of a child’s LEGO play during the preschool years is correlated with higher math achievement in high school.

Exposing preschoolers to geometrical shapes including circles, squares, triangles, and rectangles helps them build a skill called visual literacy. Researchers Clements and Sarama discovered in one study that kids who learned shapes and spatial skills also showed pronounced benefits in math and writing readiness and even increased their IQ scores. (Related: How to teach your preschooler shapes and spatial skills.)

Clements urges parents and teachers to teach kids what he calls the “Language of space” – words like front, back, behind, top, bottom, over, under, last, first, next, backward, in, on, deep, shallow, triangle, square, corner, edge, etc. Stipek, former dean at the Stanford Graduate School of Education, suggests “when you’re reading a picture book to your child, point out position and spatial representation. Say, ‘the tree is behind the car’ and ‘the roof is a triangle.’” Helping a preschooler understand these relative terms is more than a math vocabulary lesson, says parent educator Nancy Gnass. It’s hard for a child to follow spatial directions commonly given to kindergartners – stand behind the blue line, put the blocks on bottom shelf, this is a quiet corner – if they don’t know what behind, bottom, or corner mean, she says. Preparing your child for directional language they’ll be expected to comply with regularly once they start school can head off misunderstandings and perceived behavior issues, like not understanding rather than deliberately not following directions, she says.

Visual art and dance provide excellent ways to teach patterns, defined in A Math Dictionary for Kids as ”a repeated design or recurring sequence.” According to Zero to Three, recognizing and creating patterns helps children learn to make predictions, understand what comes next, make logical connections, and use reasoning skills. Kids start to put together the “growing pattern” in counting and “relationship pattern” that’s the basis for multiplication.

Movement patterns can also imbue a trip to the park with mathematical benefits. Encourage your kinetic kid to walk-tiptoe-jump-repeat or skip-hop-run-in-a-circle-repeat, or stop, drop, and roll; repeat until they’re exhausted (and educated). (Related: Cool ways to teach your preschooler patterns)

Bring on the math games

The best way for parents to “mathematize” their children is to use math in the routines of daily life, either as games or as entertaining ways to solve problems. “Make math fun!” advises Eric Wilson, Lead Teacher at Pacific Primary School in San Francisco. “Young children work very hard when they’re playing. Play is the perfect learning environment.” Puzzles, building blocks, board games, and card games have all been studied, with researchers concluding that all of these elevate math skills.

Possibly the most important thing any parent or teacher can do for preschoolers’ early math skills is encourage children to believe that they can succeed. “Self-efficacy, which is an individual’s belief in whether he or she can succeed at a particular activity, plays an integral role in student success,” writes math educator Lynda Colgan of Queen’s University in Ontario, Canada in an article for TVO.org — and that extends to any subject.

“When children are positive about learning and feel able to succeed, they are more likely to be successful.”

Why worry about math now?

“Math is the language of logic,” explains Dr. Jie-Qi (Jackie) Chen, professor of Child Development at the Erikson Institute, a principal investigator of the Early Math Collaborative, and co-author of Big ideas of early mathematics: What teachers of young children need to know.

“Math builds reasoning, which leads to comprehension,” she says. “Developing a mentally organized way of thinking is critical.” To make that happen, Chen says, “We need to provide high-quality math education at an early age.”

She’s right, but are PreK parents and educators listening? Let’s not pretend our children will “catch up” in later grades. In the Program for International Student Assessment, an international assessment that measures 15-year-old students’ reading, mathematics, and science literacy every three years, U.S. test scores in math are embarrassing. In 2012, out of 34 OECD contestants, the USA ranked #27 in math. (We’re #17 in Reading, and #20 in Science.) American students are especially weak in “performing mathematics tasks with higher cognitive demand… and interpreting mathematical aspects in real-world problems.” Quite dismally, 26 percent of 15-year-olds in the U.S. fail to reach the PISA baseline Level 2 of mathematics, where they would “begin to demonstrate the skills that will enable them to participate effectively and productively in life.”

So, what can parents do? Without being a total pain-in-the-behind (I’m using a “spatial” term here) you could talk with your child’s preschool director about how they approach math in their daily activities. Talk with them about the value of sorting, measurement, patterns, the language of space, block play, building on innate mental addition skills — and most of all the value of a positive attitude toward math. You might even print out this report: Math Matters: Children’s Mathematical Journeys Start Early by Deborah J. Stipek and Alan H. Shoenfeld and share it with the preschool staff.