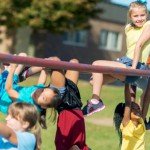 Reading and writing isn't the only way kids learn. (So don't skip the playing!)

We send our children to school to learn. But did you know that they’re also learning when they’re playing?

By play we don’t just mean organized team sports. And we definitely don’t mean sitting in front of a screen playing computer or video games! Healthy play means making sure your child uses her body and mind in active, imaginative play — like playing hide-and-seek, riding a bike, building with blocks or Legos, pretending to be a pirate or princess, building a fort, playing dress-up — all activities that come naturally to kids. This kind of play develops a child’s ability to think creatively, use her imagination, work as a team member, and create and follow rules. Kids need unstructured time to build, create, and fantasize.

There’s been plenty of scientific research over the years proving that play has an important role in children’s development and their ability to learn. So whether it’s pretend play, sports, outdoor time, or recess time — let the kids play!

Here are a five ways kids grow their minds and bodies through play: