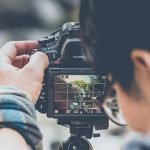 Lights! Camera! Action! Working in the film industry is a dream job for many teenagers. It’s creative, complex, and emotionally expressive — and it's in high demand.

Editor’s note: This is part of a new series spotlighting promising career paths that are filled with opportunity — yet don’t require a four-year college degree.

John Behrens, 44, is living his dream — even though he left academia on the cutting room floor. He’s an independent Director of Photography based in Oakland, CA, and works on exciting projects — from shooting Metallica concerts to BMW commercials to feature-length documentaries. “I’m self-taught,” he says. “I worked in community theater, where I learned about lighting, acting, storytelling,” he says. But he and a high school buddy took it from there, teaching themselves filmmaking skills that helped launch his career.

How he got started

Behrens landed his first job via a chance encounter. “I ran into a film shoot, when I was in high school, near Good Guys in Corte Madera. The gaffer said I could hang out and watch. Later he gave me a broken light and said, ‘If you can fix this, I’ll give you a job.’ I took the light home and got out my electrical tools and fixed it and he started hiring me. He even gave me his old equipment; I got a car trunk full of light stands and gels.”

After high school, Behrens enrolled at San Francisco State University (SFSU). He only attended for three semesters and he says he only remembers two classes: “Intro to film studies, and a production design class that had a fantastic instructor.” Halfway through his third semester, he got a job as the best boy electric working on a low-budget film set partly in Clear Lake. “I was working 12-hour days, so I flunked out of school and never went back,” Behrens says.

What it takes to become a director of photography

Problem-solving is just one of the many skills needed in this profession. Camera operators need visual skills, hand-eye coordination, and physical strength to lug heavy equipment around. Directors need creativity, leadership, time-management, and communication skills. Ambition and learning quickly are also useful for climbing up the cinematic ladder. Newbies, like Behrens, often start as best boy electric and work their way upward in responsibility and salary via roles like gaffer, grip, camera assistant (also sometimes known as the focus puller or the clapper loader), and camera operator on their way to becoming the director of photography or DP.

His day-to-day life is both completely consistent and totally varied. “I gather my camera and lighting and other equipment. I show up at the location, which varies — I might have to catch a plane,” Behrens explains. “When I get there, I talk to the director and producer about what their goal and vision is. We set upon equipment, and then we shoot images and record some stuff, and hand it off to the editor at the end of the 10 to 14 hour day.”

Behrens sees his job as a “combination of science and art.” He enjoys the technical challenge of using new equipment, and the “super-educational” opportunity to become an expert on the documentary topics. “I’m going to shoot a film for Nova,” he enthuses, for which he’s learning all about the possibility of life on other planets and interviewing astronomers and scientists. The documentary will take two years, he says. “It’s like getting a master’s degree.”

Why is photography direction such a fast-growing profession?

As the best boy electric Behrens earned $300 a day. Today his salary varies with the projects he takes on. Nationally, the average salary for “directors” is $70,950 according to the Bureau of Labor Statistics, while the Hollywood Reporter suggests that directors earn at least $10,000 per week.

Since Behrens, like many directors of photography, works on projects, he’s paid on a project basis and so doesn’t enjoy the safety of a regular paycheck. “I don’t like the financial risk,” admits Behrens. “If there’s an economic downturn, video budget is cut first.”

The happily ever after

In filmmaking, the top of the profession earns worldwide praise, gold statuettes, and overexposure by the paparazzi. Behren’s five-year goal is “to develop my own television show or web series — a science and education program for kids and adults who never grew up. I’d want it to be real science but very accessible and funny.”

What’s the takeaway from Behren’s tale? If your teen wants a career in filmmaking but doesn’t want four years of college, the silver lining is: it’s attainable. With technical skills, aptitude, perseverance, creativity, practice — and a bit of luck and a knack for making strong personal connections — your teen can be making movie magic.

This is part of a new series highlighting post-high school pathways to success for teens whose plans don’t include four-year college. These are careers with great growth potential that don’t require a four-year degree. Read our list of 42 up-and-coming careers that don’t require college (and 10 to avoid) and read our other career spotlights on dental hygiene, radiology technologist, and web development.