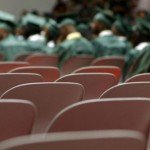 Advertisement
Parenting » Emotional smarts » Dropout Nation: an inside look at why our kids aren’t graduating

Dropout Nation: an inside look at why our kids aren’t graduating

Kids are dropping out of high school at epidemic rates. A revealing new documentary follows students at a “dropout factory” in Houston to show students’ incredible obstacles and how educators are fighting back. But it begs the question: where are the parents?

Sparkle, a high school sophomore, has a child — and she’s homeless. “School and life are two different things,” she says. Her teacher says she’s been in class “five times in the last five weeks.” Marcus says his parents are great — when they’re sober. He has a shot at going to college because of his football skills — if he remains eligible. As a 19-year-old, Lawerance should have graduated last year but his anger — leading to outbursts and defiance — has gotten in the way. He says he doesn’t want to be “like everyone else”: he wants to be different and graduate from high school.

These are just a few students at Houston’s Sharpstown High School, a “dropout factory,” where less than 60 percent of the freshman class are still enrolled their senior year. But this year is different, because Sharpstown is one of Houston’s experimental Apollo 20 schools, a district initiative betting that a combination of effective educators, increased instructional time, data-driven strategies, targeted tutoring, and a culture of high expectations will be enough to turn around the school “where the pregnant girls go.” To document these efforts, producer Frank Koughan, co-producer Lisa Kalikow, and their film crew spent February through June filming at Sharpstown three or four days every three weeks, capturing the stories behind the stats including everything from angry tears to a pregnancy test. Schools are notoriously defensive about letting journalists or, worse, filmmakers roam the halls, but Koughan and his film crew got special access, perhaps because with a dynamic new staff that’s excited about turnaround efforts, no one has reason to feel defensive.

“The year before we started filming, they cleaned house,” Koughan says. The district got a new Superintendent, and about 85 percent of the teachers and the principal had been replaced, Koughan says, and the new staff is keenly aware of being part of something — hopefully a solution. So while Koughan tells the story from the students’ point of view, he also includes the new principal, teachers, and an ultra-involved campus improvement coordinator (whose personal dedication includes letting a problematic student move into her home) because their presence adds perspective. The kids are “aware of their predicament,” Koughan says, but they know no different: “they just think it’s life.”

Overall, our nation’s “official” dropout rate has been falling for two decades — from 12.1 percent in 1990 to 7.4 percent in 2010, according to the U.S. Department of Education, National Center for Education Statistics (2012). It looks like progress, right? In truth, the rate may be much higher. By all accounts, our true dropout rate is difficult to ascertain. Frontline, for instance, estimates it could be closer to one in four — and higher in some cases.

In a telling portion of Dropout Nation, educators and administrators demonstrate how the statistics are muddied — at least at their school. When kids withdraw from school, they are given “leaver codes,” which affects how the dropout rate is calculated. For example, one child profiled in the film had dropped out of school twice before returning. Each time he withdrew, he told the school he was going back to Mexico (despite being born in the U.S. and having no intention of leaving the country). His leaver code, however, is twice shown as moving, not dropping out. Even more troubling is the leaver code they see all too often in senior year: transferring to private school. At a school where, according to the principal, “poverty is the common denominator,” these aren’t your ordinary private schools. For a fee, say $300, they’ll give a child a packet with a take-home test. Once complete — snap — the child gets a diploma. One administrator saw the results in person: a diploma issued to a child (not a senior) who had withdrawn from school that morning. Sometimes called a “diploma mill,” this kind of loophole portends a much bigger problem than the official numbers show.

Where are the parents?

As we’re drawn into each child’s life, parents are present only in their absence. It’s the educators who we see filling in the gaps. Take Brandi Brevand, for example, the devoted campus improvement coordinator who often calls kids to wake them up and/or picks them up to drive them to school. Brevand laments that in addition to the job schools are charged with — academics — the school’s staff spends “70 percent of the time” on issues that parents should be covering, like whether the children are eating breakfast, getting to school on time, going to school at all, behaving respectfully, navigating life choices, etc. The list goes on and on.

A film worth watching

The film manages to make the gravity and urgency of the problem come to life. During one scene in a class called “The game of real life,” which mimics the board game, students get a chance to discuss their possible life outcomes. They talk about two paths before them — college and prison. This moment captures the painful dawning for many of these kids just how grave their situation is — but at this point, there’s still hope. By the end of the movie, when we see the shocking number of empty chairs at graduation, we realize just how many have slipped off the tracks.

A film worth watching: Frontline’s Dropout Nation debuts at 9 pm EST on Tuesday, September 25, 2012 on PBS. Watch the trailer here.