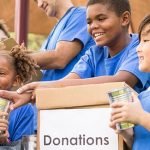 An expert on getting kids to see the point in giving offers strategies for teaching elementary school students the gift of generosity.

Aside from competitive pie baking and the even more competitive pie eating, Thanksgiving is traditionally a time when many Americans practice generosity. Families volunteer at local soup kitchens or invite lonely neighbors to share in their feasts of cranberry sauce, turkey, and mashed potatoes. But if you really want your kids to learn the value of being big-hearted, such gestures shouldn’t be limited to the fourth Thursday in November, says child development expert Robyn Silverman.

Silverman, who holds a Ph.D. in child development from Tufts University, developed Powerful Words, a character education curriculum taught in nine countries, which devotes a month to teaching children about generosity. She argues that this trait is teachable to every age as long as parents keep in mind one key point: Generosity is an activity that brings as much pleasure to the giver as to the receiver.

GreatSchools asked Silverman to share her tips for instilling the joys of giving in children year-round.

Robyn Silverman: In Powerful Words, I did a generosity project for the kids, and I said: “I want you to hypothetically come up with an activity that would help somebody else.” I gave examples, like a charity event, but said they could come up with their own.

Two kids who lived in Dairy, N.H., wrote about doing a project for the Dairy Humane Society. They were eight years old. It was going to be called the Furry Friends Project — they planned it out. Then they went to the teacher and said: “Do you think we can do this?” The teacher went to the principal, they wound up presenting it to the school board, and they actually had a full-town charity event.

GreatSchools: What similar activity could a parent do at home?

Silverman: Get kids thinking about these things. Give them some examples — do some brainstorming with them. Say: “We can do anything. We can help anybody. Children, the elderly, dogs, cats, the rainforest. What would interest you?”

Ask the open-ended questions that gets kids thinking at that age, instead of closed-end questions with “yes” or “no” answers: “What would you like to do? Who can we ask to help?” This is going to help them take ownership. It also gives them the pride that they were really the ones who came up with the idea, even though you may have helped out.

Urge them along and encourage them to take some initiative, instead of you taking the reins. You want your kids to have their own thoughts and their own actions, and see the response that they get when they are generous. That is what is going to solidify their interest in being generous.

Even though generosity is one of those words that seems selfless, it does help children feel better about themselves. It helps with self-esteem. You do get something back. We want those kids to feel that even though it’s not materialistic, they are getting feelings of pride that makes them feel really good, and then they’ll want to do it more.

GreatSchools: Are there any mistakes parents make at this age that inadvertently teach selfishness?

Silverman: Not giving the child time to do generous acts: “You’re so busy — you’re doing all these activities.” It’s great to do activities, but we also want to have time to give back to others.