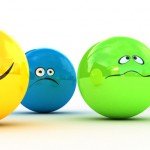 Advertisement
Parenting » Emotional smarts » There’s an app for that feeling

There’s an app for that feeling

New tech tool helps kids and parents regulate a rainbow of emotions to build their EQ.

As parents, we are a lot of things. Exhausted. Invigorated. Or simply contented with the do-the-laundry, make-dinner-again banality and wonder of raising a human being. But in the heat of the moment — even a perfectly lovely parent can transform into what my friend Elisse refers to as “the momster.”

I’m no different. Depending on the day, I can be a testy parent after a hard day at work, an anxious one due to money woes, a sad one because of aging parents — one moment I’m calm and sweet with my two children; the next, I’m a harried and irritable momster.

Then a few weeks ago, I discovered the Mood Meter — a new app from the Yale Center for Emotional Intelligence designed by the center’s founder Marc Brackett, who is nothing less than a zealot when it comes to building our emotional intelligence.

“It’s ridiculous it has taken this long for people to realize how important emotions are to our daily functioning,” says Brackett. “When we’re in an emotional state, we get overwhelmed by our emotions. But just saying, ‘I’m disappointed, I’m frustrated,’ really helps you have a better understanding of what’s happening.” It’s not just a nice idea, Brackett says, but a truth based in the latest neuroscience: we can train our brains to self-regulate how we respond to stimuli so we’re not constantly victims of our own emotions. “If you understand when you feel certain emotions, it affects how the brain operates,” says Brackett. “We have the ability to make a choice about how we express and regulate our emotions.”

The Mood Meter is already being used at a number of schools. Brackett explains that it has helped many emotionally challenged kids check in with why they’re acting so fidgety or anxious and learn to bring their energy level down. One 10-year-old student described how the tool helped him tamp down the anger he had toward a friend: “I went to the Mood Meter and expressed my feelings to one of my closest friends, and that helped me change my mood. I needed to tell somebody that I was really mad and get that over with so I could just be calm.”

The Mood Meter divides emotions into four color quadrants — red for the hot emotions (from furious and nervous to annoyed and peeved), yellow for the invigorated ones (from enthusiastic and hopeful to elated and ecstatic), blue for blues (pessimistic, morose, sad, tired), and the calm greens (calm, secure, grateful, balanced). The app lets you set reminders to check in with how you’re feeling throughout the day to raise your emotional awareness, not run roughshod over them. “You have to name it to tame it,” says Brackett. “That’s so critically important.” But once you really know what you’re feeling, explains Brackett, you can home in on that emotion and if it’s a tough one, you can bring it down several notches. Like any regular practice, the more you do it, the easier it gets.

And if you’re in the red or blue states, the app is great for suggesting ways to get out of them: “Call someone who cares about you” is one prompt; another example is an inspirational quote: “Most of the shadows in this life are caused by standing in one’s own sunshine.”

I’m not New Agey, but the Mood Meter worked wonders after a few days. Here I was, anxious on Monday because my husband was starting a new business, and down on Wednesday because my daughter had been crying the night before. Simply by checking into the Mood Meter, I was able to step back and look at myself from a meditative distance. “Aha!” I was able to say. “So that’s what I’m feeling. How can I change this?” It’s so simple, but just asking this question managed to take those bad moments and turn them around.

I showed the app to my 8-year-old daughter, the most emotionally intelligent person in our family of 9 (one father, one mother, one teenage brother, one spunky sister, one lizard, and four chickens), and she fell in love with it immediately. A dinnertime argument put her in a deep blue funk, and she asked me for the Mood Meter. I pulled out my smartphone, clicked on the app, and she went straight to blue, clicked on “Sad,” and after the prompt, “I’m feeling sad because…” she typed in, “… my brother was mean to me.” Then she clicked on how to shift her mood from blue to green. “Get some fresh air; take a walk.”

“Mom,” she whispered into my ear. “Let’s go take a walk right now.”

I was game. We headed out into a moon and starlit night and walked around our block. I’d been pretty purple that evening — a moody cocktail of fidgety-angry red and in-a-pout blue. But then my daughter and I, holding hands, inhaled that fresh air, talked about our day, looked up into the night sky, and within minutes, we moved into in a really, really good mood.

Want more ideas for chanigng your family’s mood? Check out our recent Google Hangout On Air with Marc Brackett and Lifetime’s Supernanny Deborah Tillman, who talked about how deal with the red zone emotions and raise kids with emotional smarts.